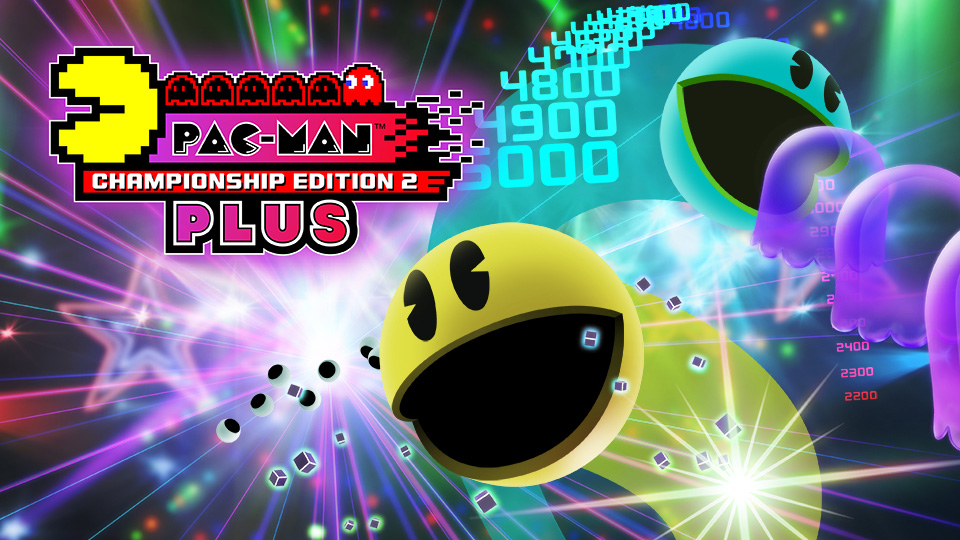 Everyone’s favourite Yellow pill popping, ghost evading Arcade hero is back on Nintendo consoles yet again, with his latest title to date, Pac-Man Championship Edition 2 Plus. Taking the original formula and mixing it up to a whole new level of extremes, only this time a friend can even join in on the fun as well. As you work together to get the highest score possible whilst trying to avoid bumping into Blinky, Pinky, Inky & Clyde, that is of course until you get the Power Pill that is.

Pac-Man has a history older than the mighty Donkey Kong himself, albeit by a year or so. Inspired by a Pizza with a slice missing, Game designer Toru Iwatani created a whole new genre to video games that had players control Pac-Man, navigating him around a maze, gobbling as many pills as he can to get the highest score possible whilst avoiding the four ghosts. Fruit and other special items would appear from time to time that would net the player bonus points and four Power Pills could be consumed, that would grant a temporary power to eat the four ghosts and gain even more points.

The name Pac-Man was never the original name, it was changed from Puck Man because of fears of Grafitti on the arcade Machines that would alter the P, so to make the Puck become something a bit more uncouth (I think you know what I am getting at. No Joke, it was initially called Puck Man). What originally started as a simple, “Work your way around a single maze” has grown over the years and Pac-Man spawned several spin-offs and sequels, including clones that were never created by Namco or Toru Iwantana himself like Ms Pac-Man for example.

Pac-Man Championship Edition 2 first saw release back in September 2016 on PS4, Xbox One and Windows PC and received relatively favourable reviews. Bandai Namco has now re-released the game on the Nintendo Switch, on February 22 2018. The Switch version makes use of the two Joy-Cons by bringing a Switch exclusive 2-player mode in Pac-Man Championship Edition 2 Plus 2P.

Graphically, the game has not changed much since its 2016 release, It’s frame rate is very good and I have not noticed any drops and it looks just as good on the TV as it does in handheld mode. All gameplay graphics are in 2D with animations done in 3D. There are various options in the game where you can change the appearance of the maze, backgrounds, characters and dots (they used to be called pills but I think a bit of remarketing has gone into this as to not encourage children to swallow pills in large doses). You can change these to fit whichever aesthetic you prefer, from the latest generation on Pac-Man to the really retro iteration. The Backgrounds can be chosen to suit your mood as well and are several different shapes and forms, usually in a neon colour palette. The 80’s may be over, but not for Pac-Man it isn’t.

The Music is funky and has a wicked “nightclub” feel. Like there is a rave party going on and everyone is invited. There may not be booze or glow sticks but when Pac-Man is getting his fill on every single ‘dot’ he can get, Someone is going to have a sore head in the morning. There are of course a number of tracks to choose from funky, to full-on rave fest and a couple more ‘gentle’ tracks for those that prefer not to raise their adrenaline levels to dangerous proportions.

The gameplay is very much like it has always been, relying on a single Joystick to navigate turns around the maze, whilst gobbling as many dots as possible. The first Championship Edition that released back in 2007 introduced following a ‘course’ of dots as opposed to eating all of the dots in each maze and moving onto the next maze by eating the fruit. A few more features were added in the DX edition that released in 2010 and Championship Edition 2 Plus brings its own to further add more challenge and uniqueness. You can use portals at various parts of the maze that will transport you from one portal to another. You can also ‘Bomb Jump’ which will take you back to the starting point again. This is most useful when pinned in by ghosts and you need a quick exit.
There are sleeping minions dotted about on some courses that will join behind each of the four ghosts, creating a ghost train. As you wake up more and more minions, the ghost trains get larger and become more difficult to evade. Fortunately, it is not instant death if you touch a ghost now, but touching them multiple times within a short amount of time will anger them and then they can kill you instantly. You can turn the tables by getting the power dot and chase down the ghost trains while they are weakened. The bigger the ghost train, the more points you can get and points mean everything in this game with a minimum of 3,500,000-4,000,000 just to get A Rank and don’t even get me started on S rank.
Even though there is no online play, there is an online leaderboard that you can upload your score to. You can then check your rank with others around the world or between your friends. Each level you play has it’s own high score and also it’s own leaderboard so if you can’t get the high score in one, there are plenty of others to get a high score on.
On the main title screen, there are two games you can play, Championship Edition 2 Plus or Championship Edition 2 Plus 2P. The former is a single player experience and the later for 2-Player co-op. Both offer tutorials and various modes to play. The first has Score Attack and Adventure, each with multiple missions that use different maze types to make them vary from one another. Championship Edition 2 Plus 2P has Solo Play and Pair Play. Pair Play is the co-op play with another player and Solo Play is co-op play with a CPU player. In either of these modes, you have to work together to gobble all the dots and squeeze the fruit and power dots into each other to progress to the next maze, There will be a ‘Boss’ battle with a giant ghost in which, you have to eat all the dots to get the power dot and then continuously bump into Boss to lower his life bar to defeat him.

There is very little to complain about as regards to controls. Button and movement inputs are very responsive and rely as much on your hand-to-eye coordination as you do on their response. Most levels begin with a fairly slow and manageable speed. As you progress, Pac-Man and the ghosts become faster and faster and this is where you come to realise that more often than not, it is our lack to instinctively react in time and make mistakes than it is for the controls to ‘fail.’

Pac-Man has stood the test of time and still manages to bring addictive fast-paced gameplay that will have you playing for hours and hours, with the mantra “Just one more go.” I have never been the greatest Pac-Man player but I have always found myself going back and trying every iteration I have had the opportunity to play. With the core mechanics at heart and the inclusion of new elements over the years, Pac-Man Championship Edition 2 Plus is certainly one of the best ways to play Pac-Man yet. You can customize the aesthetics to suit your preference and the inclusion of the Switch Exclusive mode Pac-Man Championship Edition 2 Plus 2P means you can share the fun with friends, at home, on the go, anywhere at anytime. It is certainly worth investing in as even the most casual Pac-Man players will find themselves coming back to it again and again.