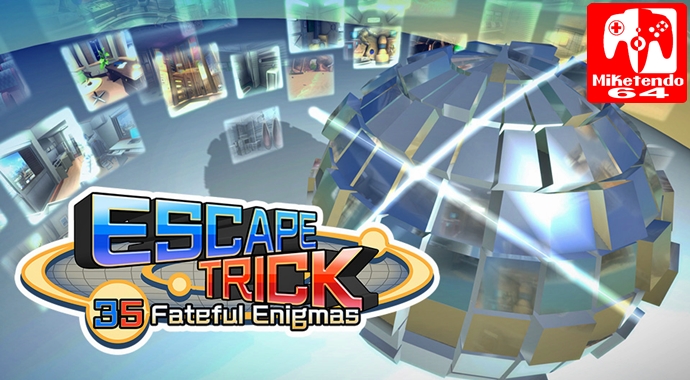 Escape Trick: 35 Fateful Enigmas is an escape room puzzle game. The odd name is derived from the total number of puzzles present, which are divided up between two different stories. The first story has 16 puzzles, and the second has 19.

For those unfamiliar with escape room puzzle games, they share a lot in common with the point and click adventure genre. You are often trapped in a room, and you must search around for tools, clues, and any other useful item or information that will help you get out of the room you are currently in. This is the first time I’ve played a game that isolated the entire game into escape room puzzles. Usually, this style of game is incorporated into visual novels or first-person point and click adventure games as a supplement to the rest of the game, rather than standing on its own. To turn what is generally considered filler material into a fully featured game, the developer D3 has woven a basic story that puts us in this world, and ties each successive room that we encounter into this narrative. To make this feasible, we are presented with various circumstances for which we are placed in these rooms, and have different goals that we are trying to achieve.

When playing the case of the Father Who Vanished, we are first put into a hotel. We learn from our character’s internal monologue that we are here to meet a gentleman that has information about our missing father, when all of a sudden we hear loud booms and shaking. We fall unconscious and wake up to find that we are now stuck in a hotel room, and it’s possibly in a burning building. We need to figure out a way out of this hotel! I won’t be spoiling what you actually have to find or which tasks need to be performed, but it is a great introduction to the game’s mechanics and narrative structure. For me, I found that the puzzles were quite similar to the Zero Escape series. If you have played those games, you will probably find a lot of similarities here for the puzzles. The story never gets that dark or wordy, though. While there is a narrative that ties everything together well enough (without making the idea of becoming “trapped” in 16 rooms too ludicrous), it can be ignored if you just want to play through the puzzles. The music is pleasant enough, but it’s not super catchy, and it gets very repetitive, very quickly. The sound design is solid, which is really a nice touch because of the satisfying sounds of locks unclicking and items thudding to the ground. It makes the static environments feel at least a little alive. The game still begins to grow very tedious if you play more than two or three rooms at a time, though. Keep that in mind, and you’ll have a more pleasant experience. I found that once I got to the third or fourth room, I’d actually just start dragging the onscreen cursor around any portion of the screen that was remotely questionable and power clicking the entire time just to try to catch where the missing piece of the puzzle was without having to look or think too hard.

While the gameplay between the Father Who Vanished’s collection of puzzles is quite similar to Waking Up Imprisoned, the former has a frustrating problem with the core game itself. It doesn’t do a very good job of explaining how to do. Anything, actually. Most of us already know that when we’re playing these types of games, we need to click around the screen to interact with or collect objects. That is true, here, as well. However, I ran into the embarrassing situation very early on where I became stuck not because the game was hard or I was overlooking something. No, I was stuck very early on because I needed to combine two items into one… which is another common feature of this genre. It ended up being that I had to equip the first item, and then long press it to get my inventory menu to give me access to the other items. Once that happened, it is very easy to combine things, as there is an indicator that highlights any and all items that can be combined with your first chosen object. Sometimes there are multiple combinations for the same item, each of which may provide a different outcome in your environment. This type of creative puzzle design is really where the game shines. The second collection of puzzles, Waking Up Imprisoned, actually has an NPC that acts as your mentor and partner. She gives you basic tutorial information through dialogue, and this dialogue also acts like a pseudo- hint book when you’ve tried the same thing multiple times.

Waking Up Imprisoned (The 19 Erased Memories from the in-game menu), plays out a bit more like a standard point and click adventure game, IMO, but has the advantage of confining each relevant item to the room (or the room and a small sub-room like a closet or bathroom), instead of spreading out dozens of possibly useful items that may or may not help you later on. The partner character. Kei, that also acts as a guide, makes the experience a little easier when working through the puzzles. However, this overall portion of the game is the more well-refined version of it. I’m glad that both games are packaged together, as they do tie together narratively, but even with “both games” included, the price tag seems a little high.

Escape Trick: 35 Fateful Enigmas is, overall, a fun experience. The puzzles are fairly well thought out, even if they are incredibly basic. The variations are really the highlight there, so it works in the game’s favor. While I did say before that the story can be ignored if you want to, it isn’t a bad story. It is very formulaic, and very safe. Which perfectly describes the game, overall.