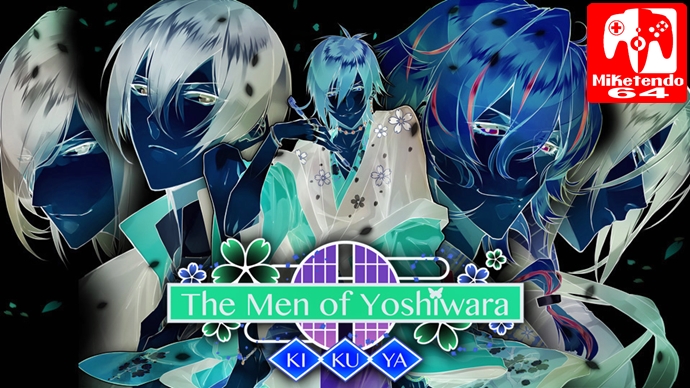 Looking to add some more men in your life? Yoshiwara has plenty.

The Men of Yoshiwara: Kikuya is an otome visual novel previously released on other systems, and focuses on a small island with an interesting history. For those unfamiliar, otome is a subgenre of romantic games that are targeted towards women, and generally, involve finding a male suitor for the female main character. I’ve never played any otome previously, so I can’t really weigh Men of Yoshiwara: Kikuya against other games in the subgenre. It is, however, not as cringe-worthy as I initially assumed that it would be.

The Men of Yoshiwara: Kikuya takes place on the island of Kikuya, an interesting location wherein very few boys are born. Those that are, become sold into slavery to the Yoshiwara house of courtesans in the red light district of town. Our story begins when we, the daughter of a local shipping agent, are tasked with delivering a package to the Yoshiwara. On the way there, we witness a parade in the streets, and a featured member of the festivities is Takao, the most popular courtesan of Yoshiwara. We briefly become enamoured by his performance, but then return to our task.

As we approach our destination, we run across a woman and her courtesan, who have snuck out of Yoshiwara to escape the island and live out their lives together. They are worried that you will sound an alarm, but you let them go, not wanting to stand in the way of what could be true love. Upon your arrival, you are introduced to the men of the house, one of which is the previously seen Takao.

There is Takao, the most popular courtesan, and unsurprisingly, the most confident and brash of our potential suitors. Kagura, the strong and silent type. Kagerou, aide to Kagura, is young and a bit rude. Tokiwa, the blond “foreigner”, aide to Takao, a demotion he received after being the fastest rising star in Yoshiwara. Iroha, the host of Yoshiwara, and not technically a courtesan any longer. Hayabusa, our childhood friend that disappeared long ago, who was secretly sold to Yoshiwara.

You are given your choice of a suitor at this point, and who you choose will be your courtesan for the remainder of the game. Others will still interact with you, and try to convince you to choose them instead (or shame you), but each story branch is only a few hours long, so doing multiple playthroughs is encouraged. This is also the game’s only replay value. Minor spoilers ahead. Takao is the most forward of the courtesans. This comes as no surprise considering his standing. Kagura wants to be appreciated for his swordsmanship, and is quite evenly paced. Kagerou is interesting because he is young like the protagonist, and their relationship feels more familiar and natural. Iroha tried to act disinterested, so I suppose he is the “playing hard to get” guy, but that’s not entirely accurate. Hayabusa offers a bit more of our history, so it may be a great first choice if you enjoy the backstory. Tokiwa, surprisingly, is the gentleman of the group. It’s also hilarious how his Western ancestry makes him the exotic one.

Whenever you play (read? interact with?) a visual novel, the story and characters have to be well written, and relatable. Otherwise, the rest of the experience falls flat. In some visual novels, they flesh out the gameplay with puzzles of some degree, but that isn’t the case here. In The Men of Yoshiwara: Kikuya, your only real gameplay interaction is the occasional dialog choice. What you say affects your likeability percentage, which is displayed on your save file. You can save and load at any time, and have a lot of save files to work with. This enables you to see the outcome of every dialogue choice and most of the suitor’s storylines in whichever manner you wish to. There are multiple endings for each character, but they are only dependent upon two choices in each chapter.

Most of the characters are introduced properly, but Tokiwa feels like an entirely different character in his own arch as opposed to how he is introduced and how he interacts with the others. Iroha has a “dark secret”, but it isn’t really a secret, but a deep character flaw. Our protagonist (surrogate) has no personality, but this is obviously a means of trying to make her one size fits all, it just feels that they should have tried harder to make us more interesting than just ignorant and virginal. None of the courtesans have much character development, which is very detrimental to the overall experience of the game. Another weird issue is that the translation is done so well about 90% of the time, and then there will just be a missing article, or the homonym of a word used in place of the proper word.

There are some moments of melodrama, and some interesting twists to be found throughout the playthroughs and your choices that influence them, but there is nothing fresh, or original here. The Men of Yoshiwara can be likened to a collection of romantic comedies where the heroine imagines how life would be if she had made this choice or that, but without a satisfactory conclusion where she learns something meaningful about her current life and the choices that she has made. The Men of Yoshiwara could have been helped by having a more competitive aspect to it, where you had multiple courtesans pursuing you at once, and you could make decisions that scored you more points with one, while taking away points from another. As is, though, it feels very much like what it is- a mediocre mobile game that has watered down it’s genre to the most fundamental version that it could be. At least it has been fleshed out by having so many different character choices.

Overall, The Men of Yoshiwara: Kikuya has an interesting premise, but not enough narrative structure or individually charming characters to make it stand out. People that are fans of Japanese culture, and especially those who love the magic surrounding the geisha, will probably enjoy playing through a story that is essentially a pursuit of a geisha, but with the genders reversed. I expected the game to be full of cringey moments, and there are some to be had, but it is still tame when compared to western romance novels. The Men of Yoshiwara: Kikuya is not a bad game, but it’s not a really good one, either. I don’t feel that it’s worth the price point that it has released at, but you might if you’re into otome and romance novels. 6/10