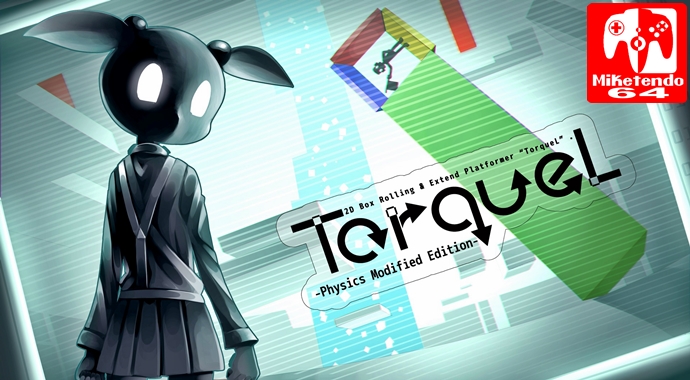 Although TorqueL has an interesting premise, its execution just doesn’t perform.

When it comes to platformers, not every game is for everyone; some games only appeal to a very small percentage of players and it seems TorqueL -Physics Modified Edition- keeps that tradition alive. TorqueL tries it’s best to be unique from other 2D puzzle platformer games, using its staple mechanic: movement. However, the one mechanic that makes TorqueL different is poorly executed and ends up making it more of a bore to play than fun, and leaves me with one question while playing it; why am I still here?

TorqueL’s main premise is simple and common enough for even the youngest child to understand; move your character from Point A, to Point B. The twist, however, isn’t the obstacles (while there are plenty), but more, the movement system. TorqueL places you inside a box, a box in which you can extend the four different sides of by pressing the corresponding face button on your controller. The idea and thought process behind this movement mechanic is simple enough and quite charming, but the way TorqueL executes it is emotionless and stale.

The box mechanic seems heavily unutilised for the 50 levels available in TorqueL, for a title that calls itself a ‘puzzle platformer’ I never found myself needing to think during a level; most levels become button mashing more than actual strategic play making dying more frustrating than motivating. Speaking of dying, the time between failing and restarting the level is frustratingly long. Instead of instantly putting you back to the start, it does a few seconds of unnecessary cut-scenes, this is definitely a problem, as you’ll be dying a lot due to the unfortunate wobbly controls.

Controlling your character in TorqueL is a nightmare, you could press a button hoping for a slight boost upwards and instead get caught on a wall and flung across the map. Although this could be user error; the controls always tend to feel flimsy and unreliable, which is a shame for a game that prides itself in speedruns and mastery. The main menu of the game has you on a screen, in control of your character, there’s a box on the left of you and a box on the right. The box on the left starts you on the last level you completed and the one on the right starts you from the beginning. This was a problem during my second playthrough, as I moved my character to the left, I hit the ledge and got thrown into the box on the right, and to my surprise, it started me at the beginning, without any warning messages or an ‘are you sure?’ pop-up. This is one of many examples of the downsides TorqueL’s wonky control scheme and design that had me constantly set my Switch down for a while to come back to it later.

There aren’t many level obstacles in TorqueL. Three to be exact, which is a shame, because the game could have had so many witty and interesting obstacles to add more depth into the game. The three main obstacles you’ll see in TorqueL are glowing red pools, which kill you upon touching them, rotating platforms, whether it’s circles, squares or entire floors, these will test your skill as you try to traverse them; and a blue ‘goo’, which when entered, makes you float upwards and reverses your controls, making for some interesting, thought-provoking gameplay. Although these three obstacles don’t do much to test the player after the first encounter, they’re scattered everywhere and gives TorqueL a much more menacing feel.

Sadly to the ear, TorqueL is nothing special, which is only made worse when the awesome concept the developer’s aimed for, failed to make its make. What could have been perceived as catchy and fun, came out as sad, boring and a little too repetitive due to there only seemingly being one or two tracks that play out throughout the entire game, provided you’re moving as this is the only time it could be heard. As for the awesome concept I mentioned, when you move backwards, the soundtrack plays in reverse and at first that was pretty sweet and it is a cool thing to see implemented, but it only remained interesting for so long, because any and all flavour it once had, soon dissipated due to the music you could hear being nothing more than a mediocre minute loop of generic electronic music.

TorqueL’s new subtitle, ‘-Physics Modified Edition-’ is deceiving. The new edition of the game has no new test chambers, puzzles or added content. All the Switch version differences are the slightly different physics that follow the update to the game engine, which provides the exact same experience as the original TorqueL. However, the Switch version does have the addition of HD Rumble, which allows you to feel the sides of the box stick out and hit the environment through your joy cons, which is a neat feature.

Unless you’re someone who is seriously into speed-running with strange mechanics and tricks that require massive amounts of time to master, I simply cannot recommend Torquel -Physics Modified Edition- at its current price point. The mess of poor level design, flimsy, unreliable controls and no new content really doesn’t do a lot to help it; and with plenty of other platformers coming soon as well as an entire library of them already released on the eShop, TorqueL is definitely a hit and miss.