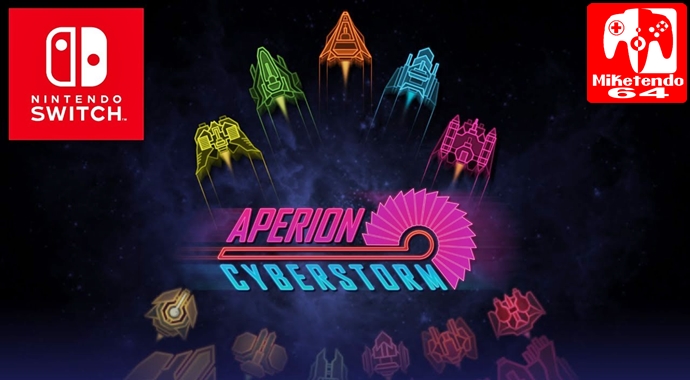 Gather up to five people to uncover a galactic conspiracy and blast your way through thousands of enemies in aPriori Digital’s Aperion Cyberstorm. This top-down, 360˚ shoot-em-up looks deceptively simple, but there is depth behind its basic 2D interface.

The plot to Aperion Cyberstorm, which covers the likes of conspiracies that affected the galaxy, is of little importance. Aperion Cyberstorm is all about the gameplay. You (and up to five players) take control of a neon coloured ship and fire out neon coloured bullets at countless enemies, each with their own unique attack patterns. You’ll pick up upgrades such as shields; dish out extra damage with two equip-able special attacks and dash through enemies. It’s all very shmup and played in a top-down perspective.

So far, so good, but is there anything more to the game than piloting a neon ship around and blasting enemies, I hear you ask? Yes, of course there is. The game features a somewhat Metroidvania-esque map, with several hidden secrets scattered throughout its 200 different areas. You are given full exploration rights and never have to play at any pace other than your own. There isn’t an awful lot to discover, but there are the odd hidden routes and a few hidden collectables to track down. Some of these collectables include new ships to pilot.

There are a good amount of ships to unlock, each one offering a slightly different play style. I personally preferred the ships which carried a double shot burst-gun, as this made taking multiple enemies out at once far easier (which is handy, particularly in the game’s latter stages, but more on that in a minute). Each ship comes equipped either with a single shot or dual shotgun, but a few send out their shots in bursts, rather than in a continuous stream. The real differences from ship to ship are in their movement speed, shot speed, health and special attack timer stats. Indeed, each ship looks and feels different enough that you may have a hard time picking your favourite.

You may have noticed that I’ve spoken a couple of times about special attacks. Throughout the game, you will unlock several different special attacks that will prove very useful. You have the likes of double shot, which doubles the amount of shots you fire, shield, which places a large shield around you and any allies for a few seconds and turrets, which you place down to watch as they shoot down enemies so you can keep your conscience clean that you didn’t down every enemy. My personal favourite special attacks were the double shot (giving me a nice spread of four shots when playing as a ship already loaded with two) and spiral shot, which fires off bullets in a (you guessed it) spiral around your ship. This pair was devastating and filled the screen with even more madness. No, alien menace, I am your master.

Each special attack comes with two stats, how long it lasts, and how long it takes to reload. Via the use of gems collected by blasting enemies down and shooting space crystals off the walls, you can upgrade them; increasing and reducing attack and reload time, respectively. There is a catch, however. Upon the successful clearing of one room, you are awarded experience points based on your performance, which takes into account damage and time taken. The levelling system is a nice touch and adds some more depth to the game. However, I wasn’t overly fond of the game’s pacing.

Aperion Cyberstorm is split into four worlds. Each world contains levels split into several areas (or rooms) that you must clear one at a time. The game may be designed to give the impression of exploration and other such Metroidvania tropes, but that’s all there is – impression. Exploration is limited and you’ll largely be heading from one room to the next in a strict, linear fashion. You enter a room and 8/10 it contains countless enemies to blast your way through. There is little in the way of variation aside from each world’s screen-filling boss-battle and the odd bit of defending a particular item. You blast, move on, blast some more and eventually end up at a save room where you can spend your hard-earned gems, refill your health and shield and even change your ship’s colour for a bit of a visual kick.

Playing the game in co-op increases the fun you’ll have, but the (mostly) strict linearity of Aperion Cyberstorm and rinse-repeat gameplay will still become tiresome towards the end of your roughly five hour stay in the campaign. At least it becomes more challenging during the latter stages, where you’ll have to use your head in order to best all the different enemy types that fly and shoot their way towards you. In the game’s final world, you have to face-off against almost-invisible squids, constantly regenerating poisonous balls of death which leave a long-lasting guff of poison that both slows you down and damages at the same time and quick ships that can avoid you all while shooting devastating laser beams right into your ships precious hull. Aperion Cyberstorm is at its best when bullets are flying everywhere and the techno soundtrack livens up alongside the action. Play the game with friends.

Once you’re done with the campaign, try out the Onslaught mode, which gives you simpler maps to navigate along with everything fully upgraded to play with. It’s a decent addition that fleshes out the experience well enough alongside the Versus mode. Everything here is playable either alone, or with up to five players, but Aperion Cyberstorm works best when played with as many as possible, dialling up the madness with each new player. I’d recommend playing multiplayer on the TV only however, as it can all get too much on the small handheld screen, undocked is perfect for singleplayer, however.

Aperion Cyberstorm is a good shmup that’s best played with as many people as possible. The story might be completely throwaway, but the gameplay is good fun throughout. I just wish the campaign weren’t so repetitive and more of the Metroidvania aspects it attempts were more fleshed out.