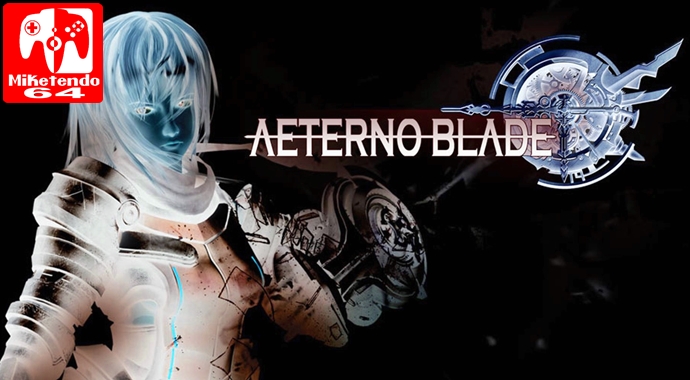 Time is but an illusion and for Freyja, it’s the means to claim the vengeance she desires.

Corecell Technology might not have developed Castlevania: Lords of Shadow – Mirror of Fate, as MercurySteam had that honour, but they did develop a similar game by the name of AeternoBlade. Having first launched on the 3DS in February of 2014, and with a second one in the works, AeternoBlade 1 (aka Time Avenger as it is known by in Japan,) is back and it’s out now on the Nintendo Switch, but does it feature new content? Well, having the chance to ask the developers does the game feature any new content, before we even got our review copy, the answer is “no.” AeternoBlade 1 is a simple port that took around 4 months to bring to fruition, so the broken physics that were present in the last instalment, are still kicking around, unfortunately.

Straight up port or not, there is a reason why it’s on Switch, it’s because the developers want to give players the chance to own both AeternoBalde games, when the second one eventually finishes development and comes to the Nintendo Switch. So, because the Switch release is something of an advertisement for AeternoBlade 2, how good an advert is AeternoBlade? That’s exactly what we’re going to find out and review in this review!

As a side-scrolling action platformer, Metroidvania, AeternoBlade is a game that tells the story of Freyja, a heroine who at the very beginning of AeternoBlade, dies during a battle against the dreaded Beladim, a darkened being born from hate, made immortal thanks to a special rod he wields with time altering abilities. Except for Freyja, death is not the end because suddenly the player is thrown backwards in time by 7 days, to the events that followed after the destruction of her village in the region of Awelsia. Unsurprisingly, Beladim is responsible for the destruction of Freyja’s village and this is where her desire for vengeance comes from, as her and another, are the sole survivors.

It is Freyja’s need for retribution that AeternoBlade focuses on, as gameplay consists of stages that take place across various landscapes, in which is the path that Freyja must take in order to reach Beladim’s Castle and take him down once and for all, only every now and then he will turn up to antagonise Freyja and send enemies and even bosses after her, with the latter being encountered near the end of each stage (save for stage 7 where Beladim is the villain.) Now, although does follow the usual Metroidvania conventions of tight and open corridors and passages to fight your way through, obstacles to overcome and even relics dotted all over the large maps. The relics in question, let you do things like alter time, create a warp point within any given zone and warp back to it, when you need to and there’s the typical double jump as well. Now, while the relic like items don’t give you powers that enhance the strength of the titular AeternoBlade that Freyja wields (a time bending sword,) there are actual relics that will help out in that aspect and upgradeable combat.

Borrowing elements from RPG games, AeternoBlade allows you to pick up actual relics randomly from enemies you’ve killed and secreted away on the levels, which can be upgraded with Power-Up Relics and allow you to have more health, deal more damage and even reduce the amount of Mana you use up, when reversing time. There’s also Yellow Orbs you get from defeated enemies and can be used to make you go from being a practitioner of the simple slice and dice, to a true combo aficionado of combat. The only downside to the awesome combos you can go on to acquire nearer to the end of the game, is how long it takes to get to the point to get those moves and if you don’t get the Memory Crystal, when you do reach Stage 7 and win the battle against Beladim, when you start the game all over again for your second playthrough of the game, which has some revised stages, all your stats and skills will not carry over. So, finding the Memory Crystal, is extremely important and something you’ll want to do before the final battle, otherwise you’ll find yourself having to do the same stuff again for another 8 hours.

Still, because it’s not all about combat and upgrading that which you have with what you’ve got, there’s also sections of the map, where the game takes control of the camera to show you what lies in store for you and you’re tasked with solving it, which originally starts off with you having to just reverse time to make a moving platform go up, while the platform you need to jump on, comes down so you can leap on it, but soon things get harder because not every object can be reversed via time and when you are reversing time, there are Guardians who will oppose you and do their best to assault you and whoever is currently surrounding you, i.e. monsters.

Should you wish to take a break from all the fighting, puzzle solving and exploring, there is a safe haven called the Eternal Room, which is where you can rest up, look at, but not talk to Vernia, unless she talks to you. (Vernia is a magical being who also hates Beladim because he destroyed her village.) The Eternal Room is also a place Freyja can upgrade her relics, her stats, her combos and sleep, but every time she does, she comes one day closer to her impending doom. Granted Freyja can do all of those things at Checkpoints, it’s only after she’s visited the Eternal Room for the first time, which is when you complete the first stage. It’s also the place you can use to access the Eternal Gate and select which stage you want to play next and where you want to begin from, as each checkpoint you access, not only fills your health and mana bar every time you save, but you can fast travel from each and every one of them.

To my own frustration though, although the combat is fluid and the story is a bit better than expected, AeternoBlade does feel like a game that the developers could have done more with and as for the graphics, while visually the game is similar to Castlevania: Lords of Shadow – Mirror of Fate for the 3DS, with its sequel supporting much better character models, visually and even soundtrack wise, AeternoBlade is a Switch game that does show its age and if you want more out of it than it gives already, such as its Arena mode, you’re going to have to part with even more of your cash as AeternoBlade does feature DLC but you’ve got to pay for it. Should you wish to know more about the DLC though, there is an Agent, Assassin, Time Guardian, Bikini, Ninja and Vernia costume that Freyja can wear, which can all be purchased separately for $0.99 each with the Arena Mode requiring $1.99 (just under $7 US dollars for the lot on top of a game that’s $14.99 to buy.) But, although the DLC is not a necessary purchase, they do actually give you something else to focus on your next playthough, so it is something you might want to consider picking up the next time around.

AeternoBlade might not as good as some of the earlier and more recent Castlevania games, as Castlevania-like games are never as good as the original, AeternoBlade is still a Metroidvania that comes with hours of content, big boss battles and an upgrade system that improves the game the more you put in. It is however flawed as it hasn’t aged as well as it could have been and instead of including all of the DLC from the get-go, or at least making Arena mode free, you have to pay for it, which does fell unnecessary, when the likes of Night in the Woods also released on Switch this month, and come with the DLC of charge. Nevertheless, I should point out though that AeternoBlade does have some good ideas at play and it will be interesting to see how they carry over to the sequel, which I am genuinely excited for, how about you? Should you wish to try before you buy though, there is a demo and it is out now in the eShop, so download it, play it and let the decision be yours.