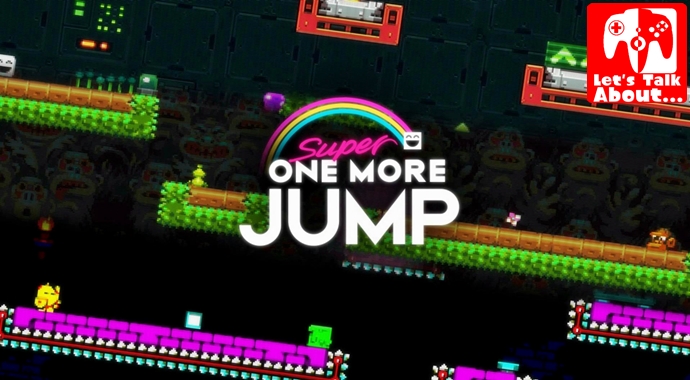 February 4, 2018 9:47 am Published by Ruairi O'Brien (Lucariocios) Leave your thoughts

At a glance, Super One More Jump looks like another lousy mobile port acting as easy shovelware on Switch; however, when looked further into, Super One More Jump proves itself to be a fun, single-button auto-runner for Switch, which is chock full of frustration, personality and gorgeous visuals.

With a substantial amount of levels, modifiers, game-modes and an interesting two-player mechanic, Super One More Jump gives players a ton of content for a game that costs a measly 5 dollars and is the ultimate cheap time-killer on Switch. At a distance, Super One More Jump’s platforming mechanics look simple and easy to use, the goal is to guide your sprite from one end of the level to the other, collecting gems and avoiding obstacles along the way; however, Super One More Jump is more than it seems. Even though these gems are a pretty simple collectable, it becomes addictive to play through levels multiple times to get all three before advancing. Some gems are a pain to get, but that’s all in SOMJ’s nature of being a frustrating auto-runner platformer. You cannot deny the addictiveness of SOMJ, as I really couldn’t let myself advance to the next level without collecting all three of the collectables. From start to finish, the main mode of SOMJ took me around 10 hours of play; which is saying a lot for a port of a mobile game that kept me pretty much hooked during that time.

Super One More Jump’s obstacles are where the game shows its true colours of pure evil. Multiple core obstacles are slowly given to you, moving objects, triggers, pause stations, reverse blocks; but as soon as you feel like you’ve gotten the hang of figuring them out, the game throws you into literal hell; with levels that might take you upwards of 50 times to get it figured out. Eventually, you start to get the feel of how high and how far your jumps take you, and you can get into a rhythm with the button presses; luckily SOMJ’s penalty for death isn’t much – you die, you get sent to the start of the level. Luckily, the game has a practice mode, that when switched on before entering a level, allows you to play through that level at a much slower pace and without crystals so that you can prepare for the full stage. This comes in handy at later stages, where winning the first try is frustratingly impossible.

Other than the main levels, SOMJ offers some really creative modifiers and game modes. If you manage to clear a level with all three gems, you can revisit with different modifiers to add more of a challenge; ‘Mirror’ reverses the level’s layout, destroying all your previously mustered muscle memory. ‘Night’ makes the entire level black, except the area around your sprite, making a spotlight; this modifier requires extremely fast reflexes and memory and ‘Rotation’ a modifier that rotates the stage as you’re playing, which makes it hard to judge jumps correctly and makes you somewhat dizzy. The other main game-modes that SOMJ has to offer are Endless, Circuit and the multiple coop game-modes. Endless is as expected, you jump through an endless, randomly generated level to see how far you can get, then you try again to beat your high-score. The Circuit is a box, when you complete one side of the box, that side swaps out for a randomly preset side, which results in one massive loop to see how far you can get. The co-op mode is an interesting concept, each platform is a specific colour and each player is assigned a colour, when the sprite is on a platform, only the person whose colours match can jump. You can play this game-mode with up to four people, which allows for some interesting and challenging gameplay.

Super One More Jump adds 10 new graphical styles to choose from, all of which was created by community pixel artists, these graphical styles can change the background, obstacles and sprites, all of which are unlocked using the gems collected during levels. Even though the graphical changes seem minor, it adds a certain charm to the game that can’t be neglected, the feeling that 10 separate artists had the chance to come together and contribute seems awesome, and all of the styles have their own little themes. These can range from a cartoon-style, Japanese-toy looking theme with cutesy animals and sushi as the characters to a haunted, fantasy theme where you play as rats, skulls and cats.

One of Super One More Jump’s major downsides is the soundtrack; the first time around, the upbeat electronic music seems really nice and relaxing, but after a while, it just feels plain irritating and repetitive. This makes players consider muting the game’s music and playing their own or just having no music whatsoever. The sound effects are great, however, the little boops and beeps the gems and jumps make are really satisfying, the sound that the end goal makes is unforgettable and really a treat to hear.

Super One More Jump has a lot of content for a mobile port, and for five dollars, there isn’t a reason not to buy it. It’s incredibly addicting yet frustrating gameplay and simplistic control scheme allows anyone to pick up and play. If you plan to buy this, be sure not to give this to anyone with a short temper or your Switch may end up in bits, but overall; I highly recommend Super One More Jump to any fan of 2D platformers or anyone looking to buy a time-killer game on Switch.