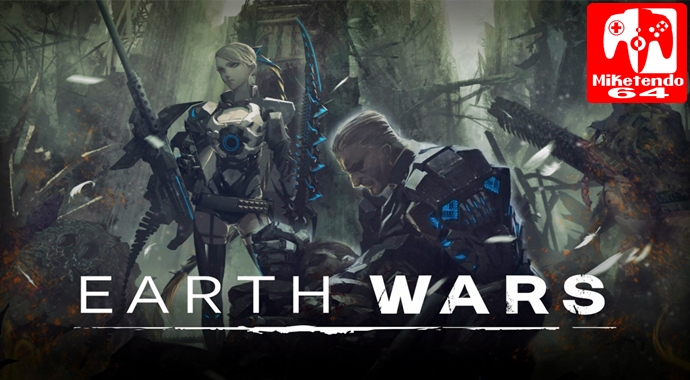 Developer: One or Eight

Publisher: One or Eight

Calling all soldiers! The war is raging and your time to act has come.

Earth Wars is a mission-based beat ‘em up with heavy RPG elements and a load of intensely fun gameplay. Developers One or Eight draw inspiration for its introductory Switch title from Vanillaware’s library of fine games, Treasure’s Gunstar Heroes series, and even a little bit of Starship Troopers. Released under the name “Earth’s Dawn” on Steam and PlayStation 4, the game has been well received by fans and critics alike, so does it translate over well to the Nintendo Switch?

We begin Earth Wars with a beautifully drawn cinematic laying out the invasion of Earth in 2020 by a group of previously unknown, strange organisms known as the E.B.E. These organisms are invulnerable to our conventional weapons, and their onslaught has sent humanity underground and in a flurry of research and experimentation in an effort to figure out a way of combating the horde. Little progress is made over the next 15 years, until a breakthrough is made where the scientists have discovered a way to fuse organic material from the E.B.E. to metal, and implant those fused plates into human soldier volunteers as a permanent exoskeleton armor. The scientists have also managed to create weapons that are imbued with the same which enables us to finally effectively damage the E.B.E.

The game begins with a trial run of this new technology where we take our customized A.N.T.I. soldier on a mission to defeat a baron class E.B.E. known as Kerberos. Upon the success of the mission, you are introduced to the respective scientists responsible for the experiments, and meet up with the commander of the A.N.T.I. troops, and its first successful recipient of the process. These introductions are just the start of further world building that will take place throughout the game as you are given snippets of lore in a volume unexpected in what is a budget indie title that gives Earth War a surprising level of depth that really makes it feel like it’s alive.

Earth Wars is full of fast-paced combat sequences broken up by short jogs of running through levels to get to the next fight scene. These shirt jogs give you the opportunity to cool down and regain your limited ammo and boost meters. While in combat, you have a number of commands at your disposal to dispatch your enemies, and upon defeating them they will drop different crafting materials, and eventually, health recovery items. You can attack with your sword or gun, and have the ability to double jump and boost while on the ground or airborne. Boosting is useful in moving quickly around the screen, and can help you achieve heights otherwise impossible to reach. You can also press down and B to slide behind your opponent’s back, which gives you a boost to damage.

It is sometimes necessary to shoot your opponents first to break their armor, but you have a limited supply of ammo with which to make these attacks. Thankfully, your gun shoots tracer rounds, so there is very little risk of wasting a shot. In addition, you can double jump, boost, and then begin firing at large or flying enemies to help slow your descent and maximize the damage that you can inflict upon them. Slashing with your sword only uses one button, but if done in succession will allow you to pull off combos that help you land critical hits and more effective blows by juggling your opponent and keeping them off guard. It is a deep and varied combat system that keeps the game fun and satisfying, despite only having two attack buttons to work with.

As I mentioned before, Earth Wars is a side scrolling beat em up RPG, and anyone familiar with Vanillaware’s library will feel right at home here. While not as heavy of an RPG as Dragon’s Crown, it does follow a mission-based system wherein at the end of every mission you return to a hub world that enables you to spend energy like cash and utilize E.B.E. materials to craft new or enhance existing weapons and armor. You unlock new weapons and armor throughout the course of the game, although it is advisable that you first focus your resources on maxing out stats on your starting weapons to become familiar with the crafting system. Each material gathered can bestow status effects and/or stat bonuses on your existing weapons to increase their effectiveness in battle.

You also unlock new skills to assign when you level up, and are given five skill slots in which to do so. I found that it was best to scroll through each slot and add multiples of the same skills and stat boosts, which made it feel as though I was gaining multiple levels at once, even though the stat boosts are incremental and it balances out. You are also given the option to specialize in one of five ways- offensive, defensive, tech, and ability limit. Each has their respective strengths and weaknesses associated with the stats that are vital to those classes. I preferred the balanced or defensive approach, but you can play to your own style, obviously, and you can switch between the styles at will between missions.

Quests: Whenever you complete a mission in Earth Wars, you return to the hub world where you can customize your stats, but you are also given a map to choose your locations from. Each location gives you a percentage completion rate, and a variety of missions to choose from. You are free to complete the missions in any order that you choose, and can replay missions as often as you’d like to assist you in collecting experience, energy and craft items for upgrades. Missions can be anything from eliminating all of the enemies, to collecting a certain amount of a specific crafting material, to rescuing a captured soldier.

One of the few cons that I have for the game is that sometimes you will return to the same section of the city you are in to complete different tasks, but it doesn’t detract much from the game at all. Every so often you will run across a wall that is impassable early on, but it gives you an incentive to come back to that earlier mission later on once you’ve powered your A.N.T.I. trooper up enough to break through. The other element that I feel is missing from the game is a co-op mode. It’d feel really nice to be able to hand your buddy a controller to help you take down some alien scum, or even have the ability to hop online to do raid modes with other A.N.T.I. troopers.

Earth Wars chooses to have paper craft like animations using hand-drawn art assets to illustrate its world, and this choice makes your attacks feel like they have a wait that they may not otherwise carry. The sound design is spot on. An epic action movie soundtrack plays during the cut-scenes, and while in a mission it plays at a more subdued level to let the sound effects shine through. The heads-up display can get a bit busy at times, and can become distracting while playing in handheld mode. While the health bar and ammo gauge are clear and suited to the game’s design, you also get indicator arrows, hints that scroll across the bottom of the screen, a reader board that tells you every craftable item that you get, and then there are the floating numbers that display damage dealt to enemies.

Thankfully none of this information dumping effects the game’s performance, as it runs smoothly throughout. One last nifty feature that I wanted to mention is an extra flourish the developer included, which is like a slow-motion kill cam. Occasionally, when you deliver the killing blow, the camera will zoom in on you and your victim and play the final animation as you slash them into oblivion, and then quickly pans back out to get back to the rest of the action.

Overall, Earth Wars is a very deep experience that’ll scratch the itch of everyone that loves to micromanage their character and enjoy some intense action in between. It’s by far the best value of any eShop exclusive game at this time, and I’d love to see a physical release, where it would still be worth the price for the amount of  content that’s provided.

*Review Key Provided by One or Eight