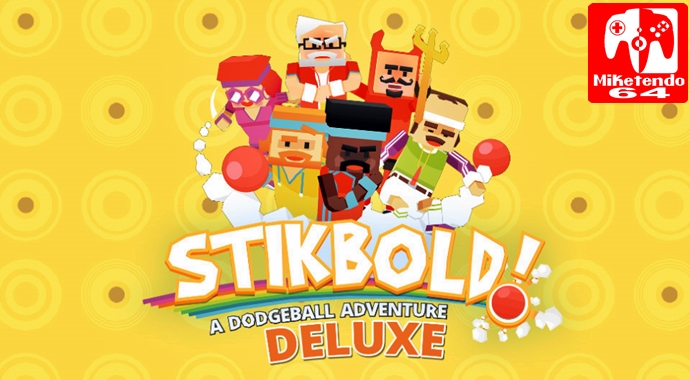 Regardless of who’s playing, Stikbold! A Dodgeball Adventure DELUXE for Nintendo Switch, combines witty comedy, fun local multiplayer, a short yet enjoyable single-player experience and a whole lot of fun into one small portable package.

Stikbold! on the Switch is the definitive way to play it, as having that easy to pull out, easy to set up local multiplayer system definitely works for this game, as that’s where most of the fun is to be had. The new Deluxe features include support for a hefty six local players and the added Mario Party-meets-70’s-Television styled game called ‘Wheel of Rumpus’ on top of the existing Campaign and PVP modes.Stikbold!’s gameplay is at heart, an isometric Dodgeball twin-stick shooter; however, beneath its simplistic roots and basic looking gameplay lies a whole lot of depth. There are multiple different types of objectives within the matches and also a very skill-based move system that takes time to master, whether that be throwing yourself into an incoming ball to catch it, or moving the right stick at the correct time to curve a shot, Stikbold! is a good example of a game that’s easy to pick up but hard to master.

Stikbold!’s single player/co-op campaign is very well crafted, the story is basic, an evil character (in this case ‘The Devil’) captures a female character and it’s up to the two protagonists (Bjórn and Jerome) to bring her back. Even though this storyline may seem cheesy and lazy, the game and characters are completely self-aware of it, which makes for some very humorous moments. The campaign takes you to all different places, from School to literally Hell, the environments and ambiance strangely work perfectly with the story. Each pair of levels in the campaign has its own music, visuals and gameplay twists, which helps keep the player engaged and not become bored over time.

Every level, it seems that some sort of new mechanic or obstacle is introduced, which really keeps the story mode fresh. At the end of each set of levels, there is a boss fight, and these boss fights are not only fun and new, but can also be quite difficult to beat the first time around. Most enemies have patterns or phases, which allow for some really careful strategy and teamwork. The main problem with the story, however, is the difficulty spike. At some levels, it becomes quite the challenge to pass, which is fine in retrospect as there is a difficulty setting, but it’s still quite unexpected nonetheless.

The Quick-Play mode of Stikbold! lets players fight each other and change up the rules, allowing for some wacky games to be made. It lets you change the map to any that you’ve previously experienced in the story, how you win, change basic gameplay elements like Friendly Fire and the amount of time you are stunned for as well as a ton of different harassment and level hazards. Changing these rules can allow for some of the best local multiplayer experiences on the Switch. I mean, who doesn’t want to play a 3v3 game of Dodgeball in a heaven made of honey, whilst trying to avoid Hot Dog stands and Sharks?

The new mode, exclusive to the new and improved ‘DELUXE’ version of Stikbold!, Wheel of Rumpus, is a game mode that allows players to experience a 70’s Television Quiz show with a traditional Mario Party twist. Up to four players can take turns spinning a large wheel, and wherever the ball lands on the wheel is the mini-game you’ll have to take part in. The mini-games all utilise the gameplay mechanics of Stikbold! while still having that twist of objectives; whether it’s running around with an inflatable beach ball attached to you while avoiding crabs or safeguarding precious crates on an oil rig while also smashing your opponents, the fun always gets wackier; after winning you get to choose from one of three cosmetic items for your character to wear. These mini-games can keep players fighting for the win for up to 9 turns (or approximately 40 minutes) of local or single player fun.

Stikbold!’s visuals and sound are really what makes this game stick out from the rest of the twin-stick shooters. Its art style is Voxel-like, with 3D pixel models (for sake of reference, it’s similar to Minecraft), however, its animations and backdrops are absolutely incredible and help tie the story’s charm and gameplay together perfectly. Stikbold’s soundtrack is really upbeat, it fits the ‘Denmark’ theme really well and all of the sound effects are similar to that of a cartoon. Claps, taps and drums really give each level a new feel, and it definitely makes it a pleasant game to hear.

Overall, Stikbold! A Dodgeball Adventure DELUXE, does an amazing job at turning a sometimes lifeless genre into something with its own unique personality. Its controls and gameplay are simple enough for the average child to pick up, but they require time and skill to perfect. It has a piece of everything for everyone, a funny yet challenging solo and co-op campaign, easily accessible and customisable player versus player matches and an extra Mario Party-esque game to boot, So, if you’re looking for another entertaining, charming, party indie game on Switch, you should definitely look into Stikbold.