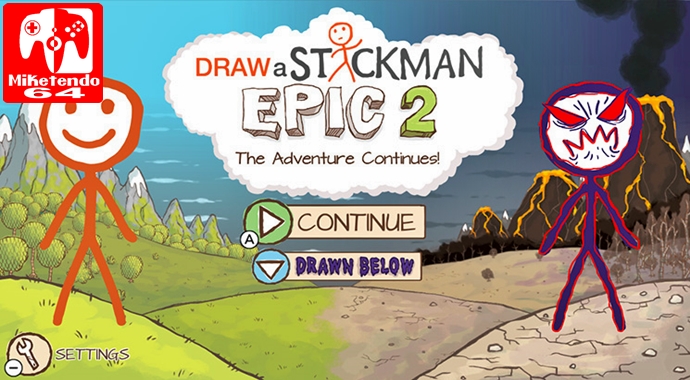 Who needs fantastically designed heroes when you can draw your own?

Developed and Published by Hitcents and initially released on the 30th of November, last year for various platforms, Draw a Stickman: EPIC 2 is Hitcents’ follow-up game to Draw a Stickman, but comes packed with more content than you think it would as Draw a Stickman: EPIC 2, just so happens to come packed with the Drawn Below DLC, but we can get to that later. Why? Because now is the time to talk about what kind of a game Draw a Stickman: EPIC 2 is? So, to put it bluntly, it’s a game all about your imagination, mostly. To play, first you are tasked to create and name two characters. The first one will go on to be the hero you play as and the other, is their friend. A friend who happens to fall off the sheet of paper both characters were sketched on, gets covered by ink and goes full blown evil!

In a bid to save your friend, you chase them into a book, which is where the adventure can truly begin and you can spend the game’s 8 Chapters making friends, battling monsters and pursuing the friend you drew. Now before we actually cover what you can and can’t do in-game, the biggest one to mention is the fact that if you despise the hero you drew for yourself, you will not be stuck with them. In Draw a Stickman: EPIC 2, you can actually create as many heroes and villains you want and items and you can change at any time. So if you ever tire of the Stickman character you created for yourself, you can always swap out to a Stick Shark or one of the character designs that’s been created by the developers of the game, which can be unlocked via completing certain acts. One act on Chapter 1 of Draw a Stickman: EPIC 2, requires you to use the Leaf pencil to draw leaves on all the trees in the level, to unlock the Tree Golem character, which looks like an awful lot like Marvel’s Guardians of the Galaxy’s Groot.

Being a game about your imagination and creation, with a setting straight up out of a Paper Mario game, Draw a Stickman: EPIC 2 is a game made up of paper worlds, repetitive yet cheerful music and a variety of challenges. Each level is designed in such a way that you will gain a new power on each on, but while most powers are new pencils with different powers, some are the means to create something new. Being able to draw may see you through to the end of some levels, but there are levels where drawing trees to attack enemies isn’t enough and levels where creating rain clouds to enlarge allies don’t cut it either. On these levels, you are given the ability to draw yourself a pick-axe for smashing certain rocks, make a sword for hacking ropes and enemies and even a key. Granted creating keys aren’t all that fun, you will do it quite a bit as a key will only open a look it is the same colour too.

Personally, I rather liked this step by step advancement, as it really allows you to get to know the ins and outs of what each power/item can be used for, before giving you another to come to terms with. It also helps that each pencil are fun to use, even if you are just drawing bird eggs in bird nests so as to watch them hatch and then give you a ride because you happen to be standing next to a feather. More fun than just doodling though, is seeing how the world of Draw a Stickman: EPIC 2 grows. Although each level is set in the same location pretty much, that location goes from being an inky wasteland full of monsters, to a town for you and your new friends to live in, until it gets destroyed because of a dragon-like beast and goblins.

Talking of beasties and goblins, Draw a Stickman: EPIC 2 comes packed with fun boss battles that are something of a treat to work out and collectable heart pieces, for when the battles become too much and you need more life. But if you’re expecting Draw a Stickman: EPIC 2 to be a one and done kind of game, then you’re sadly mistaken. Given the collectables such as colour buddies that upon collecting, allow you to draw things of a different colour, unlockable characters and puzzle pieces that can be collected, Draw a Stickman: EPIC 2 is the kind of game where you will need to backtrack, just to full complete the game and even when you get everything, there is still more content for you to wade through. As I said before, Draw a Stickman: EPIC 2 comes with the Drawn Below DLC, which means, just as soon as you are done with the main game, and have yet to hate the child-like charm that comes with it, another adventure awaits, which is really just more of the same, but totally worth experiencing.