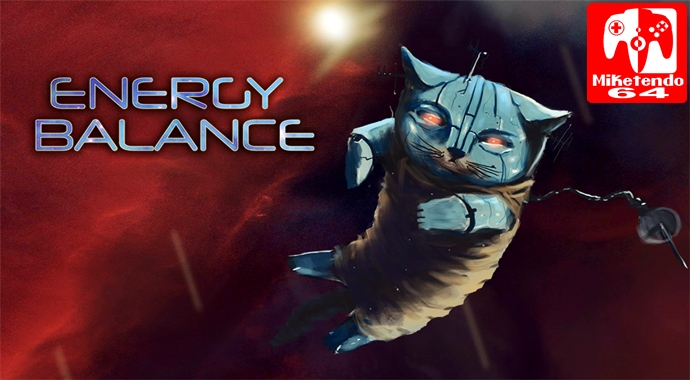 I hope you’ve not had your fill of the $2.99 Energy games b Sometimes You because now the first instalment is set to arrive on Nintendo Switch!

Much like the other games in the series, Energy Balance is a game of a different genre, with this one being even more puzzling than the others and easily the hardest one of the three, due to its focus on numbers. Instead of breaking bricks or trying to get cells the same colour, Energy Balance is a puzzle based game that can be described as being the love child of Sudoku and Crossword puzzles. Unlike the other Energy games though, Energy Balance does in fact come with a story.

A story that tells the tale that after a mission that’s been completed, your ship has encountered an anomaly of sorts that has rendered your ship useless and you now need to look “under the hood” and get it all working again. The story is told via dialogue in between the 12 levels that Puzzle mode has to offer, but upon completion of the mode, there is also a Hardcore mode, which is more of the same, but a lot harder and a Square mode, which is square shaped puzzles that are just as equally hard to solve as the ones from Hardcore mode. Still, just because there’s only 12 levels between you and the two harder modes that each have 4 insanely difficult levels, those 12 levels could very well push you to your limits as Energy Invasion is a game all about solving multiple sums, but it’s not as simple as it sounds.

The mathematical equations Energy Balance offers you, can come in varying sizes, but all pretty much require you to move cells around so that you can solve equations both vertically and horizontally, with the cells in the line being required to add up to, or subtract to the second number shown in the results, so if the result say 5/-1 then your job is to move cells around to make 5 become -1 and move the cells in such a way that all the equations all add up to their desired outcome.

Sadly, it is in this aspect of the game, which is the gameplay itself, where the game falls flat on its face. Puzzle games are meant to be logical and going by the puzzles presented and the randomness of them when you restart the level, but are given another puzzle to solve instead, there does not seem to be any logical way to solve them. So in the end, upon falling to work out each one, which can take up to an hour at least on the later levels, its actually in your best interest to actually just try and guess your way to victory, because unless you are an egghead genius with wicked math skills, Energy Balance will test you and it is one examination many will fail at. No amount of Sudoku and Crossword practice will save you, as they are puzzles that can be deducted logically, quite easily.

The only consolation to being stumped so much, is that the music that fills the soundtrack does have a space feel to it, which you can happily listen to and the touch-screen controls are rather responsive, so if using a controller and TV mode is not to your liking, than there are touch-screen controls available once again, but don’t go expecting to be able to pick up and play for 5 or 10 minutes and be done with a level or two, because Energy Balance just does not work that way, so thank God for sleep mode, because you can always come back to it later, as long as you didn’t close the software.

As far as the Switch offerings by Sometimes You go, Energy Balance is the worst one. It has the least content, the least amount of appeal and is just too hard of a game to even be appreciated by most of those who are willing to purchase this very cheap title. It’s also a game that does require you to have not just an understanding of mathematics, but an appreciation for it because, without it, Energy Balance is the homework you often put off doing and told your maths teacher that your dog ate it. Then again, if maths is your jam, maybe you do owe it yourself to give Energy Balance a go, but if not, you’re not missing out on anything special.