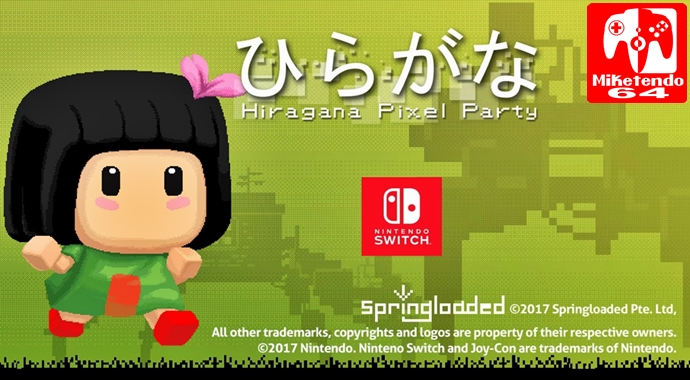 For most of us English-speaking gamers, learning Japanese is little more than a pipe dream. It takes years to understand all the intricacies of the language, and unless you plan on using it for a career or living in Japan, it’s probably hard to justify devoting so much time to it just so you can finally play that copy of Tokimeki Memorial 2 you paid way too much for on eBay. Still, even knowing just basic hiragana and katakana is very useful for gamers out there who like to play the occasional import game or JP eShop-exclusive demo. For example, if you were playing a Japanese game and saw two selections for “ストーリ モード” and “オプション”, you might have no clue what they mean. But by knowing katakana, you can sound those characters out to “Sutori Modo” and “Opushiyon” to figure out that they mean “Story Mode” and “Options”.

Which brings us to Hiragana Pixel Party, a side-scrolling rhythm game that aims to make learning hiragana and katakana fun. It does not teach you any actual words or explain some of the less obvious concepts of the language – its goal is solely to help you recognize Japanese characters and associate them with a sound, and it does that pretty darn well. The basic gameplay has your character walking across the screen as an unnamed girl shouts out Japanese sounds. You then press the button corresponding to the character for that sound to the beat to jump over boxes. For added difficulty, the game sometimes switches things up by making you match the English letter(s) to the Japanese character, or by flashing the text onscreen without playing a sound so you’re forced to memorize the sequence purely by sight. It’s simple, but it works… kind of. While you’ll certainly learn a thing or two by playing, the question is whether or not you’ll want to stick around long enough to do so.

Being a rhythm game, Hiragana Pixel Party really only needs to have good music to succeed. Unfortunately, the chiptune tracks tend to fall into two categories: average and forgettable, or loud and annoying. I don’t foresee anyone looking up these songs to listen to outside of the game, and they’re made even worse in-game thanks to the grating, robotic voice of the girl who pops up on screen every few seconds. “AH! EH! EE! OO!” Even the most enjoyable parts of the soundtrack are ruined by this flat-out awful noise that plays constantly. It doesn’t help that by virtue of being a teaching tool that requires repetition, you’ll hear the same annoying sounds over and over before you move on to new ones. The game attempts to start out simple with just the vowel sounds and add complexity as it goes along, but it takes 12 missions to get past this incredibly slow start, and by the time I reached “ka” and “ki” I just did not want to play any more. At least there’s plenty of game here for those who enjoy it, with a whopping 384 missions split equally between hiragana and katakana (although there are only 15 or so songs to be heard throughout all of them).

And the graphics look nice, with each level having a striking color palette and unique background that mixes natural, organic themes with more futuristic concepts like robots and skyscrapers. It’s tough to have to give a game like this a mediocre score, because it’s a really cool concept and I could easily see it being amazing with just a few small tweaks like better voice samples and more varied music. As it stands, I can only recommend Hiragana Pixel Party as a good study tool, not as a good rhythm game. You can decide for yourself whether the music is to your liking with this link:

Hiragana Pixel Party is a great way to learn entry-level Japanese, but the weak soundtrack and irritating voice samples put me off long before I could reach any lessons of substance. So it’s a good thing I already know kana!