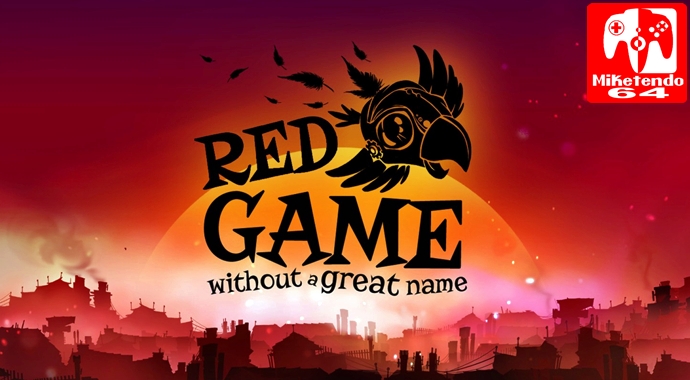 Why be green, when you can be red?

On the 17th of November, iFun4all brought the 2D Steampunk like Green Game: TimeSwapper to the Nintendo Switch and then one week later, they brought its prequel to the European eShop and although it’s not out in North America just yet, now is as good as any time as any to answer the question “is it worth getting?”

Well, whether or not you did pick up Green Game: TimeSwapper, Red Game Without a Great Name, is a game that is very much so a lot like its successor as both are 2D side-scrolling platformers of sorts that were previously designed for mobile devices and given a home console release on Nintendo Switch. Only why Green Game is a game with a green theme all throughout, Red Game is a game with a red theme all throughout, although sometimes that red background can appear to be a red-ish shade of pink, purple and even orange. Different colours aside though, the two games are essentially the same thing.

Both can only be played in handheld mode as touch-screen controls are the only way to play, but unlike Green Game: TimeSwapper, Red Game Without a Great Name actually has more levels to play as it has 60 instead of 50 like Green Game has, which also means it has a grand total of 180 gears to collect as there is 3 per level, as opposed to the 150 available on Green Game. The music however, is just as funky as its sequel, with the same graphics at play.

The story however, is where things actually are different, as with Red Game Without a Great Name being the first in the series, it means now we actually get to play as the mechanical bird, manufactured to deliver mail in harsh environments, before it successfully made it to the other side and descended into a green world, where a new power was bestowed upon it. So because the time manipulation power is something that comes later, in Red Game, the only power the bird possesses is teleportation, which is just as good a power, as it does mean gameplay is somewhat different to what you can see and do in Green Game.

If you break it down though, at the end of the day, you’re still just trying to get a bird from one side of the screen to the other, whilst swiping your finger across a screen, except now instead of swiping to shift between past, present and future, you’re swiping to teleport the bird to safety, or just the next area. Whatever you do though, do not teleport it into the barbed wire, or the nasty looking spikes as that is grounds for immediate death and dying means having to redo the level from the beginning and collecting the gears once again if you’re a perfectionist.

Regardless of Red Game being more of the same though as its successor, the same can be said about most games, so don’t rule it out just yet and because there are many hazardous objects, there are also three discoverable power-ups with one granting temporary invincibility and another that allows you to smash breakable walls into smithereens, but there really isn’t that much more to Red Game Without a Great Name than that, as it is a game of very little substance, which is something that can only hurt its overall appeal. Sure it’s great to have a low maintenance game you can put some time into when you’re trying to kill time, but there are plenty of menial games that actually have appeal, so unless you’re actually into games like Red Game Without a Great Name and what it and its sequel offers, the fact is it is nothing truly special and no one will actually blame you if you pass on them, even if they are just $2.99 each.

Unlike the game that came after it, I actually find Red Game Without a Great Name to be more engaging. There’s more finger play, there are more levels for what you buy at $2.99 and it feels like a darker version due to its “red you’re dead” colour scheme. So, it is a decent mobile game ported to the Nintendo Switch, but by no means is it the best one, as the likes of Oceanhorn: Monster of Uncharted Seas is playable on Switch and has a whole lot more going on than just navigating a manufactured bird through a series of levels where danger and various perils await.