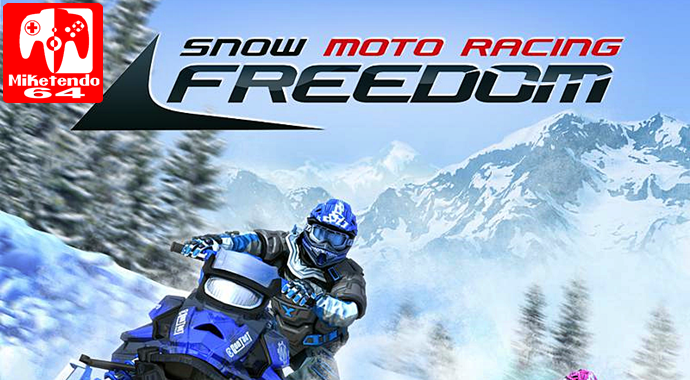 Prior to the publishing of my Aqua Moto Racing Utopia review, it was decided by the powers that be, because I was going to review one, I may as well review them both and I can honestly say, while the two do mirror each other in almost every way, there is no comparison between the two, Aqua Moto Racing Utopia is the better game of the two, with a nicer presentation, but because this is a proper review, we will of course cover Snow Moto Racing Freedom in proper detail.

So, Snow Moto Racing Freedom, instead of focusing on watercraft like Aqua Moto Racing Utopia does, watercraft are replaced by snowmobiles and scenery like the Mediterranean coast and the Amazon have been replaced by the likes of the Alps and the Rocky Mountains, but other than that, the two games are pretty much the same thing, with one being significantly better. For starters, while both games allow you to create your own profile and character, unlike in Aqua Moto Racing Utopia where you can create your perfect rider, down to the last details, Snow Moto Racing Freedom lets you choose a sex and your desired colours and that’s it. As for the handling, it’s way worse.

Due to the nature of how snowmobiles are designed and work, they can be more cumbersome than a Personal Watercraft and because Zordix have gone for the “like the real thing approach,” which includes handling, unless you know what you’re doing and how to handle them, you can be slip sliding all over the place and losing every race you play. The good news though, is that as long as you are willing to play and invest the required time into Snow Moto Racing Freedom for the learning curve to come to fruition, it will and you will be racing like a Pro in no time.

Talking off Pros, like with its Jet-ski game equivalent, Snow Moto Racing Freedom has a Championship mode of its own as a main campaign, which is made up of three divisions (Sprint, Snocross and Freedom League,) except in Snow Moto Racing Freedom, all divisions and tournaments are locked except for the very first tournament that’s part of the Sprint division, as the rest are all locked until you have proven yourself worthy of victory and ranked up enough, not just to get more snowmobiles to ride, but to actually be allowed to partake in the harder events. Although like with Aqua Moto Racing Utopia, while the AI can be troublesome, Snow Moto Racing Freedom does want you to win, so even if you lose a race, before moving on to the next one, you are given the option to restart the current race and try again and again and again, until you get the result that you want.

Also unlike Aqua Moto Racing Utopia, Snow Moto Racing Freedom does away with a currency system and instead just lets you use any snowmobile you are of level to use 12 snowmobiles in all), so once you’ve unlocked them, they’re immediately yours as opposed to unlocking them and then buying them. Another thing you could say Snow Moto Racing Freedom does right though, is its stunt system. While it too features a huge array of stunts (22) that can be performed on any of the game’s available 40+ tracks (even when doing Time Trials,) there is actually less importance on showboating. Yes, stunts can earn you points and be fun to do, but there is no forcing of stunts upon you, so if you want to do them, you can, but you do it because you want to, not because you’re doing Freestyle and need to earn as much points as you can.

As for something else the two games do share, is their handling. I know I touched a little on this before, but they do handle the same way (mostly) and make use of the same controls, so ZR is used to accelerate, ZL is for manoeuvring tighter and quicker turns, B is for boost and the analog sticks are for steering/rotating when in the air (left stick) and performing various stunts (right stick.) Something I will say though about Snow Moto Racing Freedom, is although the graphics do come across as lacking, with an all too white theme going on (I know it’s a game about snow, but a little bit of colour wouldn’t hurt,) the split-screen multiplayer modes are the best way to play. Not only do you actually stand a better chance of winning by playing against your friends, but the game feels a little more forgiving this way and tolerable, so while that might not completely redeem the game in my eyes, there are many out there who might just find Snow Moto Racing Freedom being the very game they’re looking to add to their Switch library next. Just bear in mind though that while both the Sprint and Snocross events are both races, one is a race that requires you to go through checkpoint gates with no visible track to lead you to them, other than a map in the bottom left hand corner of the screen, whereas Snocross is racing without checkpoints, they are not without their own couple of issues and require nothing from you, except your absolute best.