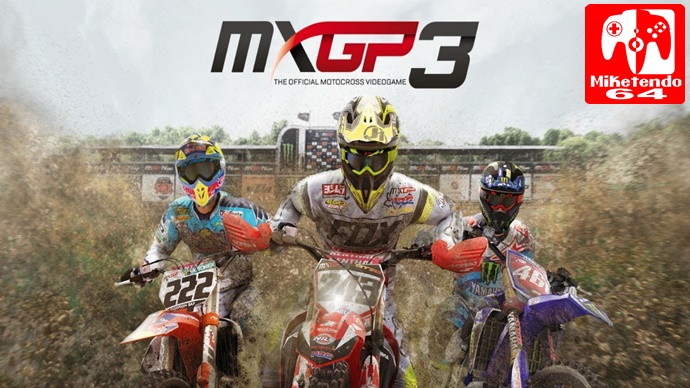 Get ready for an adrenaline-fuelled motocross racing experience, it is MXGP 3 on Nintendo Switch! Well that is what I would like to say but the truth is far from that but before I dive into the nitty gritty, let’s first talk about its history.

MXGP3 is the official racing game for the Motorcross Grand Prix, sponsored by top brands like Kawasaki, Honda, Yamaha, Fox, Alpine Stars and Monster. The MXGP Championship plays host to the top MX racers around the world and takes place over many tracks across the globe including the UK, USA, Argentina, Spain, Switzerland, Qatar and Latvia.

MXGP3 on Switch is a single player racer that pits you against 10 other riders (The other versions of this game has 22 competitors in total). You then have to do your damnedest to overtake your rivals through sharp bends on unforgiving terrain as you all try to pit for first place. Prepare to get your butt handed to you for quite a while as there is a seriously difficult learning curve that has to be mastered. The AI in this game have some pretty good reflexes and will beat you around almost every corner if you start showing even the slightest bit of reservation.

The Switch Version does not come with a multiplayer option, neither online or local as you may have picked up on when I said ‘single player racer’ which is a great shame because racing games are much more fun when you can play it with somebody else. Other versions of the game do have online multiplayer but it seems to be sorely lacking on the Switch. Whether this is to do with optimization or lack of confidence in the Switch’s hardware shouldn’t really be the case as many companies have proved that the Switch is quite a formidable machine that is quite capable of rendering complex graphics with only a slight drop in frame rate. Look at Fast RMX for example, that has a hell of a lot more racers on the track and still runs superbly at 60 FPS.

Anyhow, There are a few different modes you can play which are Career, Grand Prix, Championship, Time Attack, Compound and Monster Energy FIM MXoN. Though most of these modes offer basically the same thing as it all revolves around racing around a track, Career mode is like the story mode of the game and has you work your way through the Grand Prix whilst trying to gain Sponsors. by getting better sponsors, you can earn more money and fame which you can use to buy better gear or pursue even better sponsors. Championship mode has you compete through all the courses available in sequence and Grand Prix allows you to choose single tracks to play on. Compound mode is a training track for you to practice on and get to grips with the general controls.

If you like customization, well you are in luck as you can create and name your own character and then, you suit them up with well over 300 different types of apparel. You can choose between boots, jacket, mask, helmet and shoulder pads of 18 or so different brands from 6D to UFO Planet. There are also 14 four-stroke and 10 two-stroke you can acquire from manufacturers like Kawasaki, KTM and Honda.

The Graphical representation of the game is ok but it could be a lot better. The background is blurry as hell and sometimes you can’t make out what is in front of you until it is too late and this is without interference of the game’s weather mechanics. There have been a few instances where the outline of your competitors are blurred and it can actually strain your eyes to look at them, this normally happens when all competitors are close together and could be the Switch’s incapacity to render all instances at once. I don’t think this is the case as many games have been optimized to work on the Switch and normally have frame rate drops to compensate, not blurring the lines of every instance in front of you. There have also been a few other graphical cutbacks like the ground looking less realistic and that tyre tracks have been removed from the Switch version and the rain just looks awful.

The gameplay also takes a hit as some controls, though trying to mimic real life actions, seems to be counter-intuitive in a videogame. At the beginning of the race, you have to hold the clutch button (ZL) and the Accelerator (ZR) whilst tilting the right control stick forward to put the rider’s weight over the front wheel. You then have to release the clutch as soon as the gate drops in order to drive your motorbike forward. This is the only time you will need to press this button and seeing as the game changes gear for the bike automatically, it makes little sense to even have a ‘clutch’ button. Turning the bike around corners is the biggest challenge of the game and trying to get your rider to take the corner properly without losing your position in the race is like trying to go up a steep hill in rollerblades.

Unlike most games where your finger or thumb is constantly pressed on the accelerator button, MXGP3 opts for a more realistic approach and has you regulate the accelerator instead. This does make sense in a racing game as you have to slow the bike down before going round corners and then pick up pace upon coming out. The game’s worst enemy is its own steering. You will have a devil’s job trying to take a bend and then you can do a full 90 degrees whilst on a straight. You do have control on camera modes by opting between 3rd and 1st person perspective. I personally find the 1st person perspective works better and seems to be a bit more receptive control wise.

As regards to difficulty, there are no settings to alter in order to make it easier, there is only one setting that is reminiscent of the NES era, Hard. Don’t expect an easy ride, or for the fellow racers to take it easy on you in the initial races. They are experts from the get-go and if you can’t keep up, don’t expect them to slow down for you to catch them up. Those behind you will also not stay behind you for too long, so be sure not to let your guard down, not even for a second.

There are some positives though, if things aren’t going your way and all of a sudden you crash into a bank or fuff a landing, you can rewind back about 20-30 seconds and take another go at it. You can also pause the screen and take a screenshot much like in Super Mario Odyssey with the likes of rotating the screen, changing the filters, etc. Sadly though it doesn’t really seem to be enough to balance out all the negatives that can be found in MXGP3.

When I first heard of this game, I was interested and thought this would be another great title for the Switch. I must admit, I am a little disillusioned and expected more than what was presented to me. There is a very difficult learning curve that really tests your gaming skills, coupled with the stiff steering controls and AI opponents that will disappear into the distance before you have even left the starting position. A simple multiplayer mode may have helped the MXGP3 somewhat but the pure lack of it means you won’t be playing this with your friends anytime soon and even though there are 18 different tracks to race on, after a while, they all look the same and repetition in a videogame is never a good thing. I know I am probably being a bit too critical but there are issues that need to be resolved like maybe incorporating a multiplayer mode if only for two players. If you thought this was going to be Excite Bike 64 on the Switch, you are probably better breaking your copy out and playing it on the Nintendo 64.