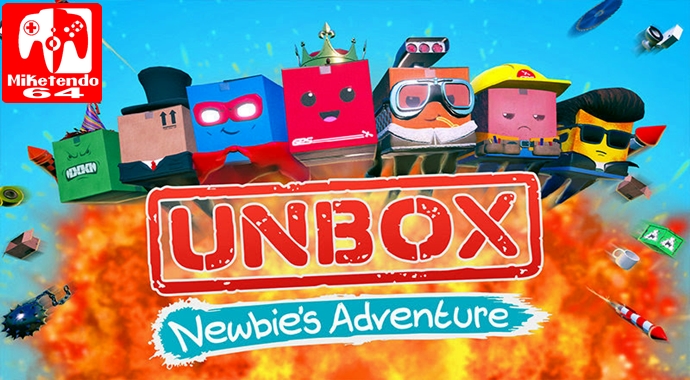 The 90’s may be over, but that fantastic era where true gamers were made and even greater games followed, still continues to affect some of the games made today and one such game is Unbox: Newbie’s Adventure.

Developed by Prospect Games and originally released in 2016 on the likes of PlayStation 4, Xbox One and Steam, Unbox: Newbie’s Adventure was hailed as being the most perilous platformer of 2016, Unbox is back and the reception is a little more mixed this time around. Last year Unbox was a fresh take on the platformer genre that housed plenty of Super Mario 64 and Banjo-Kazooie traits, which includes scale and sense of humour, but now a year later it seems the appeal of Unbox is almost gone entirely.

For those who never played it before and have yet to play Playtonic Game’s Yooka-Laylee, Unbox is pretty cool,  but to everyone else, it seems the game about a box destined to save the Global Postal Service (GPS,) has been left out in the rain because it’s cardboard box protagonist has lost his edge. No longer does the appeal of a game about a cardboard box feel as enticing as it once did, which in my opinion is a shame. In a lot of ways, Unbox: Newbie’s Adventure is a lot like Sumo Digital’s Snake Pass, which was the first indie game I ever gave a 10 (only other Indie game I gave such a lofty score to was SteamWorld Dig 2.) Both games are platformers with a difference, as their main protagonist has a particular way of moving about them, such as Snake Pass’ hero being Noodle the snake, who must slither and wrap around bamboo structures, and Unbox’ Newbie who is a cardboard box and does this really weird roll for him.

Suffice to say, neither character is easy to control as it takes some getting used to, but whereas Unbox: Newbie’s Adventure received minor criticism about its control system last year, it seems for Switch that this is one of the most game breaking things about it. I’m sorry but Unbox is a game about a cardboard box, how can you possibly expect it to have perfect controls? A box does not have legs, it can not walk or slither, instead it can only roll and jump and because it’s square-shaped it can’t quite roll like a ball now can it? Of course the controls are wonky and a tad over the place, it’s precisely the point. It’s like asking someone who has broken their leg why they are walking differently?

The controls are not to be designed to be easy and like anything we have played before because they are supposed to be different and challenging, so unless you’re willing to do things a little differently, than maybe Unbox isn’t a good game for you to play, but the controls work exactly like they were meant to, as for the graphics however, that’s something I can’t defend. While Unbox looks great at first at a distance, things soon change when you get more up close as the once vibrant world soon looks a lot less detailed when playing in TV mode, whereas Handheld mode has them all looking more crisper, but still a bit underwhelming. But then saying that, it’s only underwhelming as far as AAA games go and Unbox: Newbie’s Adventure is not an AAA game.

It is an indie made game, so while its graphics may not be entirely perfect and make the most of the Nintendo Switch’s capabilities, at the end of the day it is an indie made game with an indie budget and a small team behind it. It’s also one of the few indie games on Switch that doesn’t utilise an uber retro 8/16-bit look, as it tries to be modern, so hate the graphics if you must because they’re not current gen like some would want it to be, but it they are far better than expected and not overly buggy.

As for the actual game, the titular Newbie is a superior and highly intelligent cardboard box protagonist that is created by the GPS in a bid to save international posting as the GPS is in trouble and with parcels going missing left, right and centre, it won’t be long before the organisation goes bust. As for the why parcels going missing, well that’s down to the Wild Cards who are led by Boss Wild. The Wild Cards are not friendly and attack all those they come into contact with and imprison them in cages. As for the Wild Cards mission, it’s to essentially replace GPS altogether with a GPS of their own, only it is named Greaser Postal Service.

I’ll be honest, the story to this physics orientated platformer, is not all that as the premise of it all is a bit eh, but as a game about cardboard boxes, there’s not much that can be done with it story-wise so I just rolled with it as the writing may suck as far as the story goes, the dialogue between characters is golden and worth sticking around for. What isn’t worth sticking around for is saving Zippies that have been captured by the Wild Cards, as most promise to give you helpful tips, only to then have the tips turn out to be nothing more than vague references at best. Still just because that particular part about the game sucks worse than the writing, the worlds of Unbox: Newbie’s Adventure are worth thoroughly exploring as each has 18 Stamps to be found on each world except the hub world (GPS Headquarters,) trapped Zippies and 200 Pieces of Gold Tape that can be found on all of the game’s 4 worlds. There’s also some really cool customisations that can be acquired and used to modify your very own Newbie however you wish and to get some of them, you will need to collect certain collectables previously mentioned, which can be done via completing challenges of various natures.

Now, while the worlds of Unbox may seem vast at first, it only takes a few laps around each location to get your bearings and adjust to the terrain, and if you do wish to use the use of vehicles to speed up your journey you can, but just know the steering is absolutely abysmal, but Newbie does make up for that fact by being able to jump 7 times, thanks to his unboxing ability, which when triggered, after a normal jump, can cause him to shed a box and keep on shedding until he runs out of them, and being lifted up even higher, every time he does so and as for replenishing himself, that can be done by reaching a mailbox checkpoint or by collecting the life crates, which are the little green boxes that spin round. (Note to reader, if the crate is green and still, it is nitro and it goes BANG when you come into contact with it, whereas the red crates are TNT and blow up after 3 seconds.)

However, just in case the main campaign isn’t content packed enough, Unbox: Newbie’s Adventure does have more content that I have yet to discuss and it concerns a multiplayer mode! With support for up to 4 players, Unbox has 5 games for players to try their hands at as part of Free Play, and those games are Collect, Boxing, Oddbox, Thief and Delivery. In Collect the goal is to collect as much Gold Tape as you can in the given time limit. In Boxing points are earned by shooting other players with various fireworks, whereas points are lost by falling into the water. In Oddbox, which is my favourite, the goal is to become the “oddest glowing box in the world” by collecting the Oddbox and earning points for every second you are able to hold onto it before the other player/players take it from you.

As for the other two games, Thief is a lot like Boxing, only instead of earning points by shooting someone with a firework, now when they get hit, they or you will drop an assortment of coins and the player who is able to collect the most in the time limit and as for the final game Delivery, well that’s a straight up race in which players are encouraged to roll, jump and Unbox their way to the finish line and remember that there are no rules, so if you want to blast your best friend with a horrible explosive, than go for it!

The multiplayer may not be the most diverse in this world, but it’s more fun than the main campaign and it has a whole array of levels to play on so while it may not feel like a key feature in its own right, it’s a welcome addition nonetheless that has plenty of good ideas, even if not all of them are properly executed, like a lot of the other ideas seen and encountered in the game.

The biggest issue that Unbox: Newbie’s Adventure has though, is its price. Sure some would say the big issue is its last gen design, or terrible controls, but the price is the worst. Due to the nature of the game and its design, while it is something that can be thoroughly enjoyed by the few, for everyone else, Unbox is way too overpriced for a digital title.  But the thing you’ve got to release about Unbox is that while it is only available as a digital title right now, a physical release is in the works and the price for the digital version is said to be same as the one for the physical release, but that really doesn’t make it any better in the slightest. But if you are looking for a game like Yooka-Laylee that is nowhere near as large as Super Mario Odyssey and play it with a friend, than Unbox: Newbie’s Adventure is available as an option, but you’d be better off getting Mario.