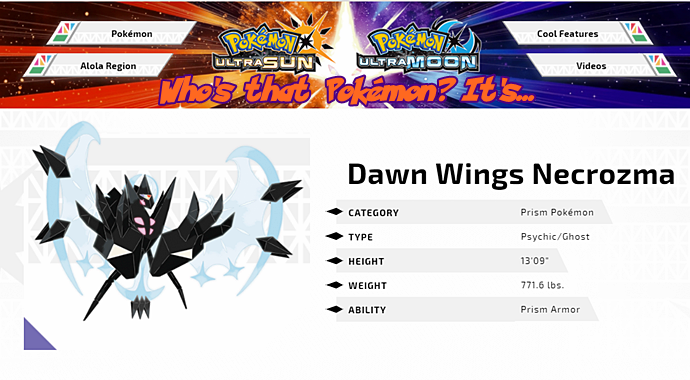 If you haven’t boarded the Pokémon Ultra Sun and Pokémon Ultra Moon, hype train just yet, now might be the time to do and because we have already, it’s time for another edition of Who’s That Pokémon? Coming under the spotlight this time, we’re paying close attention to Dawn Wings Necrozma!

Dawn Wings Necrozma controls both the body and mind of the Legendary Pokémon Lunala, taking Lunala’s light energy into itself by force.

This Necrozma shoots energy that glows darkly from the black portions of its wings. It accelerates by the shooting black light from its back, getting right up close to enemies in a furious rush. The power far exceeds that of Lunala.

By taking Lunala into itself, Necrozma’s Sp. Atk stat gets even higher. It’s well suited to battles that use special moves, including Moongeist Beam

Photon Geyser is a Psychic-type special move that only Necrozma can learn. This attack engulfs the target in a pillar of light.

Necrozma can learn this move when it’s in its Dusk Mane or Dawn Wings forms, as well. This move compares the user’s Attack and Sp. Atk stats, and it deals damage according to whichever is higher. This means that both Dusk Mane Necrozma, with its extremely high Attack, and Dawn Wings Necrozma, with its extremely high Sp. Atk, can unleash the effects of this powerful move to the fullest.