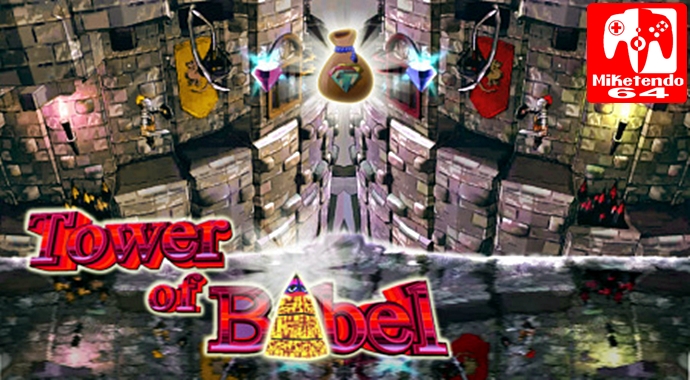 The Tower of Babel is a well-known Bible story in which humanity united to build a tower to reach Heaven. The game Tower of Babel for the Nintendo Switch has absolutely nothing to do with that. Instead, it follows a knight on a quest to restore light and life to the world. To do this, he must run up towers inexplicably filled with traps and collect floating gems to offer as tributes at the top.

The game is an auto-runner, a genre that has become so saturated that even Nintendo has created its own take with Super Mario Run. Your playable knight automatically runs up a spiral tower, and your primary goal is to jump over and slide under any obstacles along the way. You must also collect a certain quota of gems that are scattered about. It’s painful to reach the top of a hard tower and get a Game Over because you were a gem or two short. After the ascension, the tower crumbles and you must run back down within the time limit.

The towers come in three types, which serve to spice up the gameplay. The first type of tower only has one path to the top and represents your standard 2D sidescrolling auto-runner. The second tower adds another lane that you can run on, giving it a quasi-3D feel. The third type adds yet another track, but more notably changes the perspective to full 3D, emulating games like Temple Run or Crash Bandicoot. While I thought the 2D towers played fine, the 3D ones were harder to navigate. I had trouble judging the depth of certain obstacles and bottomless pits. Or my view was obstructed by obnoxious pillars blocking the entire screen. In addition, the towers’ aesthetics and obstacles go through a makeover for each new world. However, up until the last couple of areas, the worlds’ hazards are mostly identical, merely replacing spikes with buzzsaws or what have you.

Additionally, the towers are randomly generated, so annoying segments may haphazardly be placed near each other, like rows of spikes immediately before and after a pit. While random level design is a hallmark of these games, it sometimes felt uninspired, considering you start over at a differently designed tower following death. Luckily, you don’t instantly die upon getting hit. Rather, the screen turns red, and you enter a wounded state for about ten seconds. If you’re hit again before you can heal, you die. I liked the rush I felt from trying to survive the wounds. Unfortunately, it’s somewhat cheapened by the fact that you can slow down at will.

In fact, developer and publisher EnjoyUp Games describes the game as a semi-runner. Although you are always automatically moving, you can also slow yourself down to a crawl, or if you have speedrunner instincts, run even faster. I’m always up for blazing at supersonic speeds, but the ability to slow down seems unnecessary for an auto-runner. Since the first portion of the tower is an untimed gem collection hunt, you could theoretically take your time whenever you get hurt just to avoid death. And while we’re on the subject of cheap tricks, the hit detection is a bit unpolished, so you can actually run through some pillars.

It took me a couple of hours to get through the paltry 15 towers, and I only really started getting into it during the last few areas when I had a jetpack (surely you’ve seen a knight wearing a jetpack before). It comes too little, too late, though. Once the game ends, there really isn’t much to it, aside from replaying levels and going for high scores. This game could have benefited from an endless runner mode, which would complement the randomly generated towers and high score mentality. As it is now, I had little motivation to reenter the generically designed levels and hope for a lucky setup.

At least the cel-shaded graphics stand out. The game’s art design is eye-catching and colorful, even if the towers aren’t very detailed and mostly consist of the same imagery over and over again. Unfortunately, the game appears to run at a less than ideal frame rate. This leads to some choppy movement, and even worse, slowdown, neither of which are ideal for an auto-runner. Coupled with the long loading times, there might be some issues under the hood here. The soundtrack was an enjoyable mix of electronic dance music and trance. Although I liked the music, it does not fit the mood of the game at all and ends up feeling out of place.

Tower of Babel isn’t a bad game as much as it is generic and lacking. I liked the three tower setup, but additional levels (especially with the jetpack) could have expanded on it. Also, a more polished level design over randomly generated areas may have helped the game from feeling generic. And at the very least, an endless mode could have increased replayability. As a decent semi-runner, it could potentially hold your interest for a short time. But there is little reason to return once you’ve reached the top.