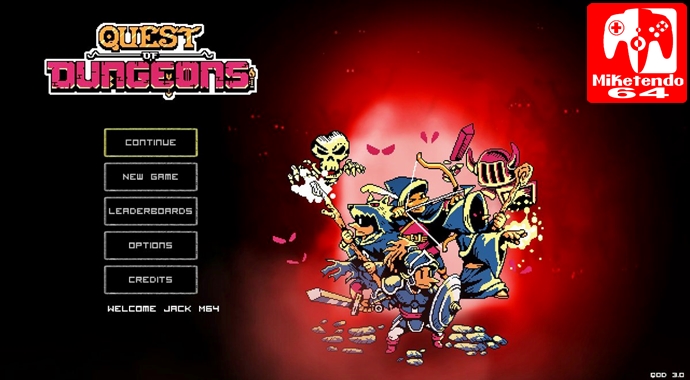 When development on Quest of Dungeons first began back in 2013, the game was originally planned for tablet devices, only it went on to see a release on several home consoles platforms Steam and now, it’s out on Switch, but is it any good?

The short answer to that question would be absolutely. As a dungeon crawler roguelike that features procedurally generated weapons, items and enemies, Quest of Dungeons is a 16-bit turn-based adventure that will see to it that no single player will ever experience the same quest twice. Yes that can be frustrating as Quest of Dungeons is one of those games where if you die, it’s time to start all over again, but what do you expect? It is a roguelike after all!

However it is a roguelike with four available characters of different classes with one being a Warrior, one is an Assassin, one is a Shaman and one is a Wizard and they each have their own way of doing things and handling themselves, so trying out each character once or twice is a necessity as Quest of Dungeons is one of those games where you need to pick the right character for your particular style of play. One such instance of this would be the fact that as well as having a health bar, which you will need to keep an eye on, characters like the Wizard and the Shaman  but let’s resume on that a bit later, for now let’s talk a little about the game’s plot.

It all starts with an Evil Dark Lord that steals all the light in the land and although there are four heroes who are friends with one other, instead of working together to go after the Dark Lord, they decide its better if just one of them go instead, with the one being the character you decide to play as, only as soon as your character leaves, the other heroes go from believing in you, to saying you’re so dead. But while it does in fact poke fun at itself, don’t for one second think it is a game you can blitz through in no time at all, I mean sure you can if everything goes as you would like it to, but the last thing you will want to do is run headfirst into the next room/level, as there is no knowing what you will run into, since there are randomly spawned enemies and bosses everywhere. (Seriously, one miss-step and you can end up being surrounded and despite your efforts to access the pause screen and gobble up some food to restore health.)

All that aside though, while Quest of Dungeons on Switch is very much so the game we have seen on other platforms that consists of a tile-based square grid from a top-down perspective and plays out in a similar fashion to the original The Legend of Zelda game on the Nintendo Entertainment series, in the sense of exploration, secrets, shops and side-quests, only there is more to the Switch version of Quest of Dungeons.

As part of new content made available for the new version, the Switch version has added things like achievements added in the form of Feats, there are various optimisations and tweaks and a whole new mansion added as yet another dungeon, so not only does Quest of Dungeons look and play better and have plenty of replay value, but now it also has even more content for players to sink their teeth into and if that’s not reason enough to give it a try, then I don’t know what is!

While Quest of Dungeons may not be on the same level as The Binding of Isaac: Afterbirth+, it is hot on its heels and is a true iteration as to what a roguelike could and should be, but it could do with more items and available weaponry, or even a different art style. I’m not against the retro look as it does work, but something a little more modern would have really made this game pop. Nevertheless though it is a good game and it has a lot of replay value, so if you like roguelikes and you haven’t picked it up yet, you should.