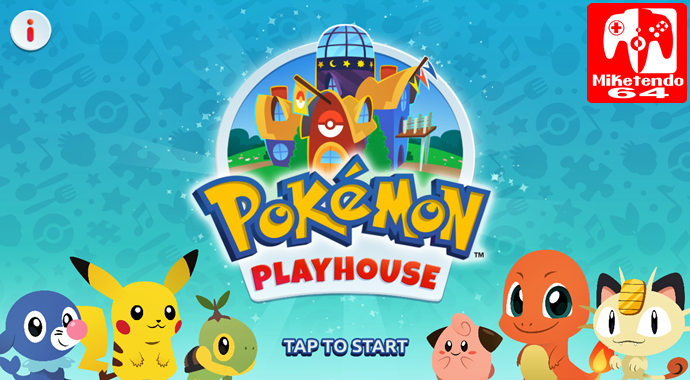 For all you Pokémon Trainer parents out there who are raising their own little Pokémon Master, there’s a new app out you might not have heard about and if you haven’t, you and your future Gym Leader are missing out.

Out now and available on both Android and iOS devices is Pokémon Playground, a mobile game that is aimed at those between the ages of 3 and 5, but is not limited to those ages as there are those who are far older and have immensely been enjoying it, despite some issues. Those “some issues” would of course be the blank screen issue many players were getting when they tried booting the app up, but with version 1.0.4 out, the blank screen issue is a thing of the past, so now when adults and kids start up the app, they can get right into the action! But what action be that then?

Well, being an app that has the word “Playhouse” in its name, it should be quite obvious as to what it is about, but since this is a review, the whole premise of Pokémon Playhouse is that the whole game takes place at a playhouse and at said Pokémon Playhouse, there are a whole bunch of activities for the players to try out in a bid to have fun with Pokémon. Only because this is a game meant for kids, there is no IV’s, there is no battling or learning about a Pokémon’s habits as such, as the only thing you will learn is their name and the sounds they make, but there is breeding!

In fact breeding plays a very large role, as when first starting the game and meeting a young girl whose voice you will be hearing a lot, (purely because she narrates everything and explains everything so that players who can’t read, don’t to as the female host will repeat information at every turn.) Anyhow, the female host gives you an egg, which you are told will hatch into a Pokémon and become a new Pokémon friend for you. Once your friend is hatched, you will then be given another egg and then another egg and another and another, because there are 52 Pokémon (which includes some from the Gen 7 games,) in Pokémon Playhouse that can be befriended and while some are friends to start off with, there are still more than 40 to befriend by hatching.

As for how to hatch an egg that requires playing any of the mini-games Pokémon Playhouse has to offer, but since no games can be played in the lobby area of the playhouse, you will have to pick a location. In the Playground, the only game here, is taking any of your available Pokémon friends and placing them in the playground, which you can see more of b dragging or swiping the screen left and right (all of the games controls and mini-games work via touch-screen controls that consist of dragging and swiping, with the occasional bit of tapping.) Once you have placed 6 of your Pokémon friends that’s the mini-game done and the egg will crack, but complete 5 mini-games and it will hatch completely.

Still why just hang about in the Playground when there are 7 other activities for you to engage in. For starters in the lounge area there is a game where you can feed Pokémon the meal in which they desire, which is shown via a bubble above their heads, or you can groom them with Pokémon Grooming. Here you can do things like brush them, clean them and even treat their injuries by giving them a bandage. In the Tower area though, you can play Pokémon Tunes which is a game where you can have a choir of Pokémon perform for you, but first you will need to tap Pokémon in the right order to establish the song they will perform for you.

Another game available in the Tower though, is Search the Stars, with the use of a telescope, players can look up at the night sky and see stars, which when joined together by drawing lines to connect the dot-like stars, can reveal the form of a Pokémon, which then requires colouring in by dragging your finger over the screen to fill the area. Even though I am an adult, I actually liked this game as I felt it was a nice touch, but there are still very other games worth mentioning though and they can all be found in the Play Room. Here players can do things like read through 3 available stories that pertain to tales about Pokémon, with Litten, Pichu and Cleffa being the stars. This is also the only game that actually has text to it, as none of the others do.

Then there is a puzzle game where you are shown an image of a certain landscape, like underwater, except there are Pokémon sized holes in the image and players are required to pick from the Pokémon pieces there presented with and solve the puzzle by placing the right pieces (this just so happens to be the quickest game of them all, but even then, they’re all pretty quick anyway.) As for the last game, that is Flashlight Tag and it is a game where you are required to go out in the dark and look for 6 specific Pokémon and shine your flashlight by holding your finger on the screen, over a Pokémon’s silhouette to find them. (Game ends when all 6 are found.)

Given the nature of the game, how quick the activities are and how grating the hosts’ voice can be, although the app can be played by adults, it can grow a tad tedious when played in lengthy sessions, but for a young child, it is an app that will keep them engaged, keep them hooked and delighted every time they acquire a new friend, so it’s a good thing that while you can play this app with your child, they can also play it without you, if you’re willing to let them. But as an entirely free to play and earn title, it is as good as any other way to entice your young Pokémon Master to fall in love with a series that you yourself feel in love with a long time ago and it doesn’t take up that much space on your mobile device so that is a huge plus right here!

If there is one universal truth we can count on when it comes to Pokémon, it is the fact that Pokémon applies to those of all ages. There is no discrimination and now with Pokémon Playhouse on the scene, even the far younger generation can get in on the fun thanks to it being free to download, free to play, cute as hell and does not need to collect personal information. So what are you waiting for? Your child’s journey to becoming a Pokémon Master begins now!