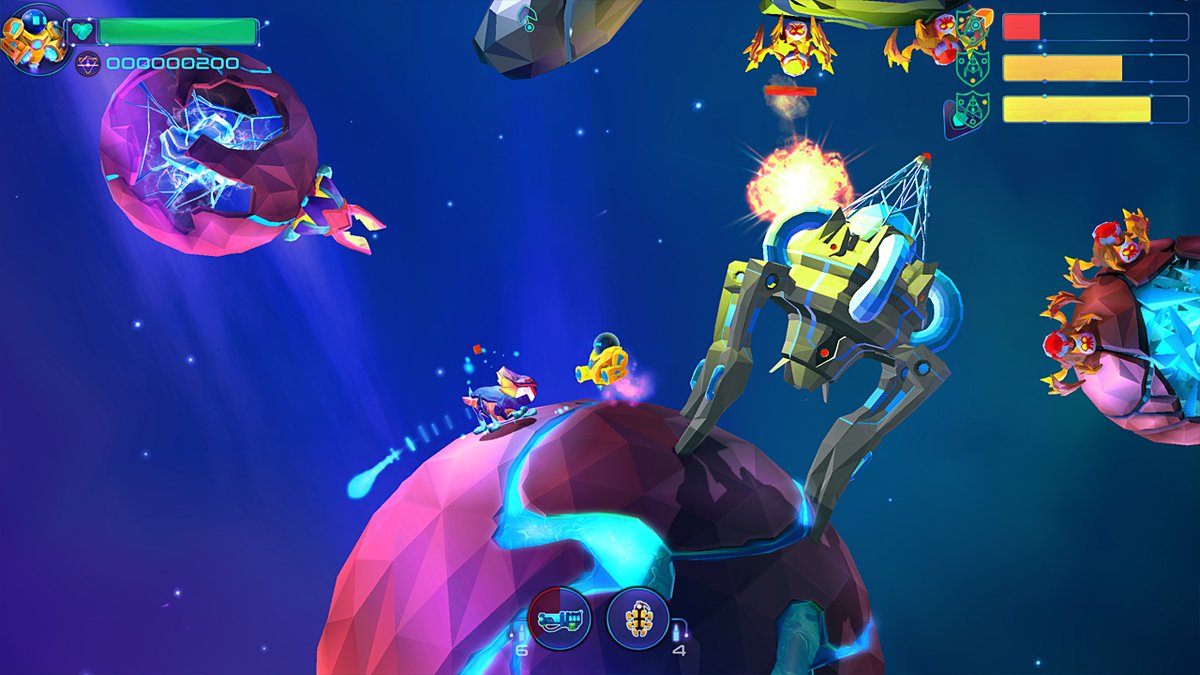 September 21, 2017 6:03 am Published by themancalledscott Leave your thoughts

Robonauts is certainly one of the more ambitious indie titles to hit the Nintendo Switch’s Eshop. With an opening cinematic that looks like a theatrical CG animated film, 3D graphics, and an electrifying techno soundtrack, Robonauts certainly feels a lot bigger than many other titles released under the same umbrella. But while Robonauts has a lot going for it in many respects – including some inventive level design – there are a number of more frustrating elements that end up holding the game back.

One could say that Robonauts is something of a run-and-gun platformer, but with the twist that its stages are based around spherical planetoids a la Super Mario Galaxy.  The player controls a robot who is equipped with a primary and secondary weapon, who has to blast his way through hordes of enemies and jump from planet to planet to make his way through the game’s twelve stages.

Despite only having such a handful of levels, Robonauts manages to find a good range of variety in its objectives. Most stages have you destroying enemy nests before an exit opens up, but others will have you activating lasers, escorting a hacking robot, or are simply platforming gauntlets, where you have to navigate the spherical worlds, avoiding deathtraps in the process. During stages, you can pick up different power-ups, which change the capabilities of your weapons, and can grab small green blobs called “Gloobs” to refill health.

While the spherical level design can be fun, and the alternate objectives bring out the best in them, the stages that simply have you destroying enemies quickly grow redundant, and the sheer amount of enemy spawns will grow frustrating even in levels with more unique objectives. Enemies will repeatedly spawn from their nests until destroyed, which makes sense. But there are too many instances where the enemy hordes just get out of control, to the point where you get lost in all the commotion. Robonauts almost seems to treat its stages as though they’re in the bullet hell genre, but the player character doesn’t have the means to justify such bombardments of enemies.

Very few of the weapons effectively defeat multiple enemies at once, and those that do have very limited uses before you go back to your default weapons. Not to mention your character automatically aims for the closest enemy, so if a more dangerous enemy is just a little further away from a less worrisome one, you won’t be able to attack it until you either move closer to it or destroy the weaker enemy. Considering there are some enemies who can drain your health in seconds (and there are no checkpoints, so every loss takes you back to the beginning of a stage), it all becomes incredibly tiresome.

There is some fun to be had with Robonauts. It has some good stage design, a pretty impressive presentation, and you can even play local multiplayer with cooperative and competitive modes. But even though the developers had a decent go at adding some variety into the mix, the game is just too short to fully capitalize off it, and the senseless hordes of enemies often feel like a cheap means to add more difficulty to the game (especially once you play the levels that are strictly platforming, and see how much more enjoyable they are).

There is a good game at the heart of Robonauts, but its shortcomings are ultimately too prominent for the game to leave much of an impression. Perhaps a sequel could fine-tune things a bit, and add a bit more to the experience. As it is, Robonauts is okay in the fun department, but doesn’t quite hit the mark it could have.