Miiverse, Nintendo TVii & Wii U Chat All Meet their Global End this November and Here’s Everything you Need to Know! 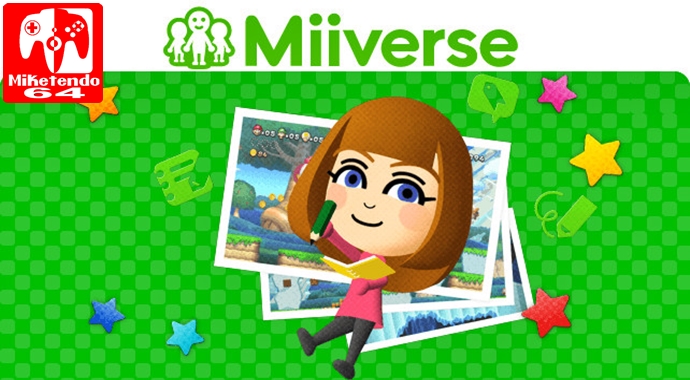 Bad news strikes again guys, when Miiverse ends on the 8th of November, it will be ending everywhere and it’s the same for Wii U Chat and Nintendo TVii.

We had naively hoped Western audiences might have a few extra days, but that is not the case, as all three services will end at exactly the same time, no matter where you live and for anyone who has any questions as to what all this will entail, Nintendo has already taken the liberty to answer them:

Why are you shutting down Miiverse?

We started the Miiverse service in 2012 along with the launch of the Wii U system because we wanted to provide a space where users could share their feelings about games with each other. Thanks to users’ support throughout the years, we think we were able to achieve that goal. We decided to end the service at this time because, among other reasons, many users are shifting to social networking services.

Users can download their old Miiverse posts (without comments or messages from others) by visiting http://miiverse.nintendo.net and registering before the Miiverse service ends on Nov. 7, 2017 at 10 p.m. PT. Once registered, users will receive an e-mail via Nintendo Account mail a few weeks after the Miiverse service ends, which will include a unique URL to download their past Miiverse posts.

When will the Miiverse service end?

Once the Miiverse service ends, users will not be able to access Miiverse on Wii U, any of the Nintendo 3DS family of systems or an Internet browser on PCs and smart devices.

Will the Miiverse icon still be displayed on the Wii U and Nintendo 3DS Home Menu?

Yes. The Miiverse icon will continue to appear, but an error message will be displayed when it is pressed.

Many games use Miiverse as a major game-play feature, including Super Mario Maker for Wii U. What happens to those games when Miiverse shuts down?

Super Mario Maker (Wii U): Users will still be able to share levels, but will no longer be able to comment on them.

Mario vs. Donkey Kong: Tipping Stars (Wii U, Nintendo 3DS): While users will still be able to play Mario vs. Donkey Kong: Tipping Stars and complete all 88 levels in the main game, the Community feature will be discontinued, preventing players from sharing levels and receiving additional Stars. As there will be a limit to the number of Stars that can be obtained, not all objects may be unlocked from the Workshop.

Splatoon (Wii U): Miiverse posts will no longer display in Inkopolis Plaza or the game’s stage maps.

Mario Kart 8 (Wii U): Players will not be able to upload game-play videos to YouTube since they also post to Miiverse at the same time. The tournament function will also not be available.

Super Mario 3D World (Wii U): In Super Mario 3D World, the Miiverse posts that appear on the course select screen and when selecting courses will disappear. Players will still be able to collect in-game stamps, but not post them to Miiverse.

*To view the complete list of games and features affected by the Discontinuation of the Miiverse, be sure to click on this link below:

Mario vs. Donkey Kong: Tipping Stars will be losing major features. Will you continue selling the game?

Yes, the game will continue to be sold. Users will still be able to complete all 88 levels in the main game, and create and play their own levels locally.

Will Miiverse posts still display in Wara Wara Plaza on Wii U?

Will Wii U Chat still function after the closure of Miiverse?

Can users still view their old Miiverse posts once the service is shut down?

Users can download their old Miiverse posts (without comments or messages from others) by visiting http://miiverse.nintendo.net and registering before the Miiverse service ends on Nov. 7, 2017 at 10 p.m. PT. Once registered, users will receive an e-mail via Nintendo Account mail a few weeks after the Miiverse service ends, which will include a unique URL to download their past Miiverse posts.

Will there be a similar service to replace Miiverse on Nintendo Switch?

Currently Nintendo has no plans to implement any services to replace Miiverse, but the Nintendo Switch system includes features for connecting with Facebook and other social networking services.

Information: After almost 3 years of finding, watching and engaging with Nintendo TVii, we will be ending the service on Nov. 7, 2017, at 10 p.m. PT.

We are deeply thankful for all of the engagement and excitement our users have generated and enjoyed while using the service.

Even though the interactive, second screen experience of Nintendo TVii will be winding down, you can continue to watch your favorite shows and movies through the multiple Video on Demand applications on the Wii U console.

We sincerely thank you for your continued support of our company’s products and services.

Why are you shutting down Nintendo TVii?

Every service has a life cycle, and it is time to focus our resources on other projects.

What is the shutdown date for Nintendo TVii?

What will change on my Wii U?

The Nintendo TVii icon on the Wii U Menu and Home Screen will be removed with a system update and the service will no longer be available.

What about the TV button on the GamePad? Will that be removed?

If you have set up the remote control feature on your Wii U, the TV button on the GamePad will continue to launch the remote control functionality for your television and cable/satellite provider (if applicable). This feature is not affected by the shutdown of Nintendo TVii.

Does this mean you will be adding a new feature to Wii U to replace Nintendo TVii?

We have nothing to announce at this time.

Are the existing Video on Demand applications affected by this end of service?

No. Netflix, Hulu, Amazon Instant Video, YouTube, and Crunchyroll are not affected. You can continue to use these services through their Wii U applications.

Once again, Nintendo have hammered yet another nail in the Wii U’s coffin, but it does not mean it is time to throw it in the bin as there are still plenty of titles gamers can play, before Switching up.