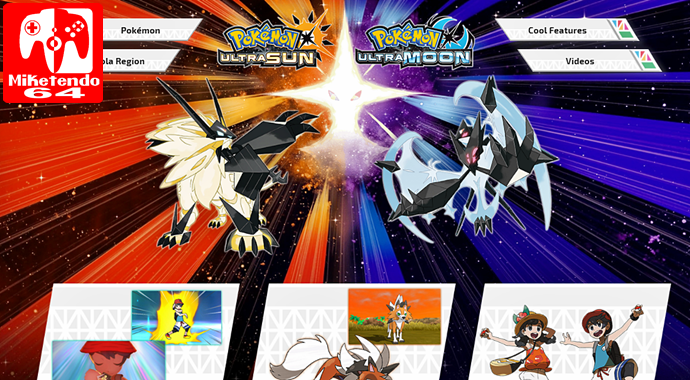 With the exception of the recent Lycanroc (Dusk Form) news, there has been no Pokémon Ultra Sun and Pokémon Ultra Moon news whatsoever, but today that changed!

Not only was a new trailer put out and a couple versions of them, which we’ve shared above, but the official site for the Ultra Gen 7 games was updated today and with said update, comes plenty of new details, so we’ve gone ahead and rounded them all up for you to check out:

In Pokémon Ultra Sun and Pokémon Ultra Moon, a story unfolds on a grand scale, with the Legendary Pokémon Solgaleo, Lunala, and Necrozma at its center. Secrets about Necrozma and the Alola region—undisclosed in the previous games—will come to light.

New Look for a New Adventure:

The look of the main characters’ outfits has changed from the first trip through the Alola region—just in time for them to begin a new adventure! Choose the Pokémon that will become your partner, and set out on a journey through the world of Alola!

Z-Moves are moves of tremendous power—so powerful that they can only be used once per battle. When a Trainer and their Pokémon combine the force of their wills, the full strength of their effort bursts forth in an epic Z-Move! All Pokémon can use Z-Moves. To use a Z-Move, you must have two key items: a Z-Power Ring and a Z-Crystal.

More Fun with the Z-Power Ring:

In addition to all the new details, box arts for both games have been shared and you can see them right here:

For further Pokémon Ultra Sun and Pokémon Ultra Moon developments, be sure to check back as we’ll be providing plenty of coverage as it comes.