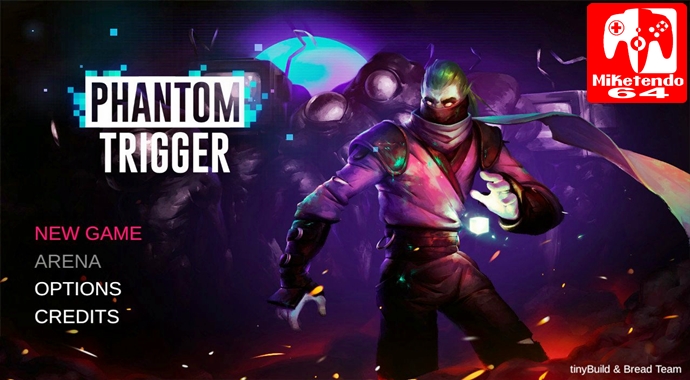 If you own a Nintendo Switch and need some neon hardcore slasher videogame excitement in your life then good news! Hardcore neon slasher Phantom Trigger is out now and I’m ready to put it through its paces as I conduct yet another Nintendo Switch review.

While Phantom Trigger is published by the rather brilliant tinyBuild Games, it is the creation Bread Time, which is comprised of two guys, Victor Solodilov who handed code and design and Denis Novikov who did art and design and proved to be more than I expected. I went into Phantom Trigger expecting a roguelike experience with RPG elements that would require me to do little more than mash buttons from beginning to end. Then I played the press demo a while back and discovered there is a story and it’s a particular bad one, but now that the full game is out, I’m even more impressed.

By no means is Phantom Trigger a ground-breaking game that changes all the rules, but it is a game that tells the story of Stan. A man desperately needing medical attention, but refuses to have the surgery that could save his life, despite his wife’s pleasing him to get. Only as important as Stan is and the events that follow his storyline, he isn’t the only character in Phantom Trigger whose story gets told, because so does the story of the Outsider. Essentially the Outsider is Stan, a Stan lost who is lost in a demented and decaying world of his own creation as he escapes from the reality of his real life.

I found the story to be enjoyable and had a decent progression to it, but you will need to pay close attention to what goes on and what you choose to say and do (like burning spices for a certain cook,) as Phantom Trigger has 4 different endings and the majority of the time, you can expect to get an unpleasant one. But if you don’t much care for morality choices and saving Stan’s life and marriage, maybe you’ll care about the neon slashing action instead.

With 5 worlds to explore and two difficulty settings to play (Normal and Hard, with Hard being the default,) Phantom Trigger is the dip into madness gamers often relish in, but it is a hardcore game that delivers on its promise of hardcore action, as the 5 words you must venture through are packed with cancerous looking enemies. Even on Normal mode the majority of the time it is foolish to towards a horde of monsters, mashing buttons, expecting to come away unscathed as these beasts do not play nice. They each have their own form of attacking and when you’re locked in with a group of them, with your health bar desperately low and theirs a white burning light beneath the beasties, symbolising they are currently invulnerable, not only do things look bleak, but they look so bleak that they’re dire and when playing in Hard mode, it’s even worse, especially when the framerate slows and dips on World 4.

Still at least the actual fighting is interesting when you’re within the first hour of your play through, as you can use a number items, such as a sword that deals ice damage, which is displayed via a neon blue colour, and fists that when thrown, burn your enemies due to their fiery red nature, but then there’s the whip. While it may not have the capability to deal damage to those deserving of it, it can strike objects, which then allows you to aim in the direction you would like them to fly and pull enemies towards you, so you can get up close and personal as you shove the Outsider’s fiery fist down their throat.

But as effective as the weapons may be in the beginning, the enemies soon get tougher, which means you will have to do the same, so fortunetly, every time you do hit an enemy, it does go towards levelling up the weapon you use to hurt them and if you you level it up enough, or even all of them, you can unlock some pretty swanky combos, which can soon turn up the heat, or momentarily freeze the cancerous beasties (dealers choice.) However should you die, which you will do and do it a lot (so much so that if this game wasn’t repetitive enough because of its hack and slash nature, the whole “having to repeat what you just did five times previously to no avail” thing, really dials up the repetitiveness of Phantom Trigger.)

The only two things you can do to try and counteract the constant repetition is be thankful that there are plenty of checkpoints all over each world and be a little bit more strategic with when, why and who you pick a fight with, as this can help you die a little bit less and if you can’t do that, you can always run instead. I don’t actually recommend such a thing as you will want to level up as much as possible before every boss fight, as they can seriously take some doing, what with being engaging, enjoyable and downright bonkers, but at the end of the day, if you decide to run, than that is your decision to make.

Besides, running is actually a pretty good thing as once you reach a checkpoint on the code (which restores your life for you as there are no health items found within the levels, only key items for characters and story progression,) you can immediately run your way over to another one that you activated previously and reactivate that one, or you know, explore the vast dark worlds that require a lot of attention. I didn’t just get lost once or twice, I got lost lots of times because Phantom Trigger has no intention of holding your hand. It will bluntly tell you what you need to advance, most of the time, as there are plenty of hardly noticeable, subtle hints, but there’s also no map system at play, which makes the exploration aspect of Phantom Trigger even harder.

At times it is fair enough to want to give up with frustration as you know you are missing something vital, yet only seem to keep going over places you’ve been to time and time again, but it is rewarding in the sense that at least you are trying to be through and with obelisklike monuments placed throughout the worlds, accessing them can great l give one of your various weapons a fine tune-up thanks to the quantity of experience points they’re willing to dish out and even then if you’re still not keen on all that Phantom Trigger has to offer, it also has a co-op mode.

Yes you heard me correctly! Phantom Trigger review comes packed with a co-op mode, so if you have someone you would love to make your Player 2, such a thing can happen and the two of you can work together to overcome this dreaded nightmare, only there is a slight hoo-hah. A hoo-hah which is the fact that players actually share the same life bar, so if one of you gets hurt, you both feel it and if one of you dies, well you’ll both be pushing up daisies. Still should you find a way to make it work effectively, co-op can be an enriching experience that gives Phantom Trigger that little bit of oomph and talking of oomph, there’s just one more thing to cover.

While it’s story mode isn’t too shabby and can require around 7 and a half hours to complete, beating said story mode will unlock Arena mode, which is more of the same of what you’ve had to do already, in the sense that you will have to battle a whole ton of monsters from a given world and then the boss of said word, but as intense as it may be, and off putting for go-lightly players, it can actually be a rewarding experience that some indie titles on Switch just don’t offer, so if you want to go hard, you have to go Phantom Trigger!

While there are some good ideas at play, the combos are smooth to use and the 4 different endings all offer something different, Phantom Trigger is more of a game that pays homage to its chosen genre, as opposed to trying to make the genre its own. There are no new ideas per se and the game does come across as the developers were trying to play it safe, but god dammit it I enjoyed the experience it has to offer and can see this game becoming an quick favourite for a lot of hardcore gamers out, which is a shame there aren’t more of them and sure there are some framerate issues when playing on Hard Mode, but Phantom Trigger does come across as a smoother port than Mr. Shifty, but all in all, it’s really not a bad game to add to your growing collection if indies on Switch.