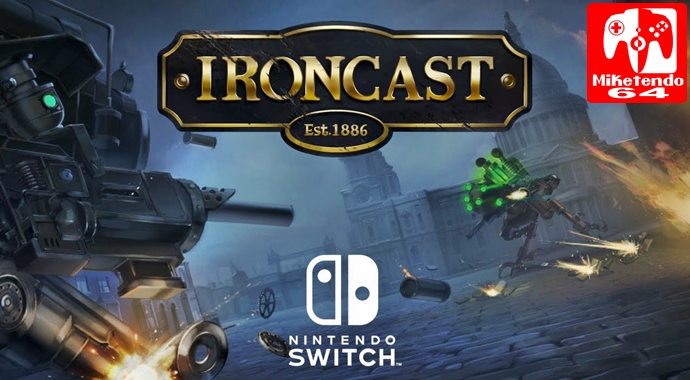 In the five and a bit short months the Nintendo Switch has been available, more and more games of every genre have been adding themselves to the eShop and this week, we get a touch of classic steampunk turn-based action.

On the surface it is a striking looking game with mechanised robots used to fight a fictitious war, but delve beneath its surface and what you’ll find might surprise you as this match-three kind of game, has so much depth you’ll need a long rope should you wish to ever climb out. It isn’t just your standard match-three kind of game, it’s a roguelike, so should you fail in battle, you will be blown to smithereens by the enemy and forced to start all over again, with very little to show for it, aside from Commendation Marks you’ll be awarded with (the exact number you’ll get is determined by your progress prior to dying.) But let’s dial it back a bit on the gameplay and history and focus on the story. (There’s plenty of time for paragraphs focused on gameplay later.)

Set in an alternate, yet very dapper steampunk Britain, in the year of 1875, France developed a new clean energy source they named Voltite, only the French reused to share it. With no other choice, Great Britain stole some samples and then refused to give them back when France demanded it. Feeling outraged because of the refusal, there was only one thing that could be done, to wage war.

Years past and despite efforts on both sides, neither one was able to secure a foothold on the other nation’s land, so the rules of war had to be changed and the Ironcasts were born. Well, I say born, they were manufactured, and although the 7 metre tall mechs were formidable machines, the ones designed by the governments and the armed were not perfect, but perfection was on the way. Designed by rich businessmen and wealthy aristocrats, a new class of Ironcasts was created and it would be the rich who used them in battle.

Given the rank of Commander, the financers of the new class of Ironcasts came to be known as the Consortium of Merit and it would be their efforts that help bring the war to an end, but before it can end, it must be fought in 1886, which is exactly where the game picks off, right after Commander Ares Powell and her Ironcast has survived an attack in London. With her systems badly damaged, the game’s tutorial can begin by giving you a lesson in what’s what and get your systems back online!

So what are the systems exactly? Well two are for weapons with Weapon A being a lightweight weapon and Weapon B being the heavy duty variety that deals a great deal of damage. As for the other systems, they are your Defences and Drives. Defences are of course great for raising your defences to reduce damage, whereas Drives are used to get your Ironcast moving and the more it moves, the more likely fire from enemy Ironcasts will miss, but if there’s nothing in the various tanks then you’ve got to fill them and that’s where the real gameplay comes into it.

When undergoing missions, two images are shown, one that will show your chosen Commander and Ironcast to the left (there are both 7 Ironcasts and Commanders in all, but only one of each is available from the start with the other 6 requiring Commendation Marks to unlock them.) On the right, the likes of your opposing Ironcast will be displayed, or the target of your object, whereas in the middle, there is the contents table that displays the various nodes you must match up and the weapons in which you can fire and other systems to be utilised.

Now to be in with the chance of firing your weapons, you will need to match at least three ammo nodes that are green in colour, but this will only let you fire once depending on what you’re using, so do yourself a favour and try to match up as many as possible to fill the bar. (There is an Ammo gauge, Energy gauge, Coolant gauge and Repair gauge and depending on which Ironcast you’re using and how you’ve upgraded it, the limit can differ.)

To move and raise shields, you are required to match at least three orange coloured Energy nodes, but because it’s for your shields and movement, it is better to try and match up as many as you can. Should you sustain damage though, like your shields being destroyed, you can of course repair them by pairing up the green repair nodes and once you have at least 5, press Y to open your repair systems panel. This mini menu will show you your 4 systems, with each one showing a designated button and pressing one of them, will repair the system you choose.

But if your systems are tapped out and you wish to damage specific systems on your enemies Ironcasts, then press X to open up a similar menu to that of your repair systems one and this time when you press one of the displayed buttons, it will mark the chosen system as your intended target and because I have yet to mention it, with regards to the node matching, you can only match nodes when they are the same colour, or there is a link on the map and by linking up with it, you can now link up with a node of another colour, but would then have to continue linking to that new colour. (For example, if you’re matching up repair nodes, pair to a link node and then link to ammo, you can only link to ammo nodes unless you pair to another link node.)

As for the most important nodes you will need to match up, they’re the blue coloured ones, aka Coolant nodes. You can fire your weapons as much as you want and run as fast as you want, but it’s no good if you’ve used up all your coolant, as performing an action can then cause your systems to overheat and cause damage to you. Other than the coolant, there is no limit as to how many times you can act, so be sure to make the most of every move you can in this turn based adventure, but just know you can only match up nodes twice before after carrying out your final actions and ending your turn.

From that point on, your enemy gets their turn, only you don’t get to see what nodes they match up, so be prepared to be kept guessing. Also, as for the whole linking thing, that can be done one of two ways, you can either do it via touch, or move the L analogue stick, while holding A and if you see nodes with a star on them, they are Commendation nodes/marks which can be used later on when using the Commendation Exchange, which can be seen on the main menu of the game.

Finally when all is said and done with the first/tutorial mission, and you have successfully cleared the debris by destroying it, it is time to report in to the Hanger Bay, where a free fix-up awaits you and a multitude of tasks await you. For starters, although the first repair is free, every repair after requires you to pay with scrap (in-game currency,) which can be earned from your efforts on the battlefield, along with something called War Assets that can be especially vital for the final battle, (if you make it that far.)

So to give yourself a fighting chance, why not check out the local store? Granted there’s not much you can do when starting out, but it is the place to go to buy system upgrades and new weapons, once you’ve acquired the blueprints for them via emerging victorious in battle, but nothing comes cheap so try to make sure every purchase counts because a single mistake can be your undoing in the grand scheme of things, but there are things like Passive Augmentations and Abilities, but you’ll need to level up to be entitled to warning them.

With not much else to do when starting out, there’s nothing else to do then press + to go to the mission map and see the choices open to you, but before storming right in, be sure to read up on each one. Some missions just require you to battle another Ironcast. Some will require you to trade, salvage missions desire you to battle an enemy Ironcast, but not damage a specific system and some, well they require you to survive for 10 turns and if you’re going to try that, you will want to have as much life as you can possibly get,

There are also collection missions, where you are required to collect a certain number of things, which is done by matching up wooden boxes when matching nodes. Whatever mission you complete though, it will award you things like XP to level up and scrap and War Assets and it will keep awarding you these things until the point you die. Once dead it is time to cash in those Commendation Marks, buying whatever it is you desire like upgrades and new Commanders and diving right back into the action. Ever seen the Tom Cruise film Edge of Tomorrow? The whole Live, Die and Repeat thing? Well that’s exactly what’s going to happen until you are eventually able to defeat the big bad boss, or loss your mind in the process.

If you’re going to play Ironcast, than you need to not only be open to the idea that you will die, but embrace it. Unless you strike it lucky you will never emerge victorious during your first play through. You will instead die, and die and die, but every time you do, you will either last longer, have learned something new, or just wasn’t paying attention. Ironcast is so deep, so rich and requires a lot of attention and time and if you aren’t willing to invest both, then you are just wasting your time because it means Ironcast is not for you and you are not for it.