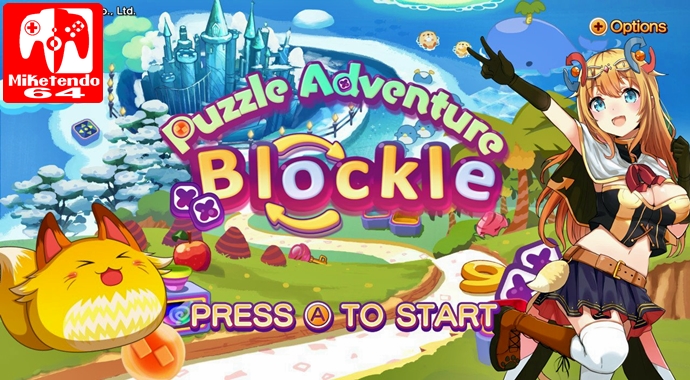 Have you looked to the sky and thought, “I’d love to turn the world on its head?” Well that’s never going to happen in the real world, but it can happen in the latest puzzle game to come to the Nintendo Switch this month!

Developed and published by Intense for Japan and published by Rainy Frog Games for the West, Puzzle Adventure Blockle is a puzzle game, where you can in fact turn the world on its head, in an attempt to solve perplexing puzzles. Rotate the screen too much and you might even feel sick and if you do, think about how the poor Chibi styled Kulu feels.

While you’re able to sit back and relax, flipping the world as you see fit (rotating it 90° degrees at a time when pressing the R button to rotate Right, and the L button for Left,) Kulu the “Hero Kat” is inside it, rotating with it and there is nothing worse than being tipped over and landing on your head. (Not that such a thing occurs in game, just the occasional drop on spikes though.)

Still at least Kulu does not have to go questing on his own and because the explanation to that trudges into story land, we may as well get the story out of the way. Puzzle Adventure Blockle takes place in the Wonder Labyrinth. A world that is full of “mysterious creatures of sorts” and out on the edge of it, is Katz Village, home to the cat-like creatures called Katz. One Kat in particular is Kulu and Kulu is called upon by the Mayor for an epic mission.

A mission that requires Kulu to gather up the 7 World Stones so that the Mayor can take over the world (yes, your job is to help a scrupulous Mayor to take over the world.) But hey, you don’t have to do it alone as you are accompanied by a Goddess no less. Summoned by the Mayor, an anime girl by the name of Arika makes her appearance via some pervy close-ups and it is she who possesses the whole world flipping powers. (She is a Goddess after all, who for some reason, throughout the entire game, has one hand groping herself.)

From that moment on, the two must work together to explore 8 playable “Worlds,” which are all part of the Wonder Labyrinth, only if you think the story is a bit mundane, it does actually get a lot better, especially right near the end when the old twist makes an appearance and you’re actually slapped in the face by context and depth. Up until such time near the end though, the story is light and very tongue in cheek, alluding to the level of perverted debauchery displayed earlier on when Arika made first showed up. Clever, yet dirty remarks aside, the writing is actually nicely done and fits in well with the art and world created in unison with it.

But that’s enough about the story and the dirty writing, because if I were to spend more time writing about it, I’d probably start directly quoting it, so instead, let’s move on to the actual gameplay. While a lot of it consists flipping the stage/map/world on its axis, there is a little more to it than just that. Firstly all 80 playable worlds have a certain mission goal for you to complete in order to get to the next one and sure in the beginning it’s mostly just escorting Kulu to the open door, but that doesn’t last particularly long, Soon the goal is to collect the goal to unlock the door, then it’s collect all the apples on a single level, collect all the numbers from the lowest number to the highest.

It all sounds simple when you put exactly how I put it above, but being a puzzle game, Puzzle Adventure Blockle soon turns up the heat as new gameplay mechanics are introduced in every “world” and while you only have to deal with things like Hard Blocks that remain in a fixed position, there was blocks that also move, like Flame Blocks that put out flames that will burn you and shock blocks that will shock you. Heck, there are even Gorgon Blocks that when activated, emits a gas that fossilizes Kulu, turning him to stone and making him invisible, but that’s actually a good thing.

You see, Puzzle Adventure Blockle is a puzzle game where Kulu has 5 hearts and if he loses all 5 hearts in a single level, because he was crushed by a falling block, burnt to a crisp or just fired, then its game over. Although that doesn’t actually mean anything as you can always just retry the level that killed you and should you make a slight balls-up when playing, you can always hit the Y button to undo your mistake, but it does not restore any hearts Kulu loses upon taken damage. And just in case there wasn’t enough going on in the puzzling levels, every level has 3 stars that can be earned by completing missions and once such mission can only be completed by collecting every and all Piece/Pieces encounterable on each stage. (Most levels only have 1, whereas some had 2 and 3.)

Should you prove smart enough to complete the puzzle you’re confronted with, fulfilling all the requirements, which can range from completing the map in a certain number of steps, turns and even using limiting your usage of warps and magnetic blocks, you will earn yourself a Crown and all though it is encouraged to earn the crown on every level, there really is no point. The stars and the crowns serve no real purpose other than bragging rights, so while this game has a lot of pros, this area however is a con as the stars serve no real function.

What’s worse though, even if you get every star and crown on the 80 available levels, beating the game lets you unlock a new hard mode that has you having to play the same 80 levels you’ve already experienced, only now they’re much harder and more puzzling than ever, but if you love puzzle games than it’s not an issue. Still do not underestimate how difficult this game can be, because there are some levels that will have you stumped for hours and if you can’t beat it, there’s no moving on or way around it. If you get stuck on a level, you’re stuck on it until you’ve beaten it. There are no shortcuts, so get ready to be frustrated a lot, because while Puzzle Adventure Blockle can be fun and highly enjoyable, it can also be very maddening and not always in a good way.

With crisp graphics, a clean UI and a polished presentation with gameplay mechanics that evolved as the game continues, Puzzle Adventure Blockle is very good puzzle on Switch, if not one of the very best the Nintendo platform has to offer. Yes it will infuriate you, it will do that quite a bit and stump you hard, if the likes of Death Squared and I and Me aren’t to your liking, than this is the best alternative you’re going to get!