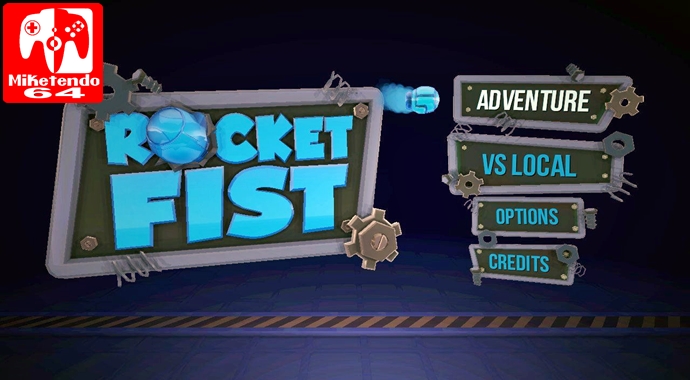 As far as Switch is concerned, it has plenty of games that are good to play with others locally and online and Rocket Fist is a fantastic forthcoming indie title that is bound to go down with the players!

Having received a review key for the game earlier this week, I have spent the last few days playing it on and off in-between Slime-san sessions and so far, I love almost everything there is to love about Rocket Fist. It has easy to learn controls, a charming look about it all and a soundtrack by Thiago Adamo that truly compliments all of the ensuing action, but that’s enough about all that, for now.

Instead let’s talk about exactly what Rocket Fist is. Rocket Fist is quite literally a video game version of the TV series Robot Wars, if the robots of Robot Wars was only allowed to use a fists as a weapon. All battles take place in an arena where up to four robots can battle it out to see which one of them can get the most kills or just be the last one standing, only landing a blow could turn out to be a lot simpler than you’d imagine. Kind of like ARMS, the fists in Rocket Fist can actually zoom across the map and rebound off of walls until losing all power. Should they hit a rival bot they will destroy hi, and if they hit you, they do nothing at all, but with some fist flying action going on all around you, watching where you tread is a must!

Although as well as being a Robot Wars-like game, it’s also a lot like Dodgeball because once your fist has been let off (only one can be wielded at a time,) you will need to run for your robot life! (Trust me, this is an effective tactic.) You will also want to avoid whatever fists come your way, until you can recover a fist that has been let off by any player and return to the offensive, just don’t try to die. Additionally you can catch the fist when thrown at you, but that does require some perfect timing!

Rocket Fist may not sound like “all that” going by the paragraphs above, but that is really not the case as Rocket Fist is very engaging and its multiplayer experience is the sole reason this game is worth buying. Sure there is only one style of robot to play as, but that one robot is available in 9 different colours (Green, Orange, Blue, Pink, Purple, Red, Yellow, White and Black.) There are also 9 different costumes for your bots to wear, which consist of None (default appearance,) Fancy, Claus (as in Santa Claus,) Pirate, Ghost (which looks a lot like the Ghosts from Pac-Man,) Pool, Teapot, Fist, DJ, Sick, Unicorn (not kidding, there is a Unicorn costume) and last but not least, Fez. (Your chosen robot wears a Fez on its head and to Quote Matt Smith’s Doctor Who, “Fezzes are cool.”)

Still it’s not just all the customisation options that make multiplayer the stand out experience that it is, it’s also the range of arenas (9) and two sweet, sweet modes that are Deathmatch and Survival and before you ask, yes you can play as a team, you just have to make sure your robots are the same colour. As for how survival works, once you have decided on how many lives everyone will have, and a level, the game can begin and you will battle it out until one on of you is left standing.

Be warned though, you can only die once per round, so if you select five lives, the quickest game you can have is five rounds, provided you’re able to kill everyone else and not die yourself. Still even if you do die, the matches are always quick and just because you’re down, you’re not out as your character can then circle the map as an even bigger robot, shooting a small ball that can momentarily stun whomever it hits and causes them to drop their fist. (This is a great way to help out a surviving team-mate.) And then there’s Deathmatch.

Deathmatch is very similar to Survival, except instead of everyone having a set number of loves, the lives are infinite and you are now battling to get the targeted number of kills, (optional target numbers are 1, 3, 5, 7, 10 and 15). To make things even more interesting for multiplayer though, there are also a range of Power Ups players can pick up in battle to give them an edge. Power Ups like Shrink, Flame On, Run Faster, Slow motion, Bubble, Shield and even Run Faster. (Note for the reader, that’s not all the available Power Ups Rocket List has to offer, just the ones I chose to name.)

The local co-op isn’t just good, it is sublimely good and thoroughly enjoyable, but for those of you who like a single player experience, there is a single player mode entitled “Adventure.” In Adventure there are 6 Sectors in all to play through, with Sector Zero acting as a tutorial and five fully fleshed out sectors each, that are made up of 5 smaller levels, with a boss battle being the final one. Adventure mode is a great way to learn your skills, has interesting enemies like a corrupted mechanised big spider that when hit, becomes smaller as it multiplies into two, but don’t worry, your fists will soon take care of them.

Admittedly the Adventure mode is short in size as it is something you can blitz through in an hour, but it’s an eye opening and just as enjoyable as its multiplayer modes and the cut-scenes at the beginning and end of it aren’t that bad either. As for the final battle, I won’t tell you what happens, but even I wasn’t expecting just exactly what it was I was facing, but you know what? That final battle was the perfect way to end adventure mode. Sure more levels would be nice, but with an awesome multiplayer on hand, additional content really is not necessary!

Rocket Fist may not have as much going in in the single player campaign, as some players would like, it truly makes up for the “lack” of content with its multiplayer mode. There are plenty of customisations and it is just a lot of fun when playing with others and on your own! So much so that in combination with its graphics and pleasing robotic soundtrack, Rocket Fist is a must own title for Switch! So when it does finally become available, be sure to grab it with both hands!