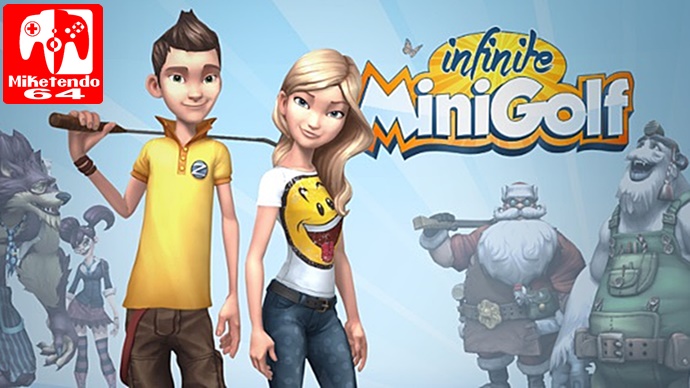 I was never too keen on golf as a sport and I have always shied away from videogame representations because I couldn’t think of anything else more boring and yet I am about to review a golfing game for the first time. To be fair, Mini Golf or “Crazy Golf” does have a more “Fun” appeal to it with its varied courses with their own themes and Zen Studios have managed to catch my wavering interest with Infinite MiniGolf.

If you was to cross Super Mario Maker with Crazy Golf, you will get this game, as not only does it have a fairly well rounded single player and multiplayer, Infinite MiniGolf also comes with it’s own Course Editor so you can create your own courses and share them with others to play on and vice versa, there are a near infinite amount of courses for you to play when you are feeling bored and there are three different themes to choose from which include; Giant Home, Halloween Mansion & Santa’s workshop to give more variety to your courses.

If you are one of those folks that just loves to customize your avatar then you will happy to know that this game has you covered. There are so many customization options that you could easily spend gaming sessions just messing around with the different clothing options, ball appearance or even different golf clubs, fancy using a baseball bat instead? Well get your level up high enough and you can purchase one!

As regards to game modes, there are a few to take your pick, the Single player offers Tournament, Quick Play, Editor & Course Browser. Local Play will allow up to 8 players to take it in turns on a single Switch console and Online play will allow up to 8 players to play together online. Tournament Mode is where you can play against 3 AI players for 10 rounds on various sets of courses that also include a themed character. Some of these characters can help or hinder your progress by sending your ball straight to the hole or as far away from it as possible or even out of bounds. These characters depend on which theme you are playing so if you are playing on the Halloween Mansion Courses, you will get Werewolves, vapires and ghosts and in Santa’s Workshop, you will have Reindeer, Elves and Saint Nick himself.

Each Tournament theme has for different sets of courses with their own mascot and also have three modes of difficulty which you can only unlock by completing all of the current difficulty options available. This means that over the three themes available and each with their own mascots and difficulty settings means that there are 36 different tournaments to choose from not to mention the many user created courses that have been uploaded to the game’s server. All of these courses share a simple goal, to get the ball in the hole in as few strokes as possible and/or with the highest score. There are many obstacles to get past and power-ups that you can use to overcome them like the rocket to give you a boost in the direction the ball is going or the control stick so you can move the ball manually until it loses momentum. There are gems that you can collect to help improve your score but the most point that you can ge is usually with a Hole in One along with collecting some gems along the way and bouncing of the cushion for extra points.

Going back on the subject of customizing, you have to increase your level which will unlock more items which you can buy with point cards. To get these point cards, you have to play Tournaments and other courses to earn them. There are also missions that you have to complete in order to get coins which you can use to buy packs that will also give you point cards and even items for your Avatar. If you want to get to the good stuff like having an anchor for a club, get ready to grind your way through the missions to get as many coins as possible.

What does make this game appealing is that it has such beatuiful graphics. I am glad that Zen Studios have managed to get such a sharp and colourful looking game working incredibly on the Switch, I have yet to experience frame-rate drops the level of detail that goes into each course can sometimes be distracting and make you want to wander around the levels to explore their beauty. The music is fun and I have yet to turn it down because it is grating on me. In fact I turn the volume up so I can enjoy every note.

Infinite MiniGolf is a great little game to own and at $14.99 it does feel a little pricy but with the possibility to make your own courses which you can play on with friends and share online, it does go a great deal to compensate the price tag. There is plenty of content but I would like to see continued support which would bring more themes to the game like maybe an Ancient Egyptian theme or maybe a Space theme. This could come as free DLC or even with a small purchase fee. I feel that this is more than a deserving title to own on the Switch and can be enjoyed by everyone. So I think that 8/10 is a good enough score for Infinite MiniGolf which does offer plenty of content, plenty of fun and with the extra option of being playable anywhere on the Nintendo Switch, any time is a good time to play Infinite MiniGolf.