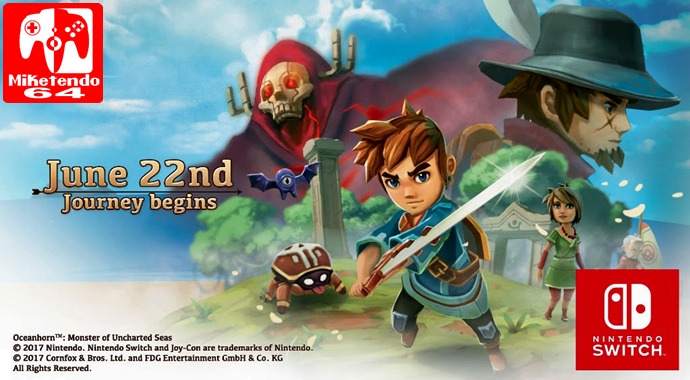 Get ready to not have to look at your phone for Nintendo news for the rest of the day because the best news has arrived! Oceanhorn finally has a release date for Nintendo Switch.

After revealing the 22nd of June Switch release date for Oceanhorn: Monster of Uncharted Seas, on Twitter, FDG Entertainment has since sent out the following press release and screenshots:

We’re overjoyed to announce ‘Oceanhorn – Monster of Uncharted Seas’ will sail to Nintendo Switch on June 22nd worldwide. It’s based on the remastered PC version with ultra graphics settings, running with steady 1080p/60fps in TV Mode and 720p/60fps in Handheld Mode! It’s the most beautiful and best version of ‘Oceanhorn.’

SET SAIL AND EMBARK ON AN EPIC JOURNEY:

Explore the islands of Uncharted Seas, a world filled with many dangers, puzzles and secrets. Fight monsters, learn to use magic and discover ancient treasures which will help you on your quest. Use all your wits and skill to unravel the mysteries of ancient kingdom Arcadia and sea monster Oceanhorn.

But that’s not all, for FDG Entertainment has also revealed there will be a demo, only it will not be releasing alongside the game. Instead it will come out later on down the line, so if you don’t buy the game this month, or even the next month, you will soon get the chance to try before you buy. But if you’re sold on it already, it will cost you a low sum of $14.99 US dollars and for that price, it’s a steal!