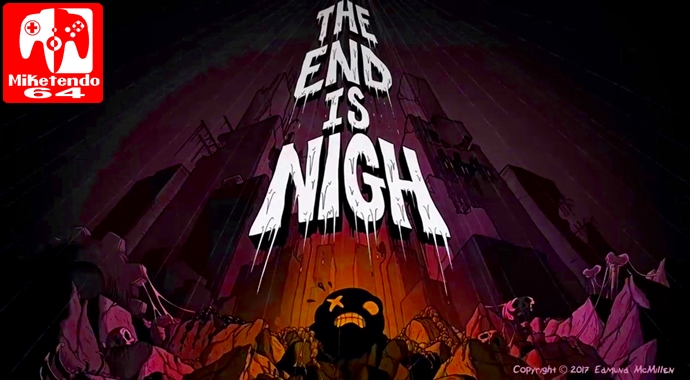 We’ve known for quite some time that the dev behind The Binding of Isaac and Super Meat Boy, (Edmund McMillen) is working on something for Nintendo Switch and today we got to find out what it is! I present to you The End is Nigh:

If the trailer above was enough to have you wanting to know a lot more about the game, than a lot more you should know as McMillen has shared the following information about his newest creation:

The End is Nigh!:

The End Is Nigh is a sprawling adventure platformer where the player takes control over Ash, one of few “things” that have “survived” the “end of the world.”

Follow Ash as he flops his way through a future of pain and suffering. Feel his stress levels rise as you throw him into an endless swarm of decaying, mutant animal-like creatures and help aid his final epic quest… to simply make a friend (out of pieces of people he finds along his journey).

Oh, also you collect video game cartridges and tumors! If that does anything for ya.

I’m extremely proud to announce that Tyler and I finally finished something! After months of working in secret I can now say that our game is called The End is Nigh and it will be releasing on Steam, July 12th (in 5 weeks!).

A little back story….:

In September of last year Tyler and I announced that we were working on a new game called 0uroboros, a platforming shooter with randomly generated environments. After a year of working on it, it felt 10% done. In order to avoid it becoming another mewgenics, we needed to figure out how to refocus it before it grows out of hand.

While working on 0uroboros we would take small breaks to prototype a few other ideas, but it wasn’t till December that we actually sat down and decided to do a full game jam and see what would come out. within a week what we had was a completely stripped down platformer with an adventure game “open” feel where the levels were all locked into tidy little boxes but attached in a way where they could be explored… it felt a bit like VVVVVV meets 1001 Spikes with a Spelunky control setup and it felt perfect.

Once again what started as a 2 week mini project sprawled into, by far, the largest game (level wise) I’ve ever worked on. I’m extremely proud of what we’ve accomplished with this game, it embodies aspects of basically every game I’ve ever created and I’m super excited to see what you guys think.

And now a little QA to clear up some frequently asked questions:

Q: Is this the Steven game?

A: Well it’s not 0urboros, but themes from it did bleed a great deal into it… you could say that in a way The End was a continuation of themes that I explored in Time Fcuk and 0uroboros… Steven is the glue that holds all my games together!

Q: So does this mean 0uroboros is dead?

A: Not at all! I’m positive 0uroboros will eventually see a release, we just need some time away from platforming for a bit.

Q: Why didn’t you announce this game sooner?

A: Because I have way too many projects that I’ve announced become vaporware shortly after announcing and I’m sick of it, from now on I’m only going to announce stuff a month or two before release.

Q: What happened to Bum-bo?

A: The Legend of Bum-bo is still very much in dev and scheduled to release this year in December.

Q: Are you working on any other projects currently?

A: No, just Bum-bo for the rest of the year (and I guess Isaac booster packs).

While this does conclude all The End is Nigh news for today, there will be plenty more in the coming weeks/months and when it does, we’ll be back to report on it.

Tags: Edmund McMillen, news, Nintendo Switch, The End is Nigh