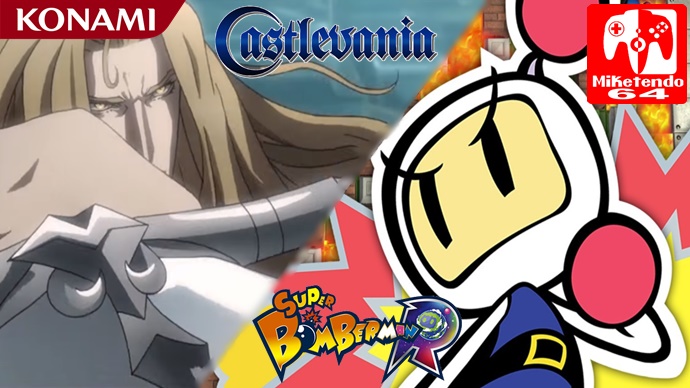 At Miketendo64, we are no strangers to conducting interviews and while many have been with smaller devs, there have been a few with larger devs and last month, we got to do an interview with Konami, via a conference call. During said call we got to talk with Richard Jones, a European Brand Manager will Konami and we discussed a range of topics from Super Bomberman R, to even Castlevania the Netflix series and fan interest in Castlevania Switch. While not everything we discussed can be shared, there are quite a few things we can, so without further ado, here are a few select statements from Konami’s Mr. Jones that we can make public:

“All I can say is that there is lots of internal discussions going on within Konami regarding what games we can bring to the Nintendo Switch, other than Bomberman, a game which we are well aware of its heritage and how loved it and Castlevania is. So much so that Castlevania is getting is getting its own show on Netflix and because of that, we’re hearing a lot of desires from our fans for a new Castlevania series. So we do know there is a demand for a new game, but right now nothing is set in stone as the discussions are still on going.”

Richard Jones on a Coin Revision for Super Bomberman R:

“As of right now, there are no plans to revise the coin system for Super Bomberman R, but the Bomberman team are open to ideas, so it is something we will consider, but they are currently working on other ideas first.”

“While I can’t say how long far we will continue to support Super Bmberman R, I can say we do have plenty of other ideas in the works and have a few big updates on the way. For example, while I can’t announce anything for the version 1.5 update, suffice to say there will be more stages and other things. But although I can’t confirm there will be more costumes/characters, there may or may not be some more later on down the line. We’ll just have to see how it goes.”

“As far as the current progress on version 1.4 goes, I can’t say what stage it is at, but I can say it is coming along nicely and we will be announcing something about it soon enough.”

Richard Jones on What he thinks of Super Bomberman R:

“Super Bomberman R is just such a great game to play. It’s got an entertaining story, will appeal to Bomberman fans and is just in general an all-round pleasant game.”

Richard Jones on Super Bomberman R Never Being Considered for the Wii U:

“The short answer is no. Super Bomberman R was only ever considered for the Nintendo Switch. We first learned of the console in 2015 and our dev team started to think up what game would have the most impact on it and before you knew it, we were settled on doing a Bomberman game and not long after Super Bomberman R was conceived and development properly began in 2016.

Plus by making the game exclusive to Nintendo’s new platform, it was a great way of renewing the series, whilst creating a new game that’s fun for all those who play it, which consists of both the classic Bomberman package that fans love, whilst supporting new designs.”

“As far as reaction goes, we were absolutely balled over by how well received Super Bomberman R was, back when it was first announced. It was far more than what we were expected. And then when it released the response was still overwhelmingly positive, so it’s definitely a game we do want to continue to support for the time being, but it is too soon to think about a sequel.

But going by the reactions received, it just goes to show Super Bomberman R was a game Bomberman fans were asking for and is just great to put out a game on Switch that Bomberman fans who first experienced the series as kids, can now play the game with their own kids.”

Richard Jones on a Message for Bomberman Series Fans:

“From all of us at Konami, we are truly pleased with the reception Super Bomberman R received and would like to say that we hope everyone who brought the game, enjoys it for what it is and as the game is the latest in a series that has brought fans the world over a lot of joy. Thank you all for your continued support.”

We hope you enjoyed this piece of extra special content and hope you look forwards to the rest of the stuff we’ve got coming. It’s not all Konami, but we have plenty of Nintendo Switch and Wii U news still to come!