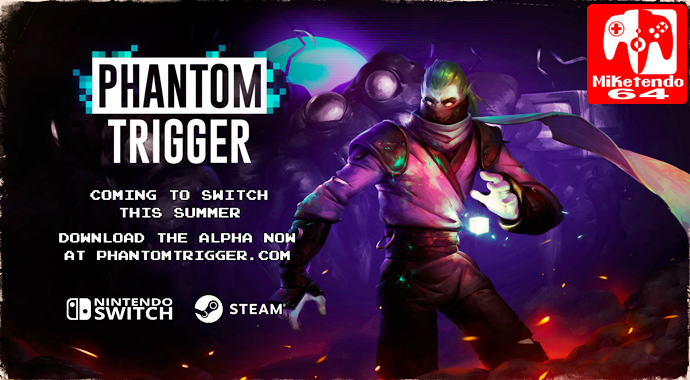 Guess what guys? Another game has just been added to the Switch’s line-up of Summer releasing games!

Having teased yesterday on Twitter that tinyBuild will be sharing some Switch news soon, the news is Phantom Trigger will also be getting the Switch treatment this year, only it’s not as big as a surprise as it could have been. Why not? Well it was previously unofficially stated by tinyBuild’s Alex Nichiporchik that Phantom Trigger will also come to Switch, but hey it’s a welcome addition nonetheless and you can see the game in action for both announced platforms right here:

But for gamers who are reading this and are still unsure what to make of the hardcore neon slasher upcoming Steam and Switch title, there is an alpha you can download, which will enable you to play the game. In order to download it though, you will need to visit the game’s official website, which can accessed with the link below:

However it is not the only alpha as there is a special alpha just for media, which consists of 2 instead of 5 worlds and you know what? The game is good. In fact, having played it myself, it comes across as being Blaster Master Zero meets Mr. Shifty goo and is most definitely going to keep players engaged a lot longer than a few games currently available on the Switch eShip. So as far as Phantom Trigger is concerned, it is certainly a game worth keeping an eye on and just as soon more news comes, we’ll be sure to share it!