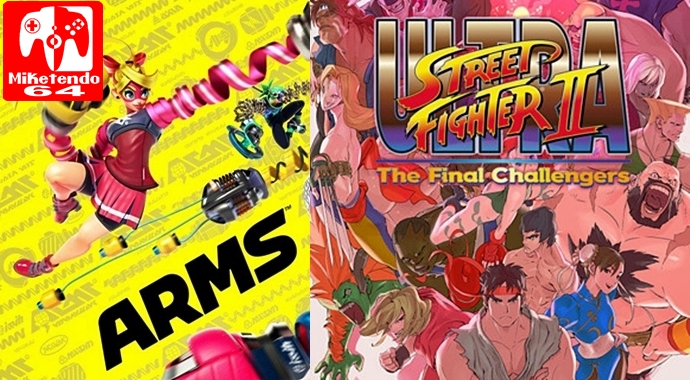 Here at miketendo64.com it is #StreetFighterWeek and such an occasion demands an original piece of Street Fighter content every day and today will be no exception!

Having only just released back in March, the Switch is the newest Nintendo console and it has truly taken the world by storm! In fact it is so in demand that every time Nintendo are able to produce enough units to ship, the new stock sells out in no time at all. (What do you know Nintendo, a steady release of 1st party games actually helps a console sell after all?) Speaking of new games though, within a month of each other, the Nintendo Switch one big game, but two and they’re both of the Fighting genre variety, but is it too much too soon?

I have nothing against fighting games, especially when they are a Smash game, a Street Fighter game, or even the bright, intriguing, bizarre and wonderful ARMS, but if the rumours of us getting the Smash Bros. port this year, are we getting too many fitting games in too small a time? I think it is, but Smash isn’t coming any time soon, so let’s just keep it about ARMS and Ultra Street Fighter. Unless you are a video game reviewer, in good contact with Nintendo or have the cash to spare, not every Switch gamer out there is going to be able to buy both games. It’s a sad truth, but it’s the truth nonetheless.

So essentially while some of you already have Ultra Street Fighter II: The Final Challengers on pre-order and awaiting pick-up this week, there are many more of you out there faced with the decision of “Do I buy the new Street Fighter game, or do I buy ARMS?” If you find yourself among them, then don’t worry because I’m about to make that decision for you a hell of a lot easier.

While Ultra Street Fighter II: The Final Challengers isn’t a terribly bad game, it is a game we have got time and time again over the last 30 years, which has yet again been repackaged, rebranded and had a couple of new features added to it. A game in which most Nintendo news sites have just shared unflattering reviews about and costs a little more than it is actually worth. ARMS on the other hand is something entirely different.

ARMS is quintessentially the Splatoon of 2017. Sure we have Splatoon 2 releasing this Summer, but just like 2015’s Splatoon was Nintendo’s take on revamping the Shooter genre, ARMS is Nintendo’s take on the Fighting genre and going by visuals alone, it is the fighting fames fans have been crying out for! It is fresh, it is new, diverse and a lot of thought has been put into it and it shows. It’s also a game that will be getting free updates, which will add new stages, characters and “accessories.”

Admittedly it costs more, but in the long run, ARMS is certainly a game that will have players keep coming back to and something they will play with a friend on many different occasions, which is something I can’t say for certain with regards to Ultra Street Fighter. It is a good game and while it isn’t necessary to be a fan of the Street Fighter series, but it is a game for the fans. It is supposed to appeal to the Switch masses, but at heart it is a fan game and there is no changing that.

While these two games are not necessarily meant to act as competition to the other, the fact of the matter is they are and they both have somewhat atrocious motion controls and while Ultra Street Fighter II: The Final Challengers does have its strengths, the fact of the matter is ARMS is a much tougher contender. I know Ryu has been through a lot over the years, but he has never faced characters like Ribbon Girl and Twintelle. Sure he’s muscular and has a fanbase, but I’m sorry I’m pro ARMS and so are a lot of writers working for/with Nintendo news sites and come this weekend you guys will be too!

But then, Ultra Street Fighter never really did stand a chance did it? Sure we knew about the game and its release for months, but with the ARMS Global Testpunch demo kicking off in the very same week that the new Street Fighter game releases, you just know that those who brought the latter, will be putting it on hold as they engage in the former. ARMS has successfully stolen Street Fighter’s wind from beneath its wings and neither one is even out yet!

Then again, it doesn’t really matter as history is about to repeat itself for Ultra Street Fighter is Super Bomberman R and ARMS is The Legend of Zelda: Breath of the Wild. Get ready to be blown away for the second time this year, because that time comes next month and ARMS is not pulling its punches! But if you think I’m wrong, you’re more than welcome to say such a thing in the comments below, so have at it! I dare you.