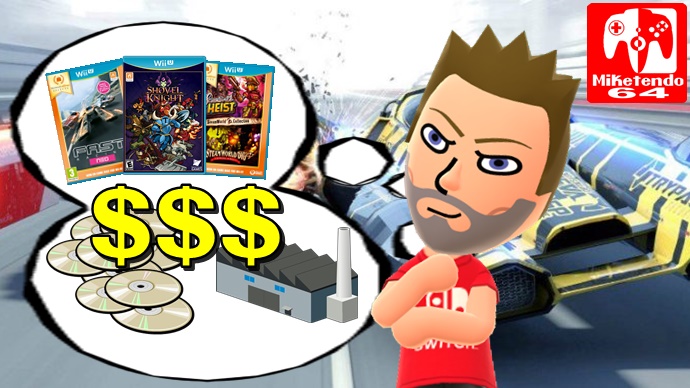 Given the popularity of our recent amiibo article that exposes some of the goings on when it comes to making amiibos a reality, here at Miketendo64, we’ve decided we’re going to run another article of the like, except this time, we’re tackling physical Nintendo games!

For some odd reason, physical versions of Switch games are being revealed as costing quite the substantial amount, but why is this? Well that’s what we’re going to tell you. Having been able to get our hands on some classified documentation and exchanging a few words with “new reliable friends” we can tell you today that the price publishers and even developers, have to pay for physical Switch games is around $8 US dollars per unit (unit in this case being both the cartridge and the box, and that’s not including the rest of the costs involved such as licencing fees. As for a 32GB Switch cart, well that’s where things get really pricey as it costs more than twice as much of the $8 dollars for the basic cart.)

Whereas for PlayStation4 it’s more a case of $5 dollars, but again there is a lot more to it than just that. But just like with amiibo, there is a minimum number of units the publisher/developer is required to purchase and that figure is a minimum of 6,000, which means at $8 bucks a pop, they’re looking at $48,000 just to get the ball rolling, which is more costly than amiibo (at $0.30 cents a NFC tag and a minimum of 100,000 tags required, the initial amiibo investment is $30,000 dollars, no discount.)

What makes it worse though is those 6,000 units are just for one region, so were the dev hoping to bring the game to both North America and Europe, they then have to pay another $48,000 or more, due to how strong or weak the Euro is at the time. But even then that’s not everything because there are special guidelines that need to be passed, QA checks and the signing of a Distribution of Physical Goods form, which does differ to the form for Distribution of Digital Goods. Then there’s also the fact that there is a lot less revenue in it for those involved compared to selling digital only games, due to the costs of manufacturing and distribution, which means the games do need to be sold at a higher price, just to ensure everyone involved with the physical release profits and while this does conclude our physical Switch games coverage, this article is still just getting started.

Sure I could have made it all about the Switch, but we’ve also got similar details for physical Wii, 3DS and Wii U games, so that’s what we’re going to tackle next, starting with the Wii. Granted it’s a popular console from long ago, but since most of these numbers never saw the light of day, this is us sharing them. First and foremost, the price devs/publishers would have to pay per unit, actually varies on the wholesale price the game would sell for, so if the game was going to be sold anywhere between $0 and $23.99 US dollars, the dev/publisher would have to pay $5.50 dollars and they would have to be paid in a bulk quantity of 3,000 minimum and if the game sold well and they wanted to reorder more, the minimum is 1,200 units. But because we don’t want to confuse you by covering every price in the body of this paragraph, we’ll be sharing the numbers below in a simpler way for you to view:

Bulk Pricing of Single Layer Discs per each Disc:

Bulk Pricing of Dual Layer Discs per each Disc:

Bulk Pricing of Single Layer Demo Discs per each Disc:

Demo Disc Payment Terms: A payment of wire transfer for the amount of goods plus the $450.00 initial stamper fee must be paid at the time of ordering.

I do hope all these numbers haven’t given you a headache just yet, because although this does conclude our Wii numbers we still have 3DS and Wii U to share and you can expect to see their numbers shared in a similar fashion to that shown above and with us saving the Wii U till last, here’s us sharing a whole ton of 3DS details!

Also once again, that 6,000 pieces is per region, so once again, should the developer/publisher wish to sell the physical version of their game in another region, they have to buy another 6,000 pieces/units to do so and now, here’s those Wii U numbers!

Bulk Pricing  of Single Layer Bulk Discs per each Disc:

Initial Order Minimum: 6,000 (quantity over the order minimum must be divisible by 600)

Reorder Minimum: 1,200 (quantity over the order minimum must be divisible by 600)

For those of you who have spent so long wondering why they’re favourite indie games didn’t see a physical release, you can wonder no more as the numbers above say it all. As nice as it is to own our favourite games in physical form, the reality is it’s just not all that feasible, because there is more to the process then we realise and the numbers above are just the initial payment, as the pursuit for physical games can also be a huge money pit and unless the fans are willing to cough up the dough and buy out every copy, as nice as physical is, it isn’t actually something that is in the best interests of the developers and publishers who choose to make a physical release a reality. Thank you for making it to the end of the article, we hope you enjoyed it and aim to bring you more unique content like this whenever possible.