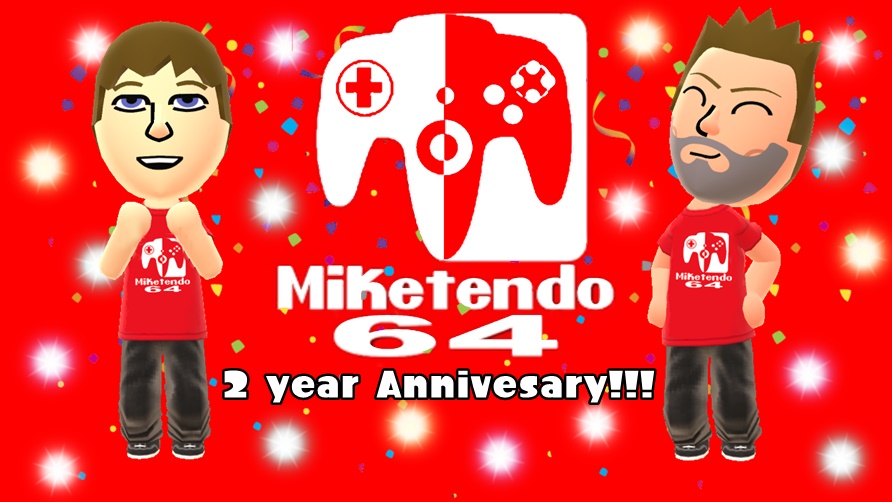 If you are reading this, then it can only mean one thing, it is the 5th of May, 2017, which is the very same day Miketendo64 celebrates its 2nd anniversary/birthday.

When Miketendo64 first come to life on the 5th of May, 2015, it was not the same site that it is now. It was merely two brothers with a little something to say, who united over a common course, as a means of sharing more direct Nintendo news, especially any and all news pertaining to The Legend of Zelda: Breath of the Wild.

Instead of professionalism, we favoured personality and while our articles showed off our personality in part, our videos did it in more so, yet no matter what we did, by the time our 1st anniversary arrived, despite some levels of success, we were still very much so a small site with no connections whatsoever. So when Year 2 of Miketendo64 did come around, new changes were going to be implemented, firstly we expanded the team and this guy, Jack Longman, aka he who for the last year, worked his fingers to the bone trying to ensure the site had plenty of content every month, which included reviews, features and interviews as well as just news, was made up to be the Editor-in-Chief and because of the role and power I was giving, I made a ton of changes.

I ensured we had more content, (both news and original,) started building relationships with whoever I can and did what I could to get the Miketendo64 name out there and you know what, I think I did a pretty good job. When year one ended, our total views was less than 40,000 in the first year, whereas now it’s 347,841 views in the last two years, which is a huge boost by our standards as mathematically it works out to be (on average) 25,000+ views a month every month for Year 2 of Miketendo64 and for a number of video gaming press events around the globe, 25,000 views a month is the magic number for press admission.

Sure there are sites out there who get that number of views a month, but they’re not us and for the last year, we haven’t been us either. We traded personality for professionalism and while it served us well as we now have press access to tons of exclusive press sites, including the Nintendo and Pokémon ones, we are now talking with the likes of Warner Bros. and Konami, who last month alone sent us a game each. (One digital copy of LEGO City Undercover courtesy of Warner Bros. and one promotional copy of Super Bomberman R that was sent all the way from the United States of America.) But more than that, we actually shared a ton of our own Switch news before anyone else did and yeah our views could be higher and we could have more of a following than we do now, but we’re actually at a good place.

For the last two years, Miketendo64 has been the means of getting our voice out there on the net, to try and simplify it by putting it into one consist ant place, as opposed to taking one bit of news and making it become 5-10 different articles like some very popular news sites do. But this year, whilst building on the success of Year 2 of Miketendo64, we want to make our site your site. We want to interact with all of you more. We want to get you more involved and encourage you to submit whatever you want to us, be if a story, an image, an illustration or even a review/article you have written yourself. Heck, we’ll even cover your fan projects!

We will still be the Nintendo news site we have been for the last year, but we’ll be an even better one as we are now only going to cover the stuff you really need to know about, whereas the more meagre and smaller stuff will find themselves being shared via tweets and posts via our Twitter account and Facebook page. Plus this sort of thing will actually free us up to be able to focus on all of you more, building a better relationship with you, but also it will enable us to provide even more original content and this year, that is an absolute must!

So because things are changing, and I am the Editor-in-Chief for Miketendo64 for another year, here is a break-down of a few of the things you can expect from Year 3 of Miketendo64:

*More Content: Same thing we spent the last year doing, except now we’re making it a little more personal, fun and instead of writing full articles on unnecessary pivotal news, we’re just going to Tweet and Facebook post that kind of news instead, as this will enable us to focus on more important and original content. So expect plenty more Guides, Let’s Talk About articles and random Editorials, plus all the usual Interviews and Reviews!

*More Videos: It’s no secret we haven’t done a proper Miketendo Direct video but don’t worry, we’re going to change that by bringing them back and trying to make them better than ever. (At least that’s the plan.)

*More Giveaways and More Fan Focus: There is really nothing quite like getting a free game, so given how well our giveaways have gone down in the past, you can expect plenty more of them in the year to come, as well as fan interaction. Like I said earlier on in this editorial, this year our main focus is interacting with all of you, our loyal readers and potential new followers, whilst also doing everything we can to help you get your voice out there, as well as all of your Nintendo related creations and desires.

*More Theme Weeks: We love our Theme Weeks and so do you guys, so for that reason along, we will be hosting another Theme Week later on this month and it is #StreetFighterWeek. Only don’t go expecting to get details about the week long event as we’re still hashing out all of the details, but once we’ve got a plan and have it in motion, we will be sharing it with all of you, so please be sure to stay tuned for that.

Miketendo64 is evolving and we’re inviting you to evolve with us, so we hope you will join us as we shape it into something completely different but before I end this here, I just want to say a huge “Thank You” to everyone who ever interacted with us and supported us. It is because of You that Miketendo64 has lasted this long and with you, it will last even longer, so let’s get Year 3 underway for Year 2 is well and truly over!