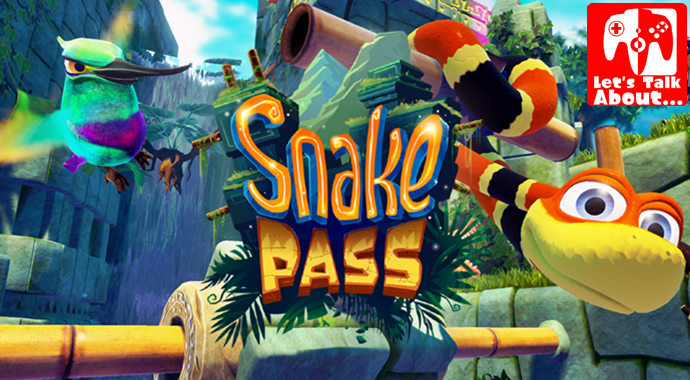 Hello to you all, I am Jack Longman, and this is yet another written instalment of Let’s Talk About, the Miketendo64 feature series, where Mike Scorpio and myself express our views and opinions on all things Nintendo! Be it a singular game, a game series in general, consoles or even Nintendo’s latest activities, you can count on us to cover it in Let’s Talk About!

Being as though this is a written instalment, it does of course mean that its bye-bye Mike & Jack Discussion and hello full-on Editorial/Monologue, by yours truly and in today’s piece, it’s original, complexing and the indie game I just can’t get enough of! Let’s Talk About Snake Pass!

I’ll be honest, it does seem a little odd that I would allow Snake Pass to have a Let’s Talk About instalment of its own, since they are typically very Nintendo focused, but while Snake Pass itself is not Nintendo’s own IP, or even a title exclusive to Nintendo platform, it is still playable on Switch and is by far my second favourite game playable on said console. So for those reasons, I do in fact deem Snake Pass worthy of being the subject of the latest Let’s Talk About instalment.

Now I’m not sure how many of you have been keeping an eye on the @Miketendo64 Twitter account lately, but for those of you who have, you’ll have seen just how actively I have been showcasing my Snake Pass love and you may have even read said love during my Snake Pass review, so while you might think I have said everything I possibly could about the game, I really haven’t and that is the purpose of today’s piece.

Not only do I love Snake Pass to the extent that I do, to me it is a game that just speaks volumes directly to my very core and speaks to me in a way Breath of the Wild doesn’t. (Don’t get me wrong, I simply adore Breath of the Wild. Sure there are a few things about the game I don’t like about it, such as the story, but it is truly a breathtakingly beautiful game, but it does not communicate with me in the way that Snake Pass does.) I have not felt this strongly about a game since Ocarina of Time! Ocarina was truly exceptional, original and an instant classic and that is exactly what Snake Pass is. Yes the controls aren’t as great as they could have been and the camera could be terrible at times, but so what? Those things only add to the experience and challenge the player to do better and other than story, it is exactly the sort of thing I want from a video game. I want to be challenged. To be pushed and forced to think differently and in Snake Pass’ case, thinking differently, is thinking like a snake!

I am truly overcome by the cleverness of this title and in awe of the world of Haven Tor, even if the Switch version’s graphics are bad in comparison to PlayStation 4, so what? Graphics are not everything and Snake Pass is perfect exactly as it is, especially when the Switch version can allow you to play it anywhere and at any time you wish and that is something the PlayStation 4 version can’t do.

Regardless of which platform you play it on though, Snake Pass is an absolute gem and one I can see myself playing over and over again, especially since my first experience playing the game was with a friend and the two of us spent the first couple of minutes playing about with Doodle’s facial expressions, which was followed by hours of more laughter as we actually played the game and took soon swapped, whenever acquiring a certain Wisp or Gatekeeper Coin proved too much for the one playing. But the friend I was playing with, we don’t see eye to eye much on videogames, so to be able to have a game like Snake Pass and have that experience that we did, it’s something neither one of us is going to forget about anytime soon.

So yes, I love Snake Pass, I see it as being on the same level of Ocarina of Time and there is nothing more that I want than to see the world of Snake Pass expanded upon. I’m not demanding an immediate sequel as I feel a “too soon” would only undo the great work that went into the first one, but I would like to see a sequel done at some point. With the open end that is has, the stage is set for a continuation, so one feels as if it is bound to happen at some point, but were it to be the case, some changes will need to be put into effect. Changes implemented with the purpose of adding to the cleverness we have seen already, instead of undoing it. Changes such as less bamboo climbs and incorporating climbable that Noodle can slither up and vines he can wrap himself around. While this may be something of a small change, it is an evolution that will add to the experience, much like enabling Noodle to expand on his Snake Powers.

Upon completion of Snake Pass, Noodle can learn Snake Pass, a useful function that can enable him to see the Coins and Wisps players missed the first time round and since he can already learn that technique, why not let him learn more in the sequel? Make Snake Vision a skill he can unlock at the end of the game like with Snake Pass 1, but allow him to learn how to spit venom like a Cobra. Such a technique could be used as an acid to expose secret paths and hit switches and targets that are beyond reach. Or go really crazy and make Doodle do the majority of the work, with Noodle helping out as and when he feels like it. But then it wouldn’t even have to be a sequel.

One of my most favourite things about Snake Pass is the unlockable skins players can get if they get all Gatekeeper Coins and Wisp, skins such as 8-bit Noodle and Doodle. The 8-bit designs look so great in fact I would love to see some 8-bit levels, or even a full-on 8-bit game but if I’m honest, 8-bit Snake Pass would be better off happening as Retro levels added to Snake Pass as dlc. Free would of course be warmly welcomed, but even if we had to pay for it, being as though I am not the only one who loves it tot eh extent that I do, many of us would gladly pay  for more Noodle and Doodle action. But just in case Retro levels aren’t enough of an incentive, the dlc could also include more skins for the interesting duo.

I honestly don’t care how the next helping of Noodle and Doodle comes, all I know is I need another bite. I need dlc, a sequel or even just retail release of the game we have now, but Snake Pass has gotten under my skin and I am simply hooked. The world deserves more Snake Pass and I sincerely hope Sumo Digital harbour plans to give the likes of me and all the rest who feel the same way I do about Snake Pass, and expand on their marvellous creation. After all, as far as Snake Pass is concerned, the possibilities are endless, as is the fun!

While this does indeed conclude today’s instalment of Let’s Talk About, it does not mean this is the last you’ll see of our beloved ongoing feature series, as there is always something else to talk. But if you have something in particular you would like us to bring up and discuss in a written or vocal (podcast version of Let’s Talk About) instalment, be sure to state your case in the comments. After all, we are a Nintendo news site that listens to and values our readers and their opinions. So until then, keep on gaming!