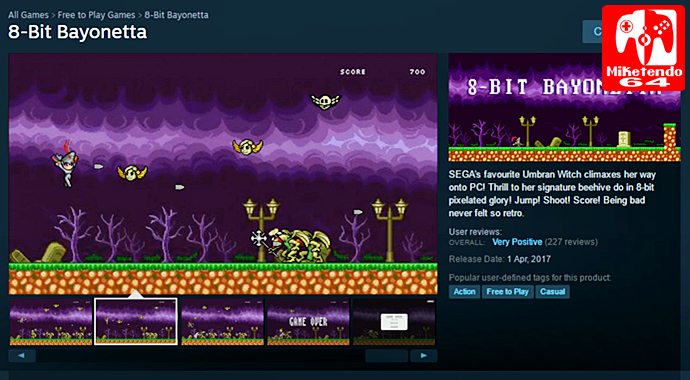 The April Fool’s hijinks continue and this time, we’re covering one that comes straight from SEGA.

Now available on Steam, is the latest instalment in the Bayonetta series, 8-Bit Bayonetta! If you were of the mind-set that Bayonetta’s intense and delightful visuals didn’t belong in a Bayonetta game, then maybe you’ll enjoy this non-full on 8-bit alternative, where there are only two kinds of enemies to kick and gameplay mostly consists of going nowhere, as you constantly swap between jumping and shooting.

Granted more could have gone into the game’s fabrication, but I do like how SEGA went all out with the likes of reviews, achievements, and even providing the following description:

But the most interesting thing about all of it, is the fact that the page for the game has a certain link to a SEGA webpage that features a countdown. What it is counting down to no one knows. What we do know however is the countdown reaches zero on the 11th of April, 2017 at 12:00 p.m. CEST. But the question becomes is there a very special announcement on its way, or is this all part of an even bigger and elaborate joke that SEGA has in store for us?

I’ll guess we’ll just have to wait until the 11th to find out. How exciting!