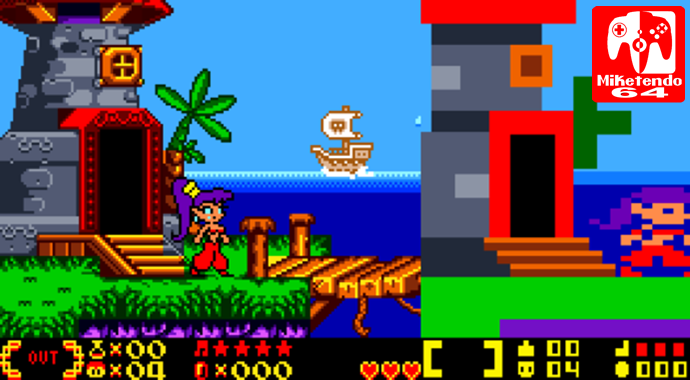 April Fool’s continues and finding itself the focus of this article, is a “remaster” we’ve always wanted, a reimagining of the first Shantae game!

Only I won’t have to use my own words to tell you all about it, as WayForward have gone all out with the announcement that they’ve even sent out a press release for the mock title and you can see it all right here:

Play the original SHANTAE in a whole new way:

Valencia, Calif. – 04/01/2017 — We are thrilled today to announce the re-imagining of a WayForward classic: Shantae: Demakeified!

First released on the Game Boy Color in 2002, the original Shantae game sold over 8,000 copies and spawned a generation of diehard fans, as well as several sequel products: Shantae: Risky’s Revenge, Shantae and the Pirate’s Curse, and the just-released Shantae: Half-Genie Hero (all available now on PC Steam and consoles).

But fans have been asking – nay, BEGGING – WayForward to recreate Shantae’s first adventure for modern gaming systems. Well today, we answer that beg! WayForward has a rich history of recreating classic games with updated visuals, audio, and storytelling. But let’s face it, remakes and remasters are so 2016. What the kids love these days is DE-MAKES!

Shantae: Demakeified! is a painstaking recreation of the 2002 Game Boy Color game, with all-new reduced visuals, removed animation frames, and compressed audio! It includes most of the game’s original levels, plus no new content (because we couldn’t fit much on the cart). Gameplay has been redesigned to work with a single-button input, adding a whole new layer of challenge to jumping, attacking, or just walking around.

And for people who are “so over” de-makes, there’s a special unlockable mode: Shantae De-Demakeified! Stare with befuddlement at randomly-colored squares that slide around onscreen and might possibly represent characters. Struggle to figure out basic mobility, just like Grand-Dad did back in 1982. More retro equals more fun!

Shantae: Demakeified! is available Fall 2017 on all consoles with an RF output. For more information on this title and all WayForward games, head to http://www.WayForward.com.

The whole “available Fall 2017” is a nice touch, nothing screams April Fool’s louder than that and with the day still not over, we can expect another hijinks or two! Have you got a favourite joke news article that broke today? Let us know!