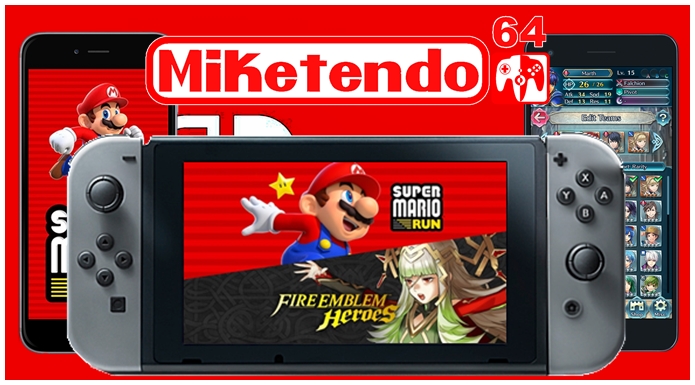 [Editorial] Should Nintendo bring their Mobile Titles to the Nintendo Switch?

Welcome to another Miketendo64 editorial and coming up on today’s piece, I’ll be arguing the Pros and Cons of Nintendo bringing their mobile titles to Nintendo Switch.

Now straight away a few of you may be thinking “why would they want to?” and you would be right to do so. I adore Super Mario Run and I even enjoy Fire Emblem Heroes and while they are a great mobile representation of the videogame series’ they represent, its a whole different ballgame if they were playable on one of Nintendo’s available home consoles. But then again, whilst they may not be the best representation, they would still act as great introduction titles for gamers who have never played a single Mario/Fire Emblem game. Titles that could get new to Nintendo/Switch owners interested in buying Super Mario Odyssey, Fire Emblem Warriors, Fire Emblem Switch and even the Mario/Rabbids game we’ve been hearing Ubisoft are working on.

Furthermore gameplay wouldn’t have to be adapted too much as the Switch is in fact much like a tablet, so players could rotate the console and hold it in portrait mode, much like they would with their phone or tablet when playing one of Nintendo’s mobile apps, resulting in the games being playable exactly as they are when played on a mobile device. Also as well as being a tablet-like console, Switch is also a mobile title and Nintendo’s have said time and time again, the Switch is to go hand-in-hand with their mobile games, so this would be one sure way to prove it. Plus the games could literally remain as they are in terms of being free to download, but support in-app purchases.

Plus there’s the fact that both Switch and the Nintendo mobile games support/sync to a Nintendo Account (aka My Nintendo), so not only do they work a similar way, but were the games able to be brought to the console, players could easily carry their save game over and pick up where they left off, but while this does make sense and something Nintendo should consider doing (especially since Super Mario Run is actually trademarked for Switch in Japan), it is rather doubtful Nintendo would actually put it into effect.

Why? Well it’s because Nintendo wants everyone to try out these games, to see if they adore these exquisite IPs that can’t be played on any other console than Nintendo’s own and try to get them to buy some Nintendo hardware such as a 3DS or a Switch. So while you could argue brining the mobile games to the console would help make these mobile games reach more gamers, it would only bring it to such a limited audience of new to Nintendo gamers, so in Nintendo’s eyes it might not be worth the effort and yet it could still happen. Time and time again Nintendo have released games that have remained exclusively available in Japan and should the likes of Miitomo, Heroes and Run come to Switch, I get the feeling they would “solely be exclusively” available via the Japanese eShop.

However, while the mobile titles would actually be a good fit for Switch and something I would happily like to see put into effect, at the end of the day, they are games for smartphone devices and while they could work on Nintendo’s latest console, they are better off where they are now, even if having them on smartphones and Switch could help boost interest in the Super Mario and Fire Emblem series’ even further, but what do you think? Should Nintendo bring their mobile titles to Switch, or leave them exactly where they are? Let us know!