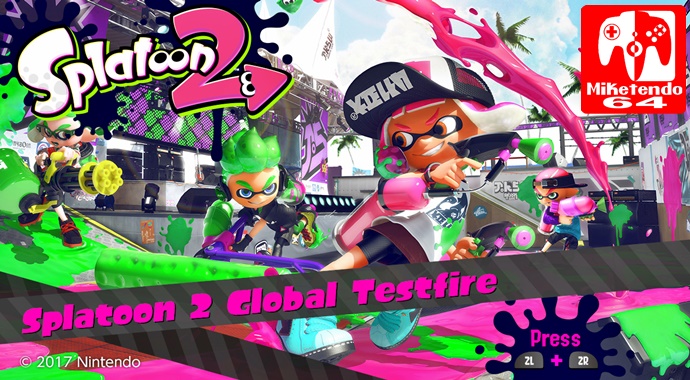 It is Friday the 24th of March and the Splatoon 2 Global Testfire is now underway, but with the first event over, it’s time to sit back, take stock of the event and air some first impressions of colourful sequel.

So what do I think of Splatoon 2 after having played it for nearly an hour? Well, I like it, the opening tutorial features clear instructions and smooth gameplay, but that smooth gameplay soon dissipated when I tried my hand engaging in Turf Wars. Granted that could have been down to my own internet connection, but being as so others were also experiencing issues similar to myself, it’s doubtful.

Still I’d rather take non-fluid gameplay over connectivity issues, which is something else I encountered and had to deal with for 10 minutes before being able to find a match but at least the actual Turf Wars were enjoyable enough. From the game’s visual, to the weapons and music, Splatoon 2 is very Splatoon, and maybe a little too Splatoon and not enough Splatoon 2.

Having just read that, you might be wondering just what exactly it is I mean, well here it is another way. If this testfire is the best possible representation Nintendo could have chosen for Splatoon 2 than they picked a representation that feels more like a Mario Kart 8 Deluxe styled port as opposed to full on sequel, but then, why should it feel like a sequel?

Just because we were able to play one new stage (Musselforge Fitness,) and one old one, we didn’t exactly get to view the new hub world and get a proper glimpse at what makes this game a true sequel. So of course it would feel like a slightly sharper and tighter port as opposed to a sequel because the testfire, but it was still highly enjoyable nonetheless, even though the controls felt buggy and could have been better.

But Splatoon 2? It’s not bad at all and having tried out all weapon sets, the Splat Dualies is the better main and Inkjet is the best Special available, so I’m certainly looking forwards to seeing the title release later on this year, However since that won’t be for a long time yet, it only makes sense to partake in the testfire even more so over the course of the weekend. But since you did sit there and hear my thoughts, it’s time to reward you with a ton of Splatoon 2 testfire screenshots.