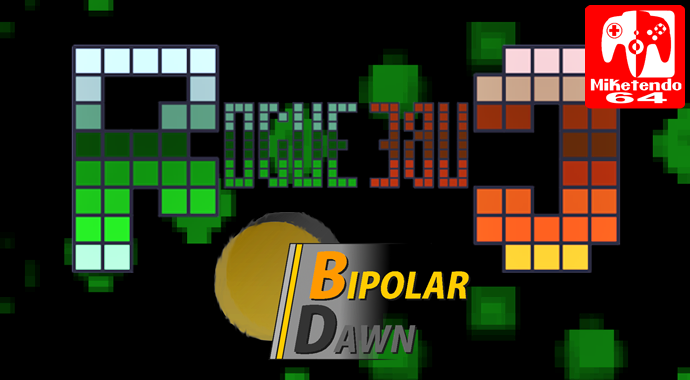 As part of an all-new regular feature for Miketendo64, we will now be hosting an Indie Dev Spotlight segment, which will see us inviting indie game developers to talk about their game on our website, in a bid of getting more attention for their creations. So to kick off the series, here’s Bipolar Dawn Studio talking about their upcoming RogueCube:

“RogueCube is a top-down shooter where cubes assassinate cubes. Basically, that’s our pitch.

We have made a rogue-like game where all the elements have been reduced to their very primal essence and, by rebuilding on our own all the parts, our goal is to differentiate RogueCube from the other rogue-like shooters on the frontline, such as Nuclear Throne, Enter the Gungeon, etc.

Let us first explain how the game plays. The main goal is to advance level to level until you reach the final boss and, of course, you defeat him.

The idea is that you are inside the C.U.B.E. System: a sort of PC program that has been attacked by an evil being. Starting from the only safe place on the system, you will go through randomly generated rooms full of enemies and challenges, looking for that evil oppressor. And he expects you coming, so the journey won’t be easy. On your way, you will be able to face up to six challenging bosses, participate in rescue missions, find new weapons and learn new amazing abilities. Every run will give you experience, objects and money to help the villagers on the Lobby to have a peaceful life again.”

At what Stage in Development is it currently at?

“And now the great question: ‘When are you releasing?’

Currently we are still in development, close to the finish line. Our very first intention was to let RogueCube flow smoothly at any pace or way of playing, and achieve a nice game feel. This is something that, according to our feedback on game conventions, we have accomplished.

So from now to release date, we will exclusively be working on implementing the seven bosses, some new weapons and levels, and polishing things. Having in mind that we both are university students, this will take until summer 2017, when we plan to release on Steam.”

As far as RogueCube goes, do you have any Intended Platforms in mind are any Confirmed?

“And now that we talk about platforms, let us say that we will be launching a Green Light campaign by the end of March, with the objective to release on PC -we are working on Mac too, but it’s not confirmed yet. And after having released on PC, our intention is to take RogueCube to 3DS and Nintendo Switch, since we think the game fits perfectly on the great hardware which Nintendo has developed.”

Lastly, where does RogueCube’s Inspiration comes From?

“As I have mentioned, we want to differ from the typical formula, and you may have noticed some strange elements for the well-known “standard rogue-like”. The reason is that RogueCube was expected to be an RPG at the very beginning: the inspiration came from the Pokémon Mystery Dungeon series. This makes more sense, doesn’t it? The lobby -inspired by the PMM town-, one-to-one boss fights, passive abilities and objects, levelling up and money… We thought we could take profit of all these mechanics and turn a game that we love into our own version of a shooter. Definitely, this gives RogueCube a unique feel and personality.”

For any of our readers who would like to keep up to date on RogueCube (hopefully for 3DS,) you can do so by regularly visiting Bipolar Dawn Studios’ website as often as you would like, or by regularly checking in on them over on Twitter. Whatever you decide though, these are the links you’ll want to use:

Now should you yourself be an indie dev reading this, then we would be more than happy to extend you the same courtesy we gave Bipolar Dawn, by giving you guys some well needed coverage, but there are some rules. For your game to be featured on our site, we do require it to either draw inspiration from one of Nintendo’s own IP (Intellectual Property), or at the very least have a Nintendo release platform confirmed.

*While we would prefer the game to already have a Nintendo platform already confirmed, we will also offer coverage to those that have a 3DS, Switch and even a Wii U release in mind, as long as we like the concept of your game.

If you feel your game fits the bill, (and meets our rules) feel free to send an email to miketendo64@gmail.com and we will reply the second we see it in our inbox and see to it your game and you yourselves get the coverage you deserve. And just in case you’re not a dev, but one of our readers, then we hope this new series will introduce you to a game you would very much so be interested in.