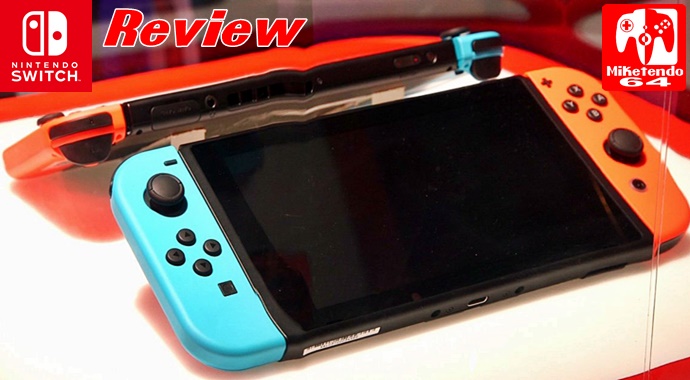 We thank you Nintendo for this gift we have received!

Saturu Iwata, may he rest in peace, had a dream and that dream was the Nintendo Switch. A console that could offer the home console experience, but can be played anywhere, at any time, with anyone, for any reason and that dream has become a reality! A reality that is in the hands of many of our readers and gamers across the globe, but with many without the console, wondering if it is any good and lives up to the hype, then this review is for you.

In terms of power, the Switch compared to its competition is lacking big time, but it was never meant to be a console that could go toe to toe with its competition, it was meant to be a home console that doesn’t have to compete whatsoever as it is something entirely new and just because it’s power is bad in comparison, the way it works isn’t. With a NVIDIA Custom Tegra processor, it works rather well and has a very smooth and user friendly interface that really makes the whole setting up process go a lot quickly. And general use isn’t bad either (accessing the eShop, your profile for your account, etc.)

Now purely because I don’t want to be throwing out technical jargon and details throughout the review, I’m just going to highlight some of the specs now so I don’t have to later on and cause you any unnecessary confusion:

And now we can get back to talking about the Switch. If you have never actually gone hands on with one, when you see one for yourself, you are in for a shock, because when you open that box and you see everything separated, the Joy-Con controllers look tiny, with miniscule buttons and the actual Switch itself doesn’t look all that big either, but it soon grows in size when you put it together and because it is something that is put together, if you shake it a little too hard, it does feel like it could come easily apart, so be careful when handling it.

Aside from it feeling a bit flimsy and being something of a money pit as the box and its contents, as nicely packaged as it all is, there is a lot missing from it, things like a wired LAN adapter. A game bundled with it so you immediately after you’ve set it up without having to buy anything to go with it. Or even a Joy-Con Grip that actually charges the Joy-Con’s when they’re in it, as opposed to one that doesn’t come with the Switch, but doesn’t charge the Joy-Con.

Then of course there’s the games themselves that are another huge cost, but you know what, after playing Breath of the Wild for many hours, in almost every room in my house, trying out each style, some of the games are worth the price we have to pay. Plus there is just something so very odd yet liberating about being able to play however you would like. Want to play tabletop mode? You can. Want to play TV mode? You can. Want to play with just the Joy-Con? You can and you can even play with a Pro Controller and with the actual Switch itself and that’s probably what I do like most about it.

It is a home console that can be played however you want it to. Sure it costs a lot and will continue to cost a lot, but it is nothing like other handhelds on home consoles available in today’s market. Switch may not be the greatest home console in the world, but it far exceeds all handhelds, including mobile phones and tablets. It really raises the bar in that aspect and I’m interested in seeing how Nintendo handle a successor with regards to the 3DS, since the Switch has shown off what a handheld can be and for Nintendo to come out with anything less, would be a shame,

However as a home console, I can’t give it the same praise, to me it just feels like a slightly improved Wii U with a different UI, due to having a similar play experience, just more freedom with said experience. So if you’re a Wii U lover, you will love the Switch, but if you hate the Wii, then there is a pretty good chance you will hate the Nintendo Switch as well. Sure it is great as a home console and certainly different to almost everything available in today’s market, but not by much. Still it does handle brilliantly, it’s very smooth and customising your Mii is the best it has ever been! (Purely because there are now more available customisations.)

There’s also no Nintendo Network ID needed for it, as Switch uses a Nintendo Account (used for My Nintendo) and it works in pretty much the same way. As for adding friends, it’s easy to do and there are a few ways to do it, including adding people to be your friends, whom you are already linked with on Fire Emblem Heroes, Miitomo and Super Mario Run. And taking screenshots has never been easier, as it really is just a simple case of pressing a button and playing games on it sure is a lot of fun, especially Zelda.

But now I’m torn, because after all the hours I have put into it, including using and playing different games on it, I feel as if I am as ready as I am ever going to be to reveal my finished score on it, but that score is conflicting. As a handheld, the Switch deserves a Perfect 10/10 but as a home console, it only just has an edge on the Wii U, resulting in a deserved 9/10. It is not the greatest console ever and nor is it the best Nintendo console, but it is second and if you never owned a Wii U, then buy a Switch because it is the console the Wii U was almost meant to be, just remember you will need quite a bit of cash just to buy all of the necessary accessories and required games,