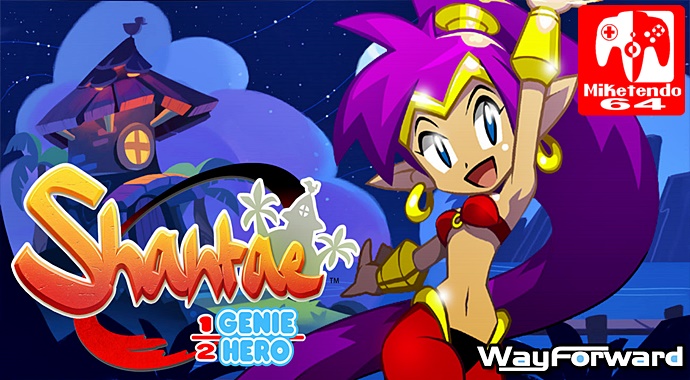 Good news Shantae fans and Wii U owners. If you own Shantae: Half Genie Hero and were looking for a good reason to play it again, because you won’t be getting Breath of the Wild any time soon, we have that reason!

Provided you own Shantae: Half-Genie Hero by WayForward, you can of course play the title once more a new update is rolling out next week (the 6th of March) and it’s a rather challenging yet delightful one as it brings with is a feature we wasn’t expecting, Hard Core mode. Below you can find the official description/Kickstater update regarding the new mode, the update, bug fixes and a Switch related tease.

Hi Backers! In our last update we mentioned that a fun surprise was on the way. We know it’s difficult to wait for Risky Boots and other DLC characters to arrive. And while we’re deep in development and can assure you that wait will certainly be worth it (oh yes it will!), we really wanted to give you something to enjoy in the meantime. So to thank you once again for your patience and support, we’d like to bring you this all-new, and totally unexpected new mode! Drum roll please…

Hard Core Mode is a new difficulty setting for the main “Shantae” mode in Shantae: Half-Genie Hero. This mode is designed to provide an old-school, tough-as-nails challenge to players who miss the days of rage-quitting and throwing controllers. This mode offers a stiff challenge to any player daring to test their mettle. The same studio that developed such unforgiving brutal bliss as Contra 4, Bloodrayne Betrayal, Double Dragon Neon, and the original Shantae has returned to its roots, preparing for you a scalding hot platter of anger food. Trust us, there is no mercy to be found in this new mode, and if you want to survive you’ll need to master the game completely. There is no mercy to be found here – it’s Hard Core!

Warning! This new mode is not for everybody! On the other hand, it IS for everybody since it will be FREE to Backers, and anyone who bought the game.

What to expect in Shantae: Half-Genie Hero HARD CORE MODE:

Again, HARD CORE MODE is free for everyone, and is included with Update 1.01

Thanks to everyone who reported a bug or sent us a video. Twitch streams, Let’s Play videos, message board comments – it’s all helped us make the game better. The first game stability update (Update 1.01) will arrive on March 6th, and includes:

We’re supporting every platform in every territory with this update. So if your particular version doesn’t update on Monday at 9:00 AM PST, it will soon! This includes retail versions.

The team is hard at work on DLC! Risky Boots Mode is coming along beautifully, and our animation team is almost done bringing Risky to life. Now we’re creating custom level content for her, and we expect to be working on this mode through Spring. We’ll share more details soon, so please hang in there and enjoy HARD CORE MODE in the meantime.

Last but not least, are you buying the new Nintendo Switch? The team over here is excited for Switch, and WayForward is a Switch developer. And yet, we haven’t announced… anything at all? It makes you think we’re up to something. It’s all so suspicious! Don’t worry – we’ll have more info for you soon. Enjoy launch day, and we’ll see you on the other side!

For the full update on Kickstarter, and everything else covered, click on the link below: