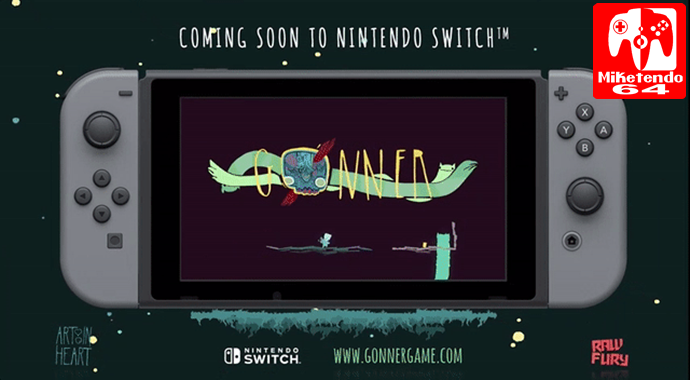 A Raw Fury Triple! Three Games for the Nintendo Switch

Today you all got to learn something we already knew, the names to all three titles Raw Fury are bringing to the Nintendo Switch!

Why would we say something like that, other than it being true? Well we actually interviewed Raw Fury earlier this month and while they did tell us about Dandara, we omitted it from the full written draft of our 3 Part long Raw Fury Interview, but now the cat is out the bag and Raw Fury have put out an announcement on each title, so naturally we’ve rounded them all up and have them right here for you:

We love GoNNER. We love its creator, Ditto, who is the most lovable guy we know. Fans love GoNNER to the tune of a 93% positive rating on Steam. The Independent Games Festival 2017 committee of judges loves GoNNER so they nominated it for the Best Audio award (and maybe it’ll win on Wednesday). And now, GoNNER will have the chance to be loved by all Nintendo Switch owners when it launches on the platform later this summer.

New content for GoNNER will appear exclusively on Switch, with that same content rolling out to the PC version afterward. We’ll have more info on GoNNER for Switch later this year, so don’t lose your head just yet!

Enter the Directionless World of Dandara:

Allow us to introduce you to Dandara—a Metroidvania-inspired adventure featuring a bold heroine trying to bring direction to a directionless world in a bizarre, gravity bending place teeming with beauty. We tip our hats to the developers Long Hat House for creating such a wondrous, curious universe, one we fell in love with the moment we were allowed to enter its portals.

Dandara is being developed for PC, consoles, mobile, and specifically with the Nintendo Switch in mind.

Dandara is a natural fit for the Nintendo Switch because Dandara supports both touch controls and controller, and both types of controls are unique from one another. Touch control for Dandara is not a virtual d-pad with buttons on-screen, it’s a carefully thought-out input scheme that was created specifically with touch in mind so that it feels intuitive and not combative or frustrating. Only the Nintendo Switch can accommodate both styles of play, and what we’ve been able to achieve with the console so far punches above our expectations. You can count on Switch exclusive features and functionality when Dandara launches later this year.

Dandara will be playable on Switch at GDC and on PC at PAX East! Let us know if you’re at either show so you can experience the fascination only a directionless world can bring.

Since the original Kingdom debuted on PC in 2015, its fans worldwide have asked for one major feature above all others—the ability to rule their domains side by side with another monarch in split screen co-op mode. Kingdom creator Noio is answering their call with Kingdom: Two Crowns, the next expansion due later this year for the ever-growing Kingdom series.

For more information on Kingdom and Gonner, we insist you follow our site as we will be posting two instalments of our Raw Fury interview this very week!