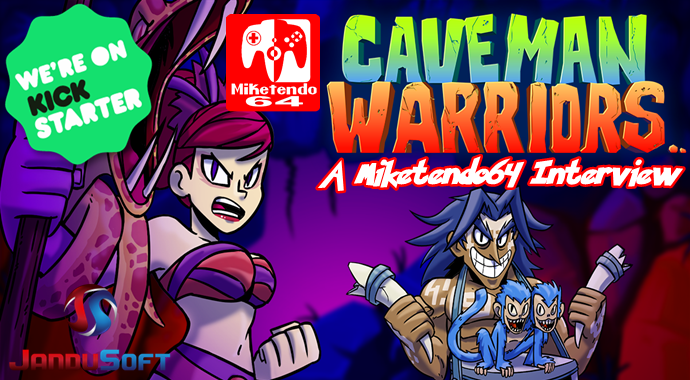 Any game that features a caveman as its protagonist, is awesome in my book, but a game that does that and falls into the Multiplayer Platformer Arcade game genre is a sure fire winner and that is exactly what JanduSoft’s Caveman Warriors is bound to become when it releases later on this year!

I have been in love with this game since I first played it and due to the fact I already interviewed its developers back in October last year, I’m already in contact with the devs, but because we hadn’t heard anything about the game in ages, we reached out to them and asked what’s the latest. They filled us in on a Kickstarter campaign they would be starting soon and asked us if we’d cover it. Naturally we said yes and in return could we ask them a few questions. Before you knew it, a quick interview was underway and now that the Kickstarter campaign is live, it’s time our interview went live too!

Get ready for another “A Miketendo64 Interview,” as this time we’re talking Caveman Warriors with Jose A. Andujar:

Miketendo64: “Before we start talking about Caveman Warriors, would you mind introducing yourself to our readers?”

Jose A. Andujar: “I’m Jose Antonio Andujar Clavell. My friends call me “Jandu” by friends and I’m the CEO and founder of JanduSoft.”

Jose A. Andujar: “Caveman Warriors is a platformer game in which you can either play solo or with up to 3 friends. In a prehistoric world everything was calm until an alien descends on the Earth and throws everything upside down. Choose a hero and hunt after the slippery alien! Each hero has different attacks and abilities that will prove useful at different points. Survive through our beautifully crafted 2D levels and beat anything you come across.”

Miketendo64: “Where did the inspiration for Caveman Warriors come from?”

Jose A. Andujar: “Caveman Warriors was inspired by New Super Mario Bros, Joe & Mac and Trine. We really wanted to make a platformer game with a local multiplayer mode, and New Super Mario Bros was our main inspiration for this, but we were also influenced by Joe & Mac for the take-on of the prehistoric era.”

Miketendo64: “How much has the game changed since I saw it at Barcelona Games World? Back in October you said you were going to overhaul its graphics.”

Jose A. Andujar: “All the graphics have been changed, which you can see for yourself in our new demo. We’ve also improved the gameplay and added a lot of sounds/music. Now it’s a new game, much better than the one you got a taste off at the BGW.”

Miketendo64: “Other than Barcelona Games World, has Caveman Warriors been playable at any other events and how has fan reaction been for it?”

Jose A. Andujar: “It was nominated Best Social Game at Paris Games Connection, so fan reaction has been good and and we hope to be at other events soon.”

The Four Protagonists of Caveman Warriors:

Miketendo64: “Since the game does feature four interesting characters with their own set of skills and colours, can you tell us about each one and which one is your favourite?”

Jose A. Andujar: “My favourite one is Brienne (the yellow one), because I really like how strong she is and the fact she can send enemies flying. As for a bit about each character, you can find that information over at our Kickstarter campaign.”

*While you can find character information by clicking here, we’ve also include the character bios below:

“The excellent cave warrior. He’s not the smartest nor is he the most handsome, but his ignorance allows him to throw himself at his enemies without a second thought. He is capable of taking out entire hordes with his brute strength.

Jack attacks using his stone axe to throw it with all his might at his enemies and throw them over. He can either hit nearby enemies with the axe or otherwise throw it at them if they are further away and cause even more damage. Don’t forget to pick your axe back up if it gets stuck in the ground though.

His special attack is called Unstoppable Onslaught and consists of Jack entering rage mode and charging forward, taking out of the way everything on his path. You better not stand in his way when you see him coming at you!”

“The Last Rider, Liliana The young but fierce maiden, Liliana, has put the “Alpha Males” around her in their place, becoming the most skillful Amazon of the tribe. With her spear she can deal quick and painful strikes to those that dare come too close, or use it as a lethal throwing weapon.

Her basic skill consist of piercing her nearby enemies with the sharp end of her weapon. She can make this attack even stronger by dashing at her enemies from a distance and throwing them in the air.

Liliana’s special attack is called SpearHead and consist of her concentrating all her strength in throwing her spear at an enemy or at a wall. If she hits a wall with her spear, it will get stuck in it and lets her and her allies use it as a platform to get to higher places.”

The Shaman of the Song, Moe:

“With two drums in hand and an air of greatness, he proclaimed himself shaman of the tribe. With several tricks up his sleeve, he manages to distract or attract his enemies.

Moe uses his rammers made of bone to hit his drums and hurt his enemies with the vibrations caused in consequence. He can also throw his rammers at a further away enemy. His rammers act as boomerangs and always find their way back to their rightful owner.

Moe’s special attack is called Monkey Song and is used to distract enemies and make them dance to the catchy rhythm and forget everything else they were doing.”

“The beauty of the tribe prefers to go out to hunt and get herself some tasty mammoth’s flesh than waiting in the cave and collecting fruits and berries. Thanks to her strong build and her heavy flesh stick, Brienne has become a relentless barrier in front of her enemies. Her attacks are heavy and slow, but very strong.

Brienne uses a stick with a piece of meat as a heavy club to hit her foes with an overwhelming force and can even throw them away into the air.

She also has a special ability called Behind Me! that consists of using her meatstick as a shield in front of her, protecting her and her allies from any oncoming attacks they might face.”

Miketendo64: “Back in October you admitted The NX (as it was known then), was our desired platform, has anything hanged since then?”

Jose A. Andujar: “Not at all. The Nintendo Switch is our desired console for this game, we begin the development of our game thinking about this console and we really want to port our game to Nintendo. We are a Nintendo developer, and we are talking to them in order to get our kit as soon as possible.”

Miketendo64: “And if you are able to get a Switch devkit, would you attempt to take advantage of the Joy-Con HD Rumble feature or would it just be a straight up port?”

Jose A. Andujar: “We will try as much as we can, but our main feature will be to play 4 players on the same Switch.”

Miketendo64: “Is there anything else you would like our readers to know about your upcoming Caveman Warriors game and its Kickstarter campaign?”

Jose A. Andujar: “Yeah, hurry up! You only have 72 hours for the early bird discount!”

Jose, I wish you the very best of luck with reaching your Kickstarter goal and getting a Switch devkit, as this game on Nintendo Switch would be something rather special, but if it doesn’t happen, that’s okay too. As long as it comes to the Wii U and I can play it once again, I will easily be delighted. And since I’ve said enough, it’s back to Jose for the final word, a message for the fans and our readers:

“We Caveman Smash! You help us on #Kickstarter!”


Categorised in: A Miketendo64 Interview, Interview, Nintendo Switch, Wii U