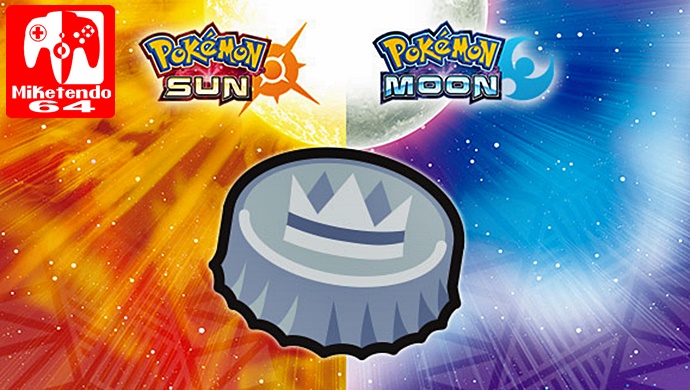 (Distribution) Snag a Bottle Cap from GameStop & A Couple Other Locations

“Between February 13 and March 5, you can stop by a participating GameStop store to get a code for a silver Bottle Cap in your Pokémon Sun or Pokémon Moon game. Use the Bottle Cap in the Hyper Training feature to boost the individual strength of one of your Pokémon’s stats to the max. Once you use it, your Pokémon will be even better prepared for tough battles ahead. Don’t forget that Pokémon must be Lv. 100 before they can participate in Hyper Training!

To get this silver Bottle Cap, just stop by a GameStop store and request a code card. Then, enter the secret code in your Pokémon Sun or Pokémon Moon game to add the Bottle Cap to your inventory. Trade the Bottle Cap with Mr. Hyper in the shopping mall at Hau’oli City to use Hyper Training with your Pokémon of choice. Be sure to enter your code into your game by May 13, 2017.Also, while you’re at GameStop, check out a Pokémon TCG Online promotion featuring three cool Pokémon. With any Pokémon TCG purchase of $11.95 or more, you’ll get a code that will unlock three Pokémon cards in your Pokémon TCG Online game: a hard-to-find Pangoro promo card, plus a Stufful card and a Bewear card from the new Pokémon TCG: Sun & Moon expansion. You’ll also get new Sun & Moon card sleeves in your game.

The Bottle Cap code and the Pokémon TCG Online promo will both be available at GameStop through March 5, or while supplies last.”

As for those of you in Europe, if you reside in Spain, you will be able to get your very own Bottle Cap by a GAME store and accessing the Nintendo Zone until the 12th of March. In France you can get the code from any Micromania stores until the 12th of March. If you are in Italy, you will need to get yourself over to GameStop and get the code before the 5th of March, whereas in Mexico, you can get your code directly from GamePlanet.

Best of luck to you all, and may you get your Bottle Cap!