Skip to content
A Miketendo64 Interview Interview Wii U 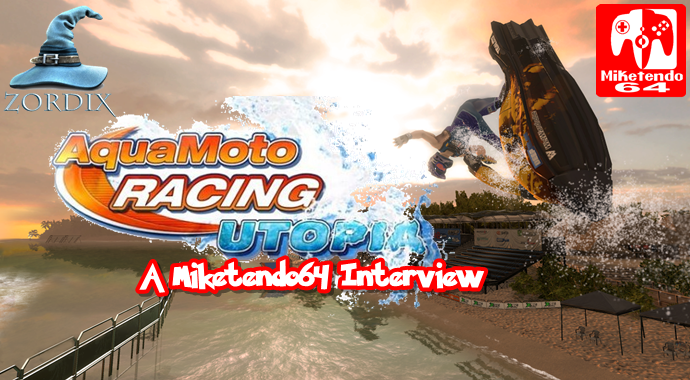 The year was 1996 and Nintendo had just brought out Wave Race 64. I loved that game, I would play it a lot and it was one of the first videogames I actually saw my dad play with his actual real-life jet-skiing friends. Sadly though, even though it had a continuation on the GameCube, no Personal Watercraft games could ever compare to Wave Race, let alone deserve the title of being a “Spiritual Successor,” until now.

Developed by Zordix AB and available now for PC and PlayStation 4, Aqua Moto Racing Utopia is also on its way to the Wii U and it really is as every bit as good as Wave Race 64. So because it is that good and reminds me of a game from my own childhood that did bring me joy, it’s only natural I’d want to know a little bit more about it and find out just how much longer Wii U owners need to wait before we can get our turn! So I emailed the guys over at Zordix, I sent them my questions and they have sent me answers responses.

Get ready for another “A Miketendo64 Interview,” as this time we’re talking Aqua Moto Racing Utopia with Matti Larsson:

The Move to Home Console:

Miketendo64: “First and foremost, who are you and can you tell us a bit about the decision to bring your games to home consoles?”

Matti Larsson: “I’m Matti Larsson, a game industry veteran, and in 2009 the founder of Zordix here in the North of Sweden.  After the huge success of our Moto Racing series of games it has finally become time to make them for TV consoles, and first out is Aqua Moto Racing Utopia, our personal watercraft game.”

Miketendo64: “While it is a game gaining momentum, there are still many gamers out there who have no idea what Aqua Moto Racing Utopia is, so would you mind describing it for them?”

Matti Larsson: “It is a really fun and beautiful modern water racer with challenging championships, extreme stunts, and many game modes including party modes and leisure, with online and even split screen multiplayer support.”

An Update on Aqua Moto Racing Utopia’s Wii U Development:

Miketendo64: “How is work on the Wii U version of Aqua Moto Racing Utopia going and are you any closer to announcing a release date?”

Matti Larsson: “We’re currently updating the code and working hard on the online features. We want to take our time to get it right. So no, there is no release date to announce just yet.”

Miketendo64: “Are there any plans to also bring Aqua Moto Racing Utopia to the Nintendo Switch?”

Matti Larsson: “Yes, that would be a very suitable platform for the game. I can imagine players playing the game anywhere, anytime, against everyone wherever there is Wifi!”

Miketendo64: “That would be cool.”

If Switch does Eventually Support VR, Zordix would happily bring a VR port of Aqua Moto Racing Utopia to the console:

Miketendo64: “And since we’re talking about the Switch. With there being rumours of Switch doubling as a VR console and Nintendo admitting they would incorporate VR for Switch, if they can figure out how to make it safe so that gamers can play for hours on end, would you do bring a VR version of Aqua Moto Racing Utopia to the Nintendo Switch?”

Matti Larsson: “I would love to do a VR version for Switch, if the rumours turn out to be true and VR does happen. We have been experimenting with VR and the game is fantastic that way. There are actually many possible expansions and cool new game modes I have in mind.”

Miketendo64: “Intended for a Summer 2016 release and then initially released in November on some platforms, how have you found fan reaction and has the later release impacted upon your sales?”

Miketendo64: “So a solid success then? Congrats.”

Miketendo64: “Since Aqua Moto Racing Utopia features a whole range of modes that will keep us gaming for ages, which is your favourite mode to play?”

Matti Larsson: “The classic Championship game modes have three unique divisions, like three games in one, and the Ski Division is my favourite right now. I know that I will enjoy Online play the most later though when we expand it with new features like the World Rankings (spoiler alert).”

Miketendo64: “And because we live in an age where DLC is becoming quite common. Are there any plans to add any more content to Aqua Moto Racing Utopia, such as more customisation and locations, besides World Rankings?”

Matti Larsson: “There are things under way. Several very different venues planned for an expansion have not been released, as well as cool costumes and special innovative game modes.

The main thing, however, is the upcoming world ranking system. We anticipate it will grow the fan base and online community for our games, and all of that is set to start in 2017. With our Moto Racing games, we’re in it for the long run.”

When it Releases, Wii U Version will have all added Content and “Polished Gameplay”:

Miketendo64: “When the Wii U version finally releases, Aqua Moto Racing Utopia will be available on quite a few different platforms. Having played each version personally, how do you find the experience for each platform?”

Matti Larsson: “Each has its own charm. The PC version on Steam with early access has worked a bit as a test bed for improvements and is fun for those who want to help us develop the game, the PS4 version is a polished video game and the Wii U version finally will enjoy all the benefits of added content and polished gameplay.”

Being the Spiritual Success to Wave Race:

Miketendo64: “Was Aqua Moto Racing Utopia always meant to be a spiritual successor to Wave Race, or is that something that just happened?”

Matti Larsson: “I think the main reason we’re doing a series of extreme racing games is the power-sports culture here in the north of Sweden, with snowmobile, PWC and ATV racing. In the summer time the sun never sets while riding PWC’s (Personal Watercraft) in the winter you can ride snowmobiles, and here in the north many have ATV’s as well.

We fondly remember the popular Wave Race titles, and since Nintendo isn’t making a new addition there is a huge interest in Aqua Moto Racing in particular. We were fortunate this time to get the financing that really let us do the genre justice.

We’re not looking for the exact same feel as Wave Race, but rather to find our own style and some of our own innovations along the way. It’s always an honour to be compared to old classics, and since many old WR fans really enjoy our game and some even call it a spiritual successor we’re very happy.”

Miketendo64: “Developing games is never easy, no matter how much experience you have in the industry, so what are your highs and lows during Aqua Moto Racing Utopia’s development?”

Matti Larsson: “The highs would be getting interactive water to run on the graphics processor, seeing the 30 techniques that goes into water come to life, as well as the advanced IK animation system allowing character animations to be combined with real time physics. Not to mention some lush graphics falling into place.

The biggest low would be realizing we had to do the PS4 and PC versions before the Wii U, since we started out on Wii U and was cheered on by many for that. It’s the harsh reality of being a small studio; that we had to refocus and do the best selling platform first. The advantage, on the other hand, is that we have been able to spend more time to make a much better and bigger game than first planned.”

Miketendo64: “While it is a shame the Wii U version still hasn’t released, at least a Wii U release is still happening. Silver lining and all that.”

PWC’s in the real World:

Miketendo64: “Since Aqua Moto Racing Utopia is a game that heavily involves Personal Watercrafts, it would be remiss of me if I didn’t ask this. While virtual PWC’S are a thing, real ones are even more so, so do you have an interest in PWC related sports and have you ever ridden one yourself?”

Matti Larsson: “Yes, we call them Runabout and Ski in the game, just like in the real world tournaments. A Swedish girl just won the Ski World Championships in December! Hooray! In real life, I can only ride the runabout models where you sit down, but in the game I am King of the Ski, a true Maverick pulling off stunts in the sky, after focused training on the controls! Which is what great gaming is all about.”

Giving the Wii U the Respect it Deserves:

Miketendo64: “Personally speaking, I found the Nintendo Wii U to be a great piece of kit. Sure it had its faults, but what console doesn’t? But as a developer and a fan, what do you think of the Wii U and what is your all-time favourite Nintendo console/platform?”

Matti Larsson: “The Wii U is a wonderful device that could have been huge, like the media centre of the home. For me it’s my favourite Nintendo platform so far.”

Miketendo64: “When all is said and done with Aqua Moto Racing Utopia, what comes next for Zordix AB?”

Matti Larsson: “Our next game is Snow Moto Racing Freedom, a snowmobile game where you carve your path through huge landscapes and race snow cross tracks. Also a nice fit for the Switch, I think.”

Matti, it is always an absolute pleasure to chat with you, especially when it is about a game such as Aqua Moto Racing Utopia. I look forwards to learning more about the extra content in the coming months and eagerly await the eventual Wii U release and possible Switch release. And since I’ve said enough, it’s back to Matti for the final word, a message for the fans and our readers:

“Have faith in our commitment to creating fun extreme sports racing games and don’t miss to compete online in the World Rankings when it becomes available! Lots to look forward to! And in the meantime, don’t forget to check out the 3DS version called Aqua Moto Racing 3D.”