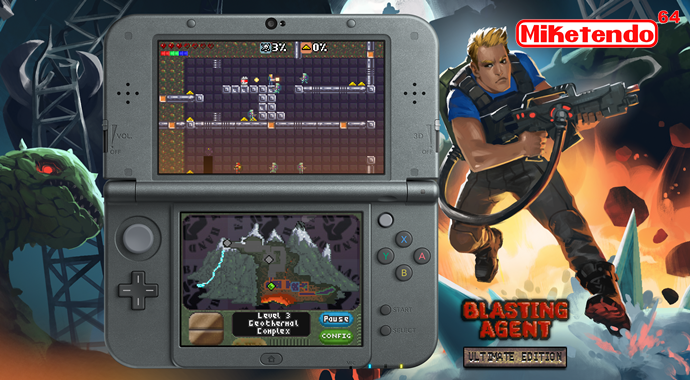 Blasting its Way to Blasting Agent, a Brand new Update!

When Ratalaika Games first brought Blasting Agent to both the Wii U and 3DS, some reviewers were divided. Some enjoyed the game, whereas others did not and some even believed it didn’t have enough content. Well that’s about to change!

It’s no secret that Blasting Agent is getting a new update, but the new update not only promises a new mode, (Boss Rush), but there will also be a new playable character and while she may not float like a Butterfly, she does however Sting like a Bee.

Having spoken to the CEO of Ratalaika Games, the update is finished and has been sent off to QA for both Wii U and 3DS. Provided everything goes as planned, the update will be available for free download from the eShop in March and we’ve got a quick little teaser for the new update right here:

For anyone wanting to know more about the new update and the new Heroine, details will be provided at some point in the coming weeks. In fact it might be worth following Ratalaika Games on Twitter and Facebook because Adrian has told me there will be quite a few announcements being made during the next, which includes Plantera’s dual Nintendo platform release, and some PlayStation related news as well.

But since we touched on PlayStation, Blasting Agent is still set to release on both PlayStation 4 and PS Vita, with the update, but as far as a release date goes, there is nothing that can be commented on. The same can be said for the Japanese 3DS release of Blasting Agent. Seriously though, keep your eyes peeled on Ratalaika. They could very well be the Spanish indie company to keep an eye on this year!