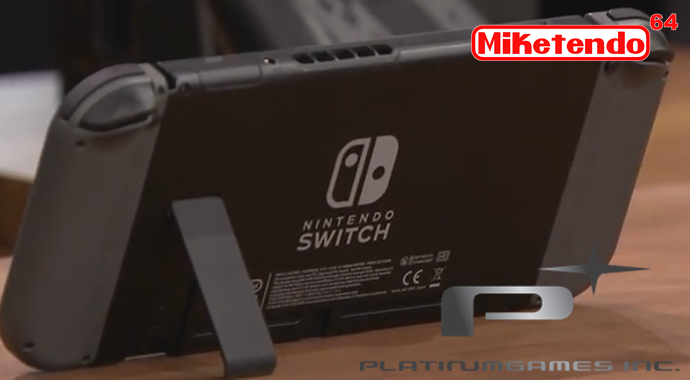 Once again, OBE1plays is back with another of his Nintendo Switchmas videos, except this time he’s doing it live!

So what got leaked this time around for Day 9 of Nintendo Switchmas? Well this time PlatinumGames popped up and the news that they have been working on a Switch exclusive since 2014. As always, here’s a summarised contents and the video in question:

OBE1plays also said that Day 10 of Nintendo Switchmas, will see him sharing tidbits regarding the upcoming Switch , but let’s talk about the game not being Bayonetta 3. Firstly I believe that, one because it matches up with what I’ve heard, but also Bayonetta 3 was a talking point last year, when Bayonetta Director Yusuke Hashimoto asked fans what game would they rather see him work on next. He even expressed in an interview posted on the 17th of June, 2016 that although he does have ideas for it, and has written outlines for it, during the time of the interview, he wasn’t working on a Bayonetta 3. However once his work on Scalebound is over, which releases this year, he did admit to wanting to return to the series, which means unless he was deceiving us then and he wasn’t, then he wouldn’t even officially start work on it until this year and should Bayo 3 be the game that was started in 2014, than that would mean for over 2 years, the game would have been without a director.

I would love a Bayonetta 3, I really would and the Nintendo Switch would be the perfect platform for it, but everything that’s been said in the past and being said now, just doesn’t add up, but there has been lots of Bayonetta 3 talk within the company, more so than usual, so it does sound like Bayonetta 3 is being developed, (which one source says it is, but states release wouldn’t be until Q4 2018 at the earliest), especially since “certain actions are being taken,” but given what they posted recently, I would wager this Switch exclusive has something to do with it:

“Last year, PlatinumGames celebrated its 10th anniversary, and it proved to be a major turning point in our company’s history. We’ve worked hard to reorganize our company in order to achieve further progress in the next 10 years, such as by reforming the company structure and by improving the working conditions. I have also told all of the company staff about my intentions to create a completely new and original company-owned IP within 3 years. Ever since PlatinumGames was founded, we’ve always dreamed of owning our own IP, and last year we made the first steps towards achieving that goal.”

The words you can see above, are those of Kenichi Sato, CEO of PlatinumGames. A man who has expressed a lot of interest in bringing The Wonderful 101 to the Nintendo Switch and a few other titles, but also a man who has possibly teased information about the exclusive title. When he says “We’ve always dreamed of owning our own IP, and last year we made the first steps towards achieving that goal,” he is in fact talking about 2015 and while development for the Switch title started in 2014, (let’s not forget it could have started as a Wii U title), it could have very easily been initial development, establishing story, character designs and the like, with nothing actually happening until 2015, which would add up to what he recently said as it would mean true development began in 2015, which is when they made their “first steps.”

I wish there was more I could say about all this, but as of right now, I can only confirm they are working on a Switch exclusive as we speak. There will be a Bayonetta 3 and it may feature amiibo support, but they are completely separate. So again to clarify, the leaked OBE1plays game is not Bayonetta 3, but he has been doing a good job lately with all his leaks so if you haven’t subscribed to his channel already, you may want to consider doing it today.

Be sure to check back in the future, as there will be more Bayonetta news to come this year and there will also be our coverage of Nintendo Switchmas Day 10, which you can expect to be posted within an hour or two of the video making its way to YouTube.