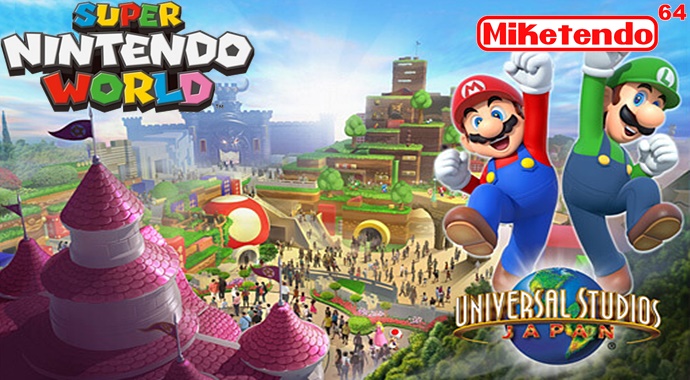 COMING TO UNIVERSAL STUDIOS JAPAN®
in Time for the 2020 Tokyo Olympics
The World’s First*1 Nintendo Themed Area Being Developed
with More than 50 Billion Yen
December 12(Mon), 2016
“SUPER NINTENDO WORLD™” is coming to Universal Studios Japan and will be the first such opening in the world*1, featuring globally renowned characters and game worlds from Nintendo. Super Nintendo World is targeted to open in time for the 2020 Tokyo Olympics. While Universal Studios Japan will be the first location to open, Nintendo themed areas are also coming to Orlando and Hollywood as announced by Nintendo and Universal Parks & Resorts on November 29, 2016.
Super Nintendo World will be comprised of expansive and multilevel environments filled with unprecedented, state-of-the-art rides*2, interactive areas, shops and restaurants, all featuring Nintendo’s most popular characters and games. Development cost at Universal Studios Japan is currently expected to exceed 50 billion Yen. Super Nintendo World will be developed mainly using the park’s current parking area and part of an area designated for future expansion. Katsuhiro Miyamoto, Professor Emeritus of Kansai University estimates that Universal Studios Japan — after opening Super Nintendo World — will bring economic benefits following its opening of approximately 6.2 trillion Yen for the Kansai region, 11.7 trillion Yen for Japan as a whole, and will create approximately 1.1 million jobs in Japan within a decade after opening*3. Universal Studios Japan will introduce the wonder of the world-class, Japan-based entertainment brand of Nintendo not only to Japan but to the world.

Super Nintendo World will feature characters and themes from the “Super Mario” series, which has continued over the years to win the hearts of devoted fans around the world. The attraction area will also feature a variety of other globally popular Nintendo characters. Nintendo characters and the worlds they inhabit will be re-created at the highest level of quality through the strong partnership between Mr. Shigeru Miyamoto, Creative Fellow at Nintendo, and Mark Woodbury, President of Universal Creative, renowned for creative and technical excellence. Super Nintendo World will allow guests to fully immerse themselves and all five senses in the worlds of Nintendo, and is expected to attract guests from Japan and the world over.

*1 Based on an internal survey of Nintendo brand characters and their worlds at other parks and themed areas around the world
*2 Based on company research of the theme parks in operation worldwide in November 2016
*3 Announced by Kansai University (December 12, 2016)